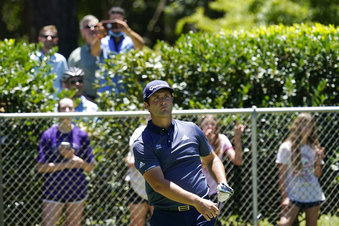 The PGA returned to action yesterday with Justin Rose and Harold Varner grabbing the lead at 7-under 63 after the opening round of the Charles Schwab Challenge at Colonial, with Justin Thomas among those a stroke back. Tom Lehman, a 61-year-old former champion at Colonial, got in on the act with a 65.
Sung Kang made a hole-in-one on the 13th hole and didn’t realize it until he was 50 yards from the green.
Ryan Palmer, a Colonial member who raised money for COVID-19 relief efforts during the shutdown, was chosen to hit the first official shot on the PGA Tour in three months. Colonial came to a standstill at 8:46 a.m. when everyone on the course honored a moment of silence for the death of George Floyd and the outrage it has sparked worldwide on racial injustice.

The NFL has extended virtual offseason programs for teams through June 26. Although team facilities have opened for key personnel, coaches and players rehabilitating injuries, healthy players have been barred from the complexes.

The NFL is committing $250 million over 10 years to social justice initiatives, targeting what it calls “systemic racism” and supporting “the battle against the ongoing and historic injustices faced by African Americans.”
The league, which has raised $44 million in donations through its Inspire Change program, announced the additional $206 million commitment Thursday. It plans to “work collaboratively with NFL players to support programs to address criminal justice reform, police reforms, and economic and educational advancement.”

NHL training camps will open July 10 if the league and players’ union can reach an agreement to resume the season. Setting the date gives the 17% of players overseas time to make arrangements to return in light of U.S. and Canada quarantine regulations.

When the Chicago Blackhawks left the ice after their last game, they had little chance of making the playoffs. Whenever they play their next game, it sure looks as if they will be one of 24 teams with a shot at the Stanley Cup. Welcome to the strangest postseason berth in franchise history, one so unusual that it isn’t exactly a playoff appearance at the moment. Assuming everything goes according to plan and the final details are ironed out between the league and the players’ union, the Blackhawks will play the Edmonton Oilers in a best-of-five qualifier series for the playoff bracket.

The NCAA football oversight committee has finalized a plan for an extended preseason that would include an additional two weeks for teams to hold walk-throughs.
The proposal goes to the Division I Council, which meets Tuesday, and is expected to be approved.
A proposed schedule permits teams to conduct the maximum six hours of unpadded walk-throughs per week while also requiring two days off for the players. The extra two weeks of walk-throughs, weight training, conditioning and film study will be limited to 20 hours per week total and can begin 14 days prior to the start of normal 29-day preseason practice. Teams are allowed to begin preseason practice 29 days before their scheduled first game.

A University of Michigan gymnast from decades ago is speaking out as a victim of Robert Anderson, the deceased campus sports doctor. Ward Black is 68 years old and lives in Las Vegas. Black says he was molested by Anderson during annual physicals and while seeking help for injuries, from 1969 to 1973. Black says he tried to speak to his coach about Anderson back in 1969, but Newt Loken “changed the subject.” Hundreds of former athletes have made complaints about Anderson. The university says it believes athletes were assaulted. It says it wants to compensate victims outside court.