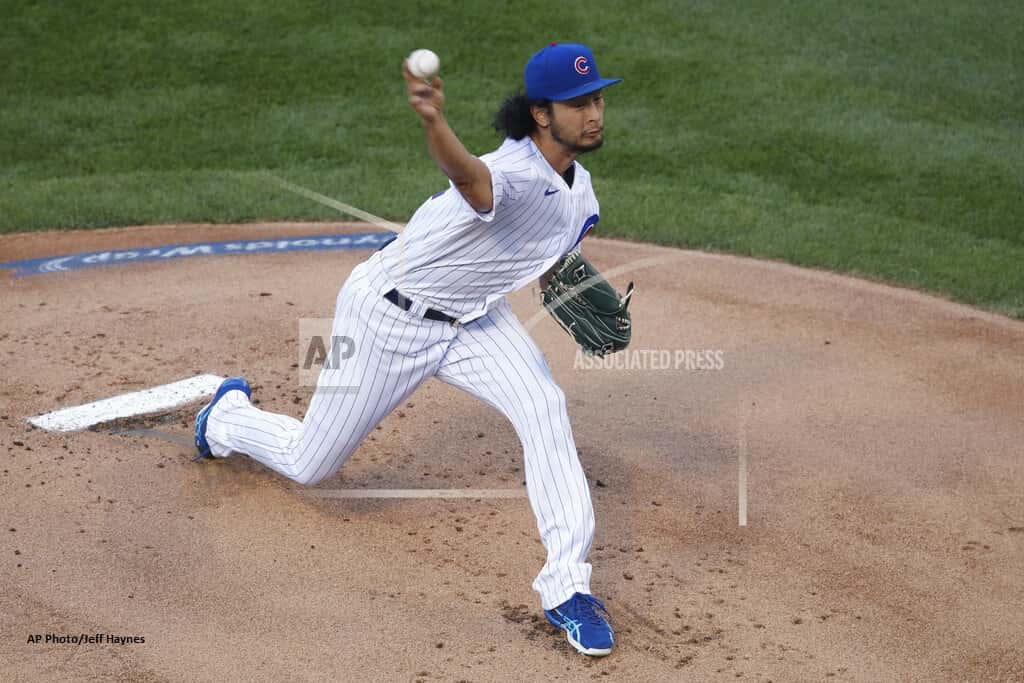 Baseball last night…
Cubs 4,  Milwaukee 2
Yu Darvish took a no-hitter into the seventh inning in his third straight dominant start, and the major league-leading Cubs defeated Milwaukee 4-2. Darvish allowed just one hit — Justin Smoak’s towering solo homer to right field with one out in the seventh inning on his 98th pitch — before being relieved by Casey Sadler to start the eighth. The 33-year-old right-hander from Japan struck out 11 and threw 104 pitches. Before Smoak’s drive, Darvish allowed only three baserunners. Kyle Schwarber homered in the second and Chicago improved to 13-3 for the first time since 1907.

NHL Playoffs yesterday…
Vegas 4,  Blackhawks 3   OT
Reilly Smith scored in overtime, Robin Lehner made 22 saves and the Vegas Golden Knights beat the Chicago Blackhawks 4-3 to take a 2-0 lead in the first-round series. Blackhawks goaltender Corey Crawford stopped 35 of the 39 shots he faced in a losing effort. This was the third game already in the first round to go to overtime. Tampa Bay beat Columbus in the fifth overtime Tuesday, and Boston beat Carolina in double OT Wednesday. Smith’s goal came 7:13 into the first OT. The Golden Knights were without regular-season leading scorer Max Pacioretty, who only joined them in the Edmonton bubble last week.

The White Sox series opener today against St. Louis has been postponed until Saturday, giving the Cardinals an extra day to recover from their coronavirus outbreak. The two teams will now play a doubleheader Saturday in Chicago.

The Big Sky Conference has voted to postpone all fall sports competition until the spring because of concerns about the coronavirus pandemic. They had previously just postponed football, but now all fall sports are included.

A group of senators led by Cory Booker of New Jersey and Richard Blumenthal of Connecticut has released a plan for reforming college sports with an athletes bill of rights. It calls for college athletes to have the ability to earn money for their names, images and likenesses with “minimal restrictions.” The senators also want to ensure for the athletes long-term medical coverage and treatment, enforceable medical standards, academic freedom and revenue sharing agreements. The NCAA is in the process of changing its rules to permit athletes to earn money off their names, images and likenesses for things like endorsements and appearances. The association has asked for help from Congress to relieve pressure from state lawmakers.

Harold Varner III, Tom Hoge and Roger Sloan share the clubhouse lead after shooting 8-under 62 in the first round of the PGA’s Wyndham Championship in North Carolina.
Hoge looked like he might have a shot at 59 after he went eagle-birdie on the 15th and 16th holes to reach 9 under. There were 33 players on the course when the round was suspended due to bad weather.

In tennis, Novak Djokovic says he will enter the U.S. Open and the hard-court tune-up tournament preceding it in New York this month. Reigning U.S. Open champion Bianca Andreescu has pulled out of the U.S. Open. She says the coronavirus pandemic prevented her from properly preparing for competition.