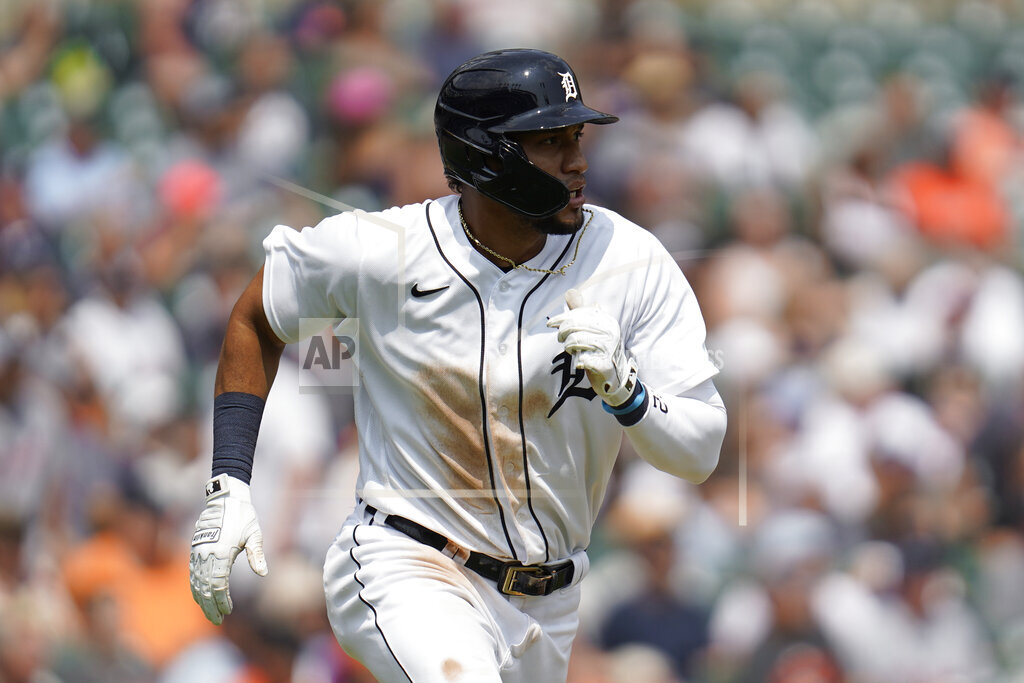 Tigers 8, Red Sox 1 – Reyes 2 triples, Tigers beat slumping Red Sox 8-1
Victor Reyes tripled twice and drove in three runs, Tarik Skubal pitched five scoreless innings, and the Detroit Tigers beat the Boston Red Sox 8-1. Skubal allowed five hits and struck out four. Robbie Grossman hit a leadoff homer in the bottom of the first. He departed the game prior to the third with a left elbow contusion after getting hit by a pitch. Jonathan Schoop contributed two hits and two RBIs for Detroit. The Red Sox lost for the sixth time in seven games and dropped 1 1/2 games behind idle Tampa Bay in the AL East.

Royals 3, White Sox 2 – Lynch, 4 relievers lead Royals to 3-2 win over White Sox
Daniel Lynch and four relievers held the Chicago White Sox in check, and Emmanuel Rivera’s line drive was misplayed into an early two-run double that helped the Kansas City Royals hang on for a 3-2 victory. Kansas City won its second consecutive game, while the AL Central-leading White Sox lost for the ninth time in their last 14. Chicago has scored two runs or fewer in three of its past four games. Jake Brentz worked a hitless ninth inning for his first major league save. Jose Abreu homered for the White Sox.

Rockies 6, Cubs 5 – Still here: Story homers twice, Rockies beat Cubs 6-5
Trevor Story hit two home runs, including a go-ahead two-run drive in the fifth inning, and the Colorado Rockies hung on to beat the Chicago Cubs 6-5. Sam Hilliard and Connor Joe also homered and Brendan Rodgers extended his hitting streak to 12 games with two singles. The Rockies took two of three from the Cubs. Wilson Contreras hit a two-run double in Chicago’s four-run fifth. The Cubs concluded their six-game trip with a 2-4 mark after a series of trade deadline deals that saw the departure of stalwarts Anthony Rizzo, Kris Bryant and Javier Báez. Story was the subject of trade rumors before the deadline.

Steelers 16, Cowboys 3 – Steelers use strong 2nd half to beat Cowboys 16-3
The Pittsburgh Steelers followed a stumbling first half with a strong final 30 minutes to beat Dallas 16-3 in the first NFL preseason game in two years. Last season’s exhibition games were canceled due to the COVID-19 pandemic. So maybe the enthusiastic crowd was an indication that even for a match between teams using very few regulars, the hunger for pro football has not faded. Or maybe it was simply a matter of two of the league’s most popular franchises being on the field in the Hall of Fame game, regardless of how many backups were in action.

NFL – Cousins returns to Vikings quarterback room after quarantine
Minnesota Vikings quarterback Kirk Cousins has been activated from the COVID-19 reserve list. He completed the NFL’s required five-day quarantine for unvaccinated players deemed a high-risk close contact with an infected person. The Vikings also activated Nate Stanley to bring their quarterback cadre close to full strength after a tenuous stretch of training camp practices. Rookie Kellen Mond tested positive and remains on the reserve list away from the team. The absence of Cousins, Mond and Stanley left Jake Browning as the only quarterback Saturday. Browning is vaccinated.

NCAAFB – Notre Dame to play Navy at MetLife Stadium in 2024
Notre Dame and Navy will play their 2024 football game at MetLife Stadium in New Jersey’s Meadowlands sports complex. This will mark the eighth time the sports complex has hosted a Navy-Notre Dame game. It will be the first time since 2010, when Navy defeated the Irish 35-17. The Navy-Notre Dame series was the longest continuous intersectional rivalry in college football — 93 consecutive years, — before the pandemic forced the cancellation of the 2020 game. The two schools will play Nov. 6 in South Bend, Indiana. MetLife Stadium will host this year’s Army-Navy game on Dec. 11.

NCAAFB – Expanded playoffs means more games and … more injuries?
Few college football coaches know the mental and physical grind that comes with navigating an extended playoff better than Chris Klieman.  The Kansas State coach was formerly at FCS juggernaut North Dakota State, where teams routinely play for national titles in a division where that means playing 15-plus games. Klieman says it’s a grind but you find a way to get through it when a title is on the line. The College Football Playoff is considering expanding from four to 12 teams to determine its champion, reserving six spots for the highest-ranked conference champions with the rest going to at-large selections.

Soccer – Barcelona says it’s parting with Messi
Barcelona has announced that Lionel Messi will not stay with the club. The clubs says the Spanish league’s financial regulations made it impossible to sign the Argentina star to a new contract.  Messi is leaving after 17 successful seasons in which he propelled the Catalan club to glory, helping it win numerous domestic and international titles since debuting as a teenager.  Meanwhile, Manchester City has broken the British transfer fee record to sign midfielder Jack Grealish (GRAY’-lihsh) from Aston Villa. The defending Premier League champs paid a fee of 100 million pounds, or $139 million.

Golf – PGA – English has St. Jude lead
Harris English matched his lowest score in taking the first-round lead in the PGA’s FedEx St. Jude Invitational.  English fired an 8-under 62 to build a two-shot advantage over Jim Herman, Carlos Ortiz, Ian Poulter and Matthew Wolff.  Bryson DeChambeau, Scottie Scheffler and Marc Leishman are another shot back at 65. DeChambeau returned to competition after missing the Tokyo Olympics because of a positive test for COVID-19.

Blue Bombers 19, Tiger Cats 6 – Blue Bombers top Ti-Cats in CFL return, ’19 Grey Cup rematch
Zach Collaros threw two touchdown passes to Kenny Lawler and the Winnipeg Blue Bombers beat the Hamilton Tiger-Cats 19-6 on Thursday night in the first Canadian Football League game since the teams met in the 2019 Grey Cup. A fully vaccinated crowd of 29,376 attended the game at IG Field, the largest crowd at a sporting event in Canada since the COVID-19 pandemic that wiped out last season. Collaros led the Blue Bombers over the Tiger-Cats again, 620 days after Winnipeg beat Hamilton 33-12 in Calgary in November 2019 for its first title since 1990.

Beach Volleyball – US wins beach gold medal, Ross has a set
April Ross now has the complete set of Olympic beach volleyball medals. She joined with Alix Klineman to win the gold medal in Tokyo to go with the silver she won in London and the bronze in Rio de Janeiro. The Americans beat Mariafe Artacho del Solar and Taliqua Clancy of Australia 21-15, 21-16 under a blazing sun. The match was mercifully quick for the biggest crowd yet at Shiokaze Park — about 60 people in the temporary stadium that seats 9,600. Playing in 92-degree temperatures under the hot Tokyo sun, the Americans finished off the Aussies in just 43 minutes.

Shotput – ‘We did it’: Crouser’s gold a tribute to his fallen grandpa
Ryan Crouser broke his own Olympic record on his way to defending his shot put title. It was a tribute to his late grandfather. The American world record-holder even wrote a note days before the competition in the Tokyo Games that predicted the gold medal. Larry Crouser died shortly before Ryan left for Tokyo. It was years ago in Larry Crouser’s backyard that Ryan attempted his first toss with the heavy metal ball that would shape his life. U.S. teammate Joe Kovacs finished second and Tomas Walsh of New Zealand was third. That was the exact same podium as five years ago at the Rio de Janeiro Olympics.

Losses in track, wins on field: Another rocky day for USA
A five-minute burst of action near the backstretch of the Olympic track served up the perfect snapshot of what is going right and all that is going wrong for the U.S. track and field team in Tokyo. Katie Nageotte went running up to the stands to celebrate a gold medal at one moment in the pole vault pit. But Michael Norman could not sustain the pace in the 400-meter race at the next. Norman finished fifth to cap Day 7 of the nine-day meet at the Olympic Stadium. The U.S. men sprinters left the stadium not having won a single final.

Two coaches removed from Tokyo Olympics in Belarus case
Two Belarus team coaches have been removed from the Olympics after being involved in trying to send sprinter Krystsina Tsimanouskaya back to their country. The International Olympic Committee says the credentials of Artur Shimak and Yury Maisevich have been canceled and removed. Both men are due to be interviewed by an IOC disciplinary panel formed to investigate what happened to Tsimanouskaya. Shimak and Maisevich continued to have contact with Belarusian athletes since Sunday. The IOC linked them to taking Tsimanouskaya in a car to the airport to put her on a plane to Belarus because she criticized team coaches.