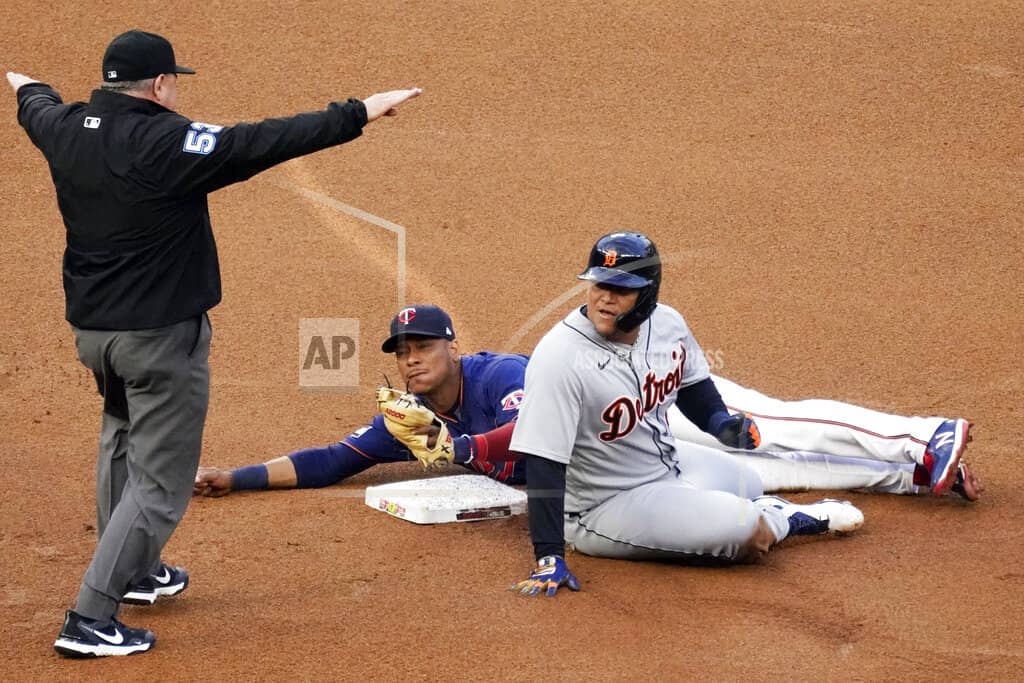 Twins 5, Tigers 3 – Jeffers, Sanó hit homers, lead Happ, Twins over Tigers 5-3
Ryan Jeffers and Miguel Sanó homered, leading J.A. Happ and the Minnesota Twins over the Detroit Tigers 5-3. Jeffers’ homer with one out in the fifth inning marked Minnesota’s first runner against Tigers starter Tarik Skubal. Sanó started the seventh with his 15th homer of the season, tying it at 3. Max Kepler beat out an infield single and Gilberto Celestino followed with another grounder. Detroit tried to turn a double play, but Kepler was called safe at second and Celestino beat the relay throw to first. The Tigers requested a replay review, and it showed second baseman Willi Castro pulled his foot off the bag too quickly, keeping Kepler safe. After a sacrifice bunt, reliever José Cisnero unleashed a wild pitch that scored the go-ahead run.

Phillies 8, Cubs 0 – Miller hits 3 HRs, Phillies rout reeling Cubs 8-0
Brad Miller hit three home runs in a game for the first time in his career, and the Philadelphia Phillies routed the sinking Chicago Cubs 8-0. Miller hit a solo drive in the third inning and added two-run homers in the fifth and seventh innings. With a chance at joining the other 18 players who have hit a record four home runs in a game, Miller popped up in the ninth. He grounded out in his first at-bat. Zach Eflin tossed six crisp innings as the Phillies took three of four games at Wrigley Field. Didi Gregorius added a two-run shot and All-Star catcher J.T. Realmuto scored on a double steal. The Cubs lost for the 12th time in 13 games.

MLB – With fans back, ballpark workers enjoy chance to return
Ballpark employees have had a chance to return to work after the pandemic hit many of them hard. It would be premature to say the scene at major league ballparks has completely returned to normal, but there’s no question this season has been a step in that direction. Delaware North, a concessionaire that operates at 11 big league ballparks, says it has recalled around 8,000 employees and hired around 3,000 new ones since Jan. 1 at those parks. For many employees, the past couple months have been a welcome respite after a tumultuous year.

Suns 118, Bucks 108 – Halfway there: Suns beat Bucks for 2-0 lead in NBA Finals
The Phoenix Suns have never been closer to an NBA title. Devin Booker scored 31 points, Chris Paul had 23 and the Suns beat the Milwaukee Bucks 118-108 on Thursday night to take a 2-0 lead. The Suns surged ahead late in the first half, withstood Giannis Antetokounmpo’s all-around effort to bring the Bucks back, and walked off winners again as fans swung orange rally towels all around them. Antetokounmpo finished with 42 points and 12 rebounds in his second game back after missing two games with a hyperextended left knee. Game 3 is Sunday in Milwaukee.

NCAAMBB – UNC, Florida, Michigan, OU to play in Jumpman Invitational
The Charlotte Sports Foundation has announced a three-year deal with Jordan Brand to host the Jumpman Invitational. It’s a holiday college basketball event featuring North Carolina, Florida, Michigan and Oklahoma, the original four schools to sign a partnership with Jordan Brand. The inaugural event is scheduled for Dec. 20-21, 2022 and will feature both the men’s and women’s teams playing in one game per year. The games will be played Charlotte’s Spectrum Center, home of the NBA’s Charlotte Hornets. The Hornets are owned by six-time NBA champion Michael Jordan.

Olympics – Fans banned at Olympics with Tokyo under state of emergency
Fans will be banned from Tokyo-area stadiums and arenas when the Olympics begin in two weeks. The city’s governor made the announcement on Thursday after meeting with organizers of the pandemic-postponed games. The Japanese government put the capital under a COVID-19 state of emergency because of rising new infections and the highly contagious delta variant. It’s a serious blow for Japanese taxpayers and local organizers of the games, which already had been postponed from 2020 by the coronavirus. Hundreds of millions of dollars in ticket revenue will be lost, and that must be made up by the government.

Tennis – Wimbledon – Barty and Pliskova to meet in final
Ash Barty will face Karolina Pliskova on Saturday in the first Wimbledon women’s final for both.  Barty beat 2018 Wimbledon champion Angelique Kerber, 6-3, 7-6 to become the first woman from Australia to reach the title match at Wimbledon since Evonne Goolagong won the trophy 1980. Barty was two points from dropping the second set, 6-2 before holding serve and breaking Kerber twice to force a tiebreak.  Pliskova then advanced by coming back to eliminate second-seeded Aryna Sabalenka 5-7, 6-4, 6-4. Pliskova overcame Sabalenka’s 18 aces with 14 of her own. Pliskova finally broke for a 3-2 lead in the second set and again in the opening game of the third to take control.  This is the first team either player has advanced past the fourth round at Wimbledon. Barty owns the lone Grand Slam title between the two, taking the 2019 French Open.

Golf – PGA – Munoz, Hadley top leaderboard
Sebastian Munoz closed with five straight birdies for an 8-under 63, turning a solid day into a share of the lead with Chesson Hadley at the PGA’s John Deere Classic. Hadley played bogey-free and had back-to-back birdies on three occasions. He was helped by making three of his birdies from 25 feet. Hank Lebioda, Chez Reavie and Camilo Villegas opened with 64s. Lebioda finished one shot out of the playoff last weekend in the Rocket Mortgage Classic.

Golf – Champions – Andrade, Ames share lead
Billy Andrade and Stephen Ames shot 5-under 65s to share the first-round lead in the U.S. Senior Open.  Andrade had five birdies and no bogeys on an Omaha Country Club course that dried out after the sun broke through and the wind came up in the afternoon. Ames had seven birdies and two bogeys in the morning session.  Wes Short Jr. shot 66.

Golf – LPGA – Hataoka outstanding in taking 1st-round lead
Nasa Hataoka flirted with an LPGA record-tying 59 while building a four-stroke lead in the first round of the Marathon Classic in Ohio.  Hataoka settled for a 10-under 61 with pars on the final two holes. Annika Sorenstam is the only player to shoot 59 on the LPGA Tour, accomplishing the feat in 2001.  Hataoka had six straight birdies and added three more in a row on Nos. 5-7 before closing her bogey-free round with the two pars.  Lauren Stephenson is second after a 65.