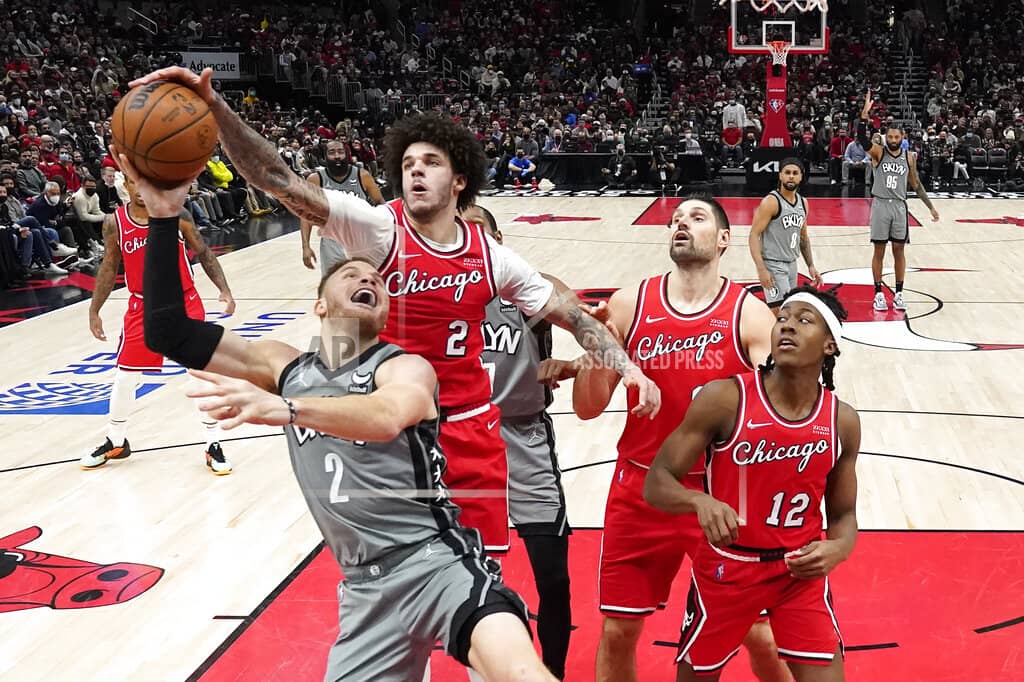 NBA – Bulls G Ball to have knee surgery, sidelined 6-8 weeks
The Chicago Bulls say guard Lonzo Ball will have arthroscopic surgery on his left knee and is expected to be out six to eight weeks. Ball has missed three games since a 42-point loss to Golden State last week. Coach Billy Donovan said Wednesday the team had switched up his treatment, hoping he would avoid surgery, after he didn’t respond well to the initial regimen. Ball had the same knee scoped in 2018 when he was with the Lakers.

Pacers 121, Warriors 117 – OT – Undermanned Pacers stun Curry, Warriors 121-117 in overtime
Keifer Sykes hit a go-ahead 3-pointer with 1:41 left in overtime and a layup the next possession, Chris Duarte scored 27 points, and the undermanned Indiana Pacers beat Stephen Curry and the Golden State Warriors 121-117. Golden State got one more chance with 6.4 seconds left after a jump ball and Klay Thompson checked in but couldn’t get a shot off. Curry scored 39 but none in overtime, missing a 3 from the top of the arc with 16.5 seconds left in the extra session.

NFL – Bears interview Leftwich, McKenzie for coach, GM positions
The Chicago Bears interviewed Tampa Bay Buccaneers offensive coordinator Byron Leftwich and longtime NFL executive Reggie McKenzie for their coach and general manager jobs. Tampa Bay has set franchise records for points and touchdowns in each of Leftwich’s three seasons as offensive coordinator. The Buccaneers won the Super Bowl last season after Tom Brady arrived from New England. McKenzie was a senior personnel executive with the Miami Dolphins the past three seasons. He spent 18 years in Green Bay’s front office and had a hand in two Super Bowl championships. He was the Packers’ director of football operations from 2008 to 2011 and was the Oakland Raiders’ general manager from 2012 to 2018.

Cowboys’ Prescott fined $25,000 for comments about officials
The NFL has fined Dallas Cowboys quarterback Dak Prescott $25,000 for comments condoning fans throwing objects at officials after a wild-card loss to San Francisco. The fine comes after Prescott apologized in a series of tweets. When told after the game that fans were throwing objects at officials, Prescott said, “Credit to them then.” He initially called it “sad” because he was told the objects were being thrown at Dallas players. The Cowboys blamed officials for the club running out of time trying to set up for a final play in the 23-17 loss to the 49ers.

NCAA – NCAA ratifies new constitution, paving way to restructuring
NCAA member schools have ratified a new, pared-down constitution. It clears the way for a decentralized approach to governing college sports that will hand more power to schools and conferences. The NCAA’s three divisions will now be empowered to govern themselves. College sports leaders hope that will reduce legal exposure for the NCAA after a resounding rebuke from the Supreme Court last year. For Division II and III, there will be little change. But there could be a massive overhaul in Division I, which has hundreds of big schools and millions of dollars tied closely to football and basketball.

(8) Michigan 83, Wisconsin 44 – No. 8 Michigan rolls past Wisconsin 83-44, moves to 16-2
Naz Hillmon had 21 points and 10 rebounds, and No. 8 Michigan rolled to an 83-44 victory over Wisconsin. Leigha Brown scored 11 points and Cameron Williams added 10 for Michigan, which won its fourth game in a row and is off to the best start in school history. Sydney Hilliard had 13 points for Wisconsin, which lost for the fourth time in five games. Michigan put the game out of reach in the second quarter. After the Badgers scored the first basket of the period, the Wolverines went on a 25-3 run to take a 44-17 halftime lead.

MLB – MLB’s snail-paced lockout talks to resume with union offer
Locked out baseball players plan to make a counteroffer to management on Monday, 11 days after clubs gave the union a proposal when snail-paced negotiations resumed following a 42-day break. The players’ association asked Major League Baseball to schedule a negotiating session. There is dwindling time to reach an agreement in time for spring training to start as scheduled on Feb. 16. Opening day on March 31 is increasingly threatened, given the need for players to report, go through COVID-19 protocols and have at least three weeks of workouts that include a minimal number of exhibition games.

MLB – Rays say split-season plan with Montreal rejected by MLB
The Tampa Bay Rays’ proposed plan to split the season between Florida and Montreal has been rejected by Major League Baseball. Rays principal owner Stuart Sternberg announced the news on Thursday. The idea of playing in both the Tampa Bay area and Montreal has been discussed over the past several years after attempts to build a new full-time ballpark locally failed. The Rays lease at Tropicana Field in St. Petersburg, Florida, where the team has played since its inaugural season in 1998, expires after the 2027 season. Despite reaching the World Series in 2008 and 2020, the Rays have ranked near the bottom in attendance annually.

MILB – Robot umpires at home plate moving up to Triple-A for 2022
Robot umpires have been given a promotion and will be just one step from the major leagues this season. Major League Baseball is expanding its automated strike zone experiment to Triple-A, the highest level of the minor leagues. MLB’s website posted a hiring notice seeking seasonal employees to operate the Automated Ball and Strike system. MLB said it is recruiting employees to operate the system for the Albuquerque Isotopes, Charlotte Knights, El Paso Chihuahuas, Las Vegas Aviators, Oklahoma City Dodgers, Reno Aces, Round Rock Express, Sacramento River Cats, Salt Lake Bees, Sugar Land Skeeters and Tacoma Rainiers.

Olympics – 100%: Chief medical officer says all US Olympians vaccinated
The U.S. Olympic top doctor says all of the 200-plus athletes heading to Beijing for the Olympics next month are fully vaccinated, and not a single one asked for a medical exemption. Chief Medical Officer Jonathan Finnoff says the 21-day quarantine period that the hosts are requiring for unvaccinated participants, combined with the education the U.S. Olympic and Paralympic Committee provided, “really resonated with the athletes.” In September, the USOPC introduced a policy requiring U.S. athletes to be fully vaccinated by Dec. 1 unless they had a medical exemption. About a month later, the IOC put out guidelines calling for full vaccinations or a three-week quarantine period upon entering China.

Olympics – ESPN will not send reporters to Beijing Olympics
ESPN has joined the increasing number of media companies that will not be sending reporters to next month’s Beijing Olympics due to continued concerns about rising COVID-19 cases worldwide and China’s strict policy about those who test positive. ESPN Executive Vice President Norby Williamson says in a statement that the network had planned to send four reporters to China but they will now join a larger group covering the Olympics remotely.

Olympics – Beijing Olympics will showcase hockey’s next generation
Connor McDavid, Auston Matthews and Nathan MacKinnon will not get to play at the Olympics for the first time since the NHL is not sending players to Beijing. The men’s hockey tournament instead could be a showcase of the next generation of hockey talent. Most recent top NHL draft pick Owen Power is expected to suit up for Canada. Michigan teammate Matty Beniers is one of eight players under age 21 playing for the United States. They could follow the lead of Kirill Kaprizov, Miro Heiskanen and Troy Terry, who starred in the 2018 Olympics before reaching the NHL.