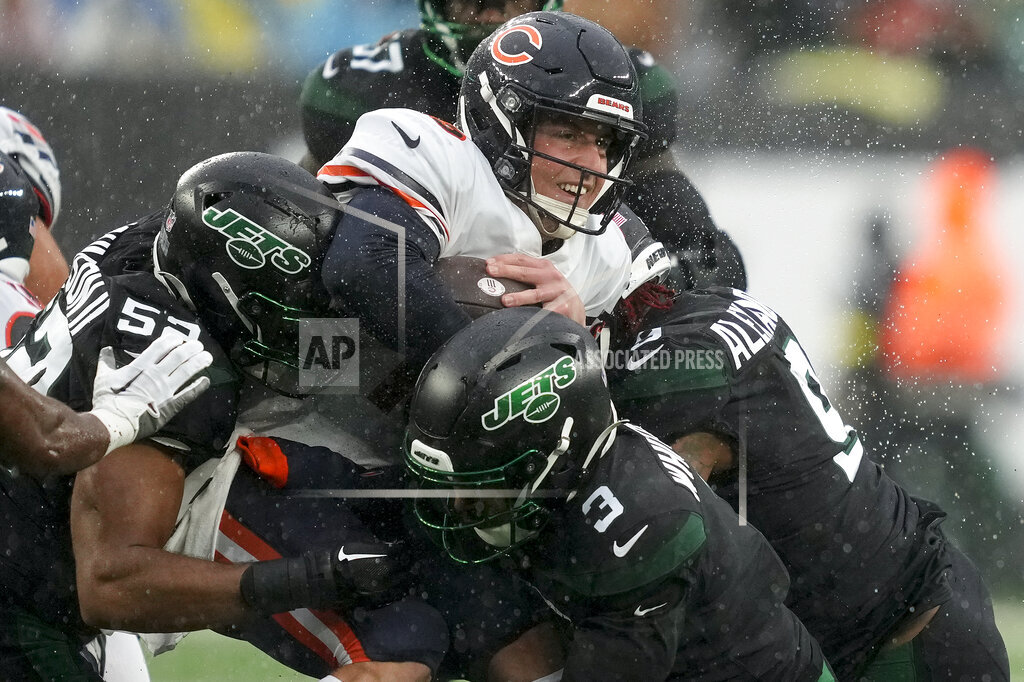 Jets 31, Bears 10 – White throws 3 TD passes to lead Jets past Bears 31-10
Mike White threw three touchdown passes including two to Garrett Wilson and the New York Jets rolled over the Chicago Bears 31-10. White started for the benched Zach Wilson and the Jets rolled up a season-high 466 yards. White was 22 of 28 for 315 yards. He’s the fifth player in NFL history to have multiple games with 300 yards passing and three TD passes within his first four career starts. Bears starting quarterback Justin Fields was ruled out 90 minutes before kickoff after being listed as questionable with an injured left shoulder. Trevor Siemian started in his place.

NFL – Skunk invades Browns stadium during victory over Bucs
A skunk was on the loose in the stands inside FirstEnergy Stadium during Cleveland’s game against the Tampa Bay Buccaneers. The critter was initially spotted going up and down steps in a section of seats near the tunnel to the Browns locker room. Fans kept their distance from the skunk, which searched the aisles and under seats for food before hiding under a step. A security guard placed a box over the animal, which wasn’t harmed and eventually worked itself free after the Browns rallied to beat the Bucs 23-17 in overtime for just their fourth win in 11 games.

Jets 7, Blackhawks 2 – Jets rout Chicago 7-2, handing Blackhawks 7th straight loss
Saku Maenalanen and Pierre-Luc Dubois each scored two goals and the Winnipeg Jets routed Chicago 7-2 on Sunday night, handing the Blackhawks their seventh straight loss. Kyle Connor connected for the third straight game and had two assists, Mark Scheifele had his team-leading 11th goal, and Jansen Harkins also scored for the Jets. They have won two straight and three of four to improve to 13-6-1. Connor Hellebuyck made 23 saves and defenseman Josh Morrissey had three assists as Winnipeg dominated with a 44-shot attack. Taylor Raddysh scored for the second straight game and Jujhar Khaira had a power-play goal for Chicago, 0-6-1 during its slide.

Cavaliers 102, Pistons 94 – Mitchell, Mobley lead Cavaliers to 102-94 win over Pistons
Donovan Mitchell scored 32 points, Evan Mobley added 20 and the Cleveland Cavaliers rallied late to beat the Detroit Pistons 102-94. Cleveland trailed for much of the game, but outscored the Pistons 29-16 in the fourth quarter. Darius Garland added 16 points for Cleveland, which has won five of six. Marvin Bagley III had 19 points for the Pistons, who were missing starters Bojan Bogdanovic (ankle), Jaden Ivey (knee), Isaiah Stewart (foot) and Cade Cunningham (shin).

Clippers 114, Pacers 100 – Zubac scores 31, pulls down 29 boards; Clippers beat Pacers
Ivica Zubac scored a season-high 31 points and pulled down a career-best 29 rebounds as the Los Angeles Clippers pulled away in the second half to beat the Indiana Pacers 114-100. It is the most rebounds in an NBA game this season. Zubac was one board away from the league’s fourth 30 point/30 rebound rebound game and first since 2018 when he fouled out with 3:40 remaining. Jalen Smith scored a career-high 23 points for the Pacers while Tyrese Haliburton added 15.

NCAAFB – Day now under the microscope as Bucks are blown out again
Welcome to Jim Harbaugh’s previous life, Ryan Day. This is the way things go at the top of college football’s food chain. If you can’t win the most important game on your schedule, there will be questions about whether you are the right man for the job. For the second straight season, Harbaugh’s Michigan team pummeled Day and Ohio State. Day is 45-5 at Ohio State as Urban Meyer’s replacement, but 1-2 against Michigan. It was just last year when Harbaugh couldn’t win the big one. Not anymore. Now he was the Wolverines on the verge of a second straight College Football Playoff.

NCAAFB – AP Top 25: Michigan up to No. 2 behind top-ranked Georgia
Michigan moved up to No. 2 in The Associated Press college football poll, with TCU at No. 3 and Southern California at No. 4 behind top-ranked Georgia after four top-10 teams lost on the final day of regular-season games. The Bulldogs are No. 1 for the eighth straight week and 11th time this season in the AP Top 25. Georgia received 58 first-place votes and Michigan received the other five. The Wolverines reached a season-high No. 2 after beating Ohio State, which dropped the Buckeyes three spots to No. 5.

NCAAFB – Big Ten – Fickell leaves Cincinnati to take over as Wisconsin’s coach
Wisconsin is bringing Cincinnati’s Luke Fickell back to the Big Ten. The Badgers have hired Fickell to take over their football program after his successful run with the Bearcats. Fickell posted a 57-18 record in six seasons at Cincinnati and helped the Bearcats earn a College Football Playoff berth last year. The former Ohio State defensive lineman went 6-7 as the Buckeyes’ interim coach in 2011. The 49-year-old Fickell takes over for interim coach and former Badgers star player Jim Leonhard. Leonhard had taken over after Paul Chryst’s Oct. 2 firing.

NCAAFB – Nebraska signs Matt Rhule to 8-year deal as football coach
Nebraska has signed Matt Rhule to an eight-year contract to be the Cornhuskers’ next football coach. The school said Rhule would be introduced at a Monday news conference and terms of the contract would be announced then. The 47-year-old Rhule has been out of work for less than two months since getting fired by the Carolina Panthers. Nebraska has had six straight losing seasons and is more than 20 years removed from its 1990s heyday. Rhule took over struggling programs at Temple and Baylor and built them into conference contenders in three years. He was 11-27 with Carolina before getting fired after a 1-4 start.

(12) Michigan State 78, Portland 77 – Tyson Walker helps No. 12 Michigan State top Portland 78-77.
Tyson Walker scored 15 points, and No. 12 Michigan State topped Portland 78-77 in the fifth-place game of the Phil Knight Invitational. The Spartans shot 52.5% from the field, and each of their starters scored in double figures. Pierre Brooks made each of his four 3-point attempts and finished with 15 points. Joey Hauser had 14 points and seven rebounds, and A.J. Hoggard added 12 points and nine assists. Tyler Robertson had 16 points, nine assists, seven rebounds and two steals for the Pilots.

(18) Oregon 86, Michigan State 78 – Rogers has 19, No. 18 Oregon women hold off Spartans 86-78
Endyia Rogers scored 19 points, including critical back-to-back 3-pointers in the fourth quarter, Phillipina Kyei had a double-double with career highs and No. 18 Oregon held off Michigan State 86-78 in the third-place game of the Phil Knight Invitational. The Ducks led 29-12 when Rogers scored the opening basket of the second quarter but the Spartans slowly came back behind Kamaria McDaniel, who had 28 points. McDaniel hit a 3-pointer and Matilda Ekh had a steal and layup and Michigan State tied the game with 7:17 to play. That’s when Rogers, who had a career-high five 3-pointers, scored from distance, the first coming after a timeout and the Ducks regained control. Kyei scored 15 points and grabbed 16 rebounds.

(22) Michigan 84, (21) Baylor 75 – Michigan women beat Baylor for Gulf Coast Showcase title
Emily Kiser scored 26 points on 10-of-13 shooting and grabbed 13 rebounds, Laila Phelia added 20 points and Michigan scored the final 11 points to beat No. 21 Baylor 84-75 in the championship game of the Gulf Coast Showcase. Maddie Nolan scored seven of her 12 points in a 20-5 run over the final 4-plus minutes for No. 22 Michigan (7-0). Jaden Owens scored 22 points on 9-of-13 shooting for the Bears and Ja’Mee Asberry added 15 points and six assists. Bella Fontleroy scored 14 points and made 4 of 8 from behind the arc. Baylor shot 55% from the field and hit 10 3s but committed 22 turnovers — six by Owens — and made 3 of 7 from the free-throw line.

NCAAWBKB – Indiana coach says Vegas tourney set back women’s basketball
Indiana women’s basketball coach Teri Moren says she considered not playing Memphis on Saturday night in the Las Vegas Invitational. No paramedics were on site to tend to an injured Auburn player in the preceding game. Auburn freshman Kharyssa Richardson fell hard to the floor with four minutes left against Colorado State and appeared to bang her head. There was a 50-minute wait for EMT personnel to arrive to The Mirage on the Las Vegas Strip. That delayed the Indiana-Memphis games by nearly 90 minutes.

Costa Rica 1, Japan 0 – Costa Rica rallies to beat Japan 1-0 in Group E of World Cup
Keysher Fuller scored in the 81st minute to lift Costa Rica to a 1-0 victory over Japan at the World Cup. The result leaves both teams with three points after two games in Group E. Fuller took advantage of a defensive error when Japan failed to clear the ball and hit the net from 18 yards with the ball going in off the fingertips of leaping Japan goalkeeper Shuichi Gonda. The match was tactical and largely lackluster and the first half did not yield a single shot on goal. The second half was slightly better with Japan pressing throughout until Costa Rica broke through.

Morocco 2, Belgium 0 – Morocco pulls off another World Cup upset, beats Belgium 2-0
Morocco pulled off another shock at the World Cup by beating Belgium 2-0 and leaving Kevin de Bruyne and the 2018 semifinalists in peril of a group-stage exit. Morocco captain Romain Saiss gave his team the lead with a barely noticeable deflection off his hip after a free kick from Abdelhamid Sabiri in the 73rd minute. Zakaria Aboukhlal then guided a shot into the roof of the net off a pass from Hakim Ziyech in stoppage time. Belgium had won its last seven group games at the World Cup. It was Morocco’s first win at a World Cup since 1998 and only its third ever.

Croatia 4, Canada 1 – Croatia downs Canada 4-1 at World Cup on Kramaric’s 2 goals
Andrej Kramaric scored a pair of goals and Croatia crushed Canada’s hopes of advancing at its first World Cup in 36 years with a 4-1 victory. Alphonso Davies scored Canada’s first-ever World Cup goal seconds into the match but the team’s trip to soccer’s biggest tournament will end on Thursday against Morocco. The Group F leaders beat Belgium 2-0 earlier in the day. Marko Livaja and Lovro Majer also scored for the 2018 World Cup runners-up.

Spain 1, Germany 1 – FT – Germany salvages 1-1 draw against Spain at World Cup
Germany forward Niclas Füllkrug salvaged a 1-1 draw against Spain at the World Cup. The Germans still need to win their last group match to have a chance of advancing to the knockout stage. The four-time champions were eliminated in the group stage four years ago in Russia. Álvaro Morata put Spain ahead in the 62nd minute and Füllkrug equalized in the 83rd. Germany will next face Costa Rica. The Costa Ricans defeated Japan 1-0 earlier in the day. Even a win may not be enough for the Germans. They are in last place in Group E and need the other result to go their way.

FIFA – US Soccer briefly scrubs emblem from Iran flag at World Cup
The U.S. Soccer Federation briefly displayed Iran’s national flag on social media without the emblem of the Islamic Republic. The federation described the move as a show of support for protesters in Iran ahead of the two nations’ World Cup match Tuesday. The federation says in a statement Sunday that it decided to forego the official flag on social media accounts to show “support for the women in Iran fighting for basic human rights.” The move comes as nationwide protests challenging Tehran’s theocratic government continue in Iran.

FIFA – Lalas: US overlooked importance to Iran of ’98 Cup match
Looking back to the United States’ infamous 1998 World Cup loss to Iran, Alexi Lalas thought the Americans failed to appreciate the emotional significance of their opponents. He says "this is a country and culture that we have a long history with — a lot of it is negative, let’s be honest.” Following draws against Wales and England, the U.S. needs a win to reach the knockout stage. The U.S. and Iran met at the 1998 tournament, 19 years after an Islamic Revolution. Iran referred to the U.S. as the “Great Satan” and Team Melli upset the Americans 2-1.