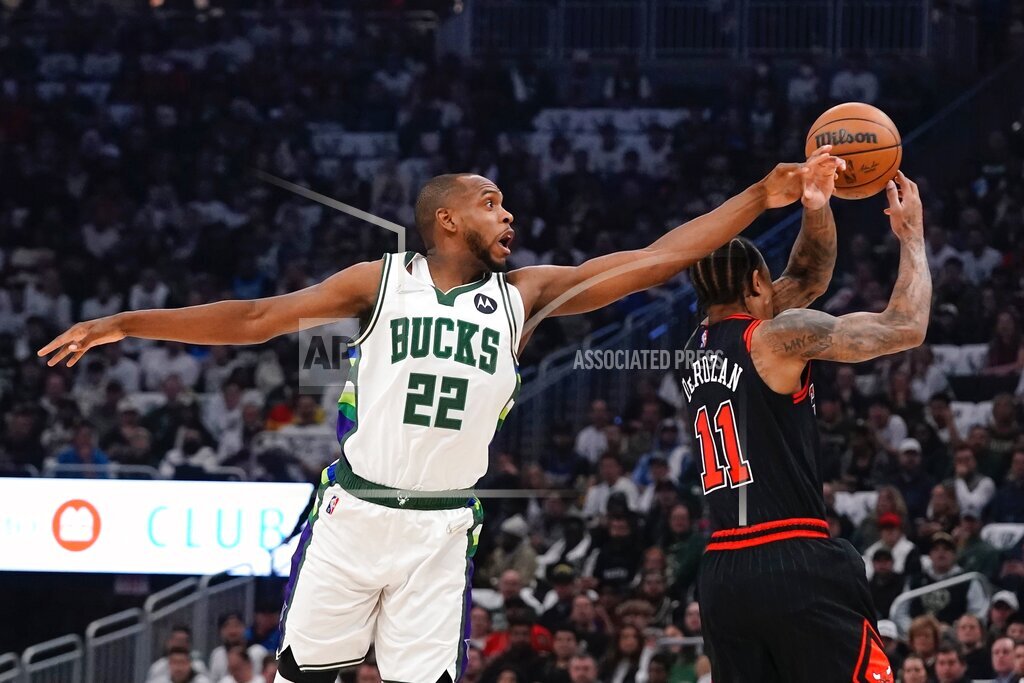 Bulls 114, Bucks 110 – DeRozan scores 41 as Bulls beat Bucks 114-110 to tie series
DeMar DeRozan scored 41 points for his career playoff high and the Chicago Bulls outlasted the Milwaukee Bucks 114-110 on Wednesday to tie their Eastern Conference first-round playoff series at a game apiece. Nikola Vucevic added 24 points plus 13 rebounds and Zach LaVine had 20 points as the Bulls beat the Bulls for just the second time in their last 18 meetings. Giannis Antetokounmpo led the Bucks with 33 points, 18 rebounds and nine assists

Yankees 5, Tigers 3 – Cabrera gets to 2,999 hits in Tigers’ 5-3 loss to Yankees
Miguel Cabrera had three hits to move one shy of 3,000 in the Detroit Tigers’ 5-3 loss to the New York Yankees at chilly Comerica Park. Cabrera beat out an infield hit in the second inning and singled up the middle oin the fourth against Luis Severino, then grounded a single through the shortstop hole in the sixth off Chad Green (1-1). The crowd, announced at 17,268, rose to its feet as soon as the Yankees made the third out of the eighth. Cabrera struck out on a 1-2 sinker from Clay Holmes.

Guardians 11-2, White Sox 1-1 – Ramírez slam, 5 RBIs as Guardians sweep White Sox 11-1, 2-1
José Ramírez hit his second grand slam of the season in an 11-1 win, then had an RBI double in a 2-1 victory as the Cleveland Guardians swept a doubleheader from the Chicago White Sox. Ramírez, who signed a seven-year, $141 million contract last week, leads the majors with 20 RBIs. The Guardians earned their initial home wins under their new name.

Rays 8, Cubs 2 – F/6 – Mejia homers, doubles: Rays rip Cubs 8-2 in shortened game
Francisco Mejia homered and drove in three runs to help the Tampa Bay Rays beat the Chicago Cubs 8-2 in a game that was called after 5 1/2 innings due to rain. First pitch was moved up 70 minutes because rain was forecast for later on a chilly evening. The game was then delayed in the middle of the sixth inning when the rain intensified. It was called about an hour later. Cubs rookie Seiya Suzuki walked in the fifth to reach base for the 12th straight game at the start of his career, breaking a team record held by two players — Art Williams in 1902 and Tony Taylor in 1958.

MLB – Cabrera needs 1 hit for 3,000
Detroit Tigers star Miguel Cabrera needs one more hit for 3,000 in his career, and will try to reach the mark at Comerica Park. Cabrera added three more hits to his total Wednesday night in a 5-3 loss to the Yankees. With fans standing and cheering while hoping to see history, he struck out in his final at-bat. Cabrera is on deck to become the 33rd major leaguer with 3,000 hits, and the first player from Venezuela to achieve the feat. The 39-year-old Cabrera gets his next chance when Yankees lefty Jordan Montgomery faces Detroit in an afternoon matchup.

Blackhawks 4, Coyotes 3 – OT – DeBrincat scores in last minute of OT, Chicago beats Arizona
Alex DeBrincat scored his 40th goal of the season with 37 seconds left in overtime, giving the Chicago Blackhawks a 4-3 victory over the Arizona Coyotes. Jake McCabe, Dominik Kubalik and Alex Vlasic also scored for the Blackhawks, who won for the second time in 12 games after squandering a 3-1 lead in the final 10:18 of regulation. Barrett Hayton, Nate Smith and Anton Stralman scored for the Coyotes, who have lost eight in a row and 15 of 17.

NHL – Red Wings Zamboni driver, a fan favorite, sues over firing
A popular Zamboni driver for the Detroit Red Wings says he was dismissed for urinating in a drain. Al Sobotka filed a discrimination lawsuit this week against Olympia Entertainment, two months after he was fired. Sobotka worked for the Red Wings for 51 years. His lawyer says the 68-year-old Sobotka has a health condition that causes him to frequently urinate. Sobotka couldn’t get to a restroom so he urinated in a drain that carries ice runoff from the Zamboni machines at Little Caesars Arena. Someone saw him and apparently reported it in February. Sobotka says he was “heartbroken” over his firing. There was no immediate comment from Olympia Entertainment.

NCAAMBKB – Wright resigns as Villanova coach, Neptune takes over
Jay Wright shocked college basketball Wednesday night with his immediate resignation at Villanova, the Big East program he led to two national championships and four Final Fours in a Hall of Fame career. The 60-year-old Wright guided Villanova to titles in 2016 and 2018 and just led the Wildcats to the Final Four, where they lost to national champion Kansas. He went 520-197 in 21 seasons at the school and 642-282 overall, also coaching Hofstra from 1994–2001. Kyle Neptune, who served on the Villanova coaching staff before accepting the head coaching position at Fordham in 2021, returned to replace Wright. Wright will remain at Villanova and stay involved in fundraising, advising, education and more.

WNBA – 2 months after Griner’s arrest, mystery surrounds her case
WNBA All-Star and two-time Olympic gold medalist Brittney Griner is easily the most prominent American citizen known to be jailed by a foreign government. Yet as a crucial hearing approaches next month in Russia, the case against Griner remains shrouded in mystery. Little clarity has come from Russian prosecutors since she was detained in February. Only measured public statements have come from the U.S. government as it seeks more information about the circumstances of her detention. An otherwise mundane drug case features storylines of race and gender, professional athletics, geopolitics and international criminal justice.

Tennis – Wimbledon bans players from Russia, Belarus over Ukraine war
Russian and Belarusian tennis players have been banned from competing at this year’s Wimbledon tournament because of the war in Ukraine. The All England Club’s move makes the grass-court Grand Slam tournament in southwest London the first top-level tennis event to bar players from Russia and Belarus. Among those affected are second-ranked Daniil Medvedev. He won last year’s U.S. Open and was this year’s Australian Open runner-up. He was briefly ranked No. 1 in the world this year. Another player affected is Victoria Azarenka of Belarus. Azarenka is a two-time Australian Open champion and also a former No. 1.

NFL – Haskins apparently ran out of gas before being fatally hit
Pittsburgh Steelers quarterback Dwayne Haskins apparently ran out of gas and was returning to his vehicle when he was fatally struck by a dump truck earlier this month in Florida. The Florida Highway Patrol released a recording Wednesday of a 911 call Haskins’ wife Kalabrya (Gondrezick) made to the agency shortly after the April 9 accident. Calling from Pittsburgh and unaware of the accident, she told the dispatcher that Haskins had called her to say he had run out of gas and would call her back. When the former Ohio State star didn’t and she couldn’t reach him, she called 911. The accident report released Wednesday says witnesses told investigators Haskins was trying to cross the highway when he went into the path of the dump truck. The truck knocked him into the path of a car, which also struck him.