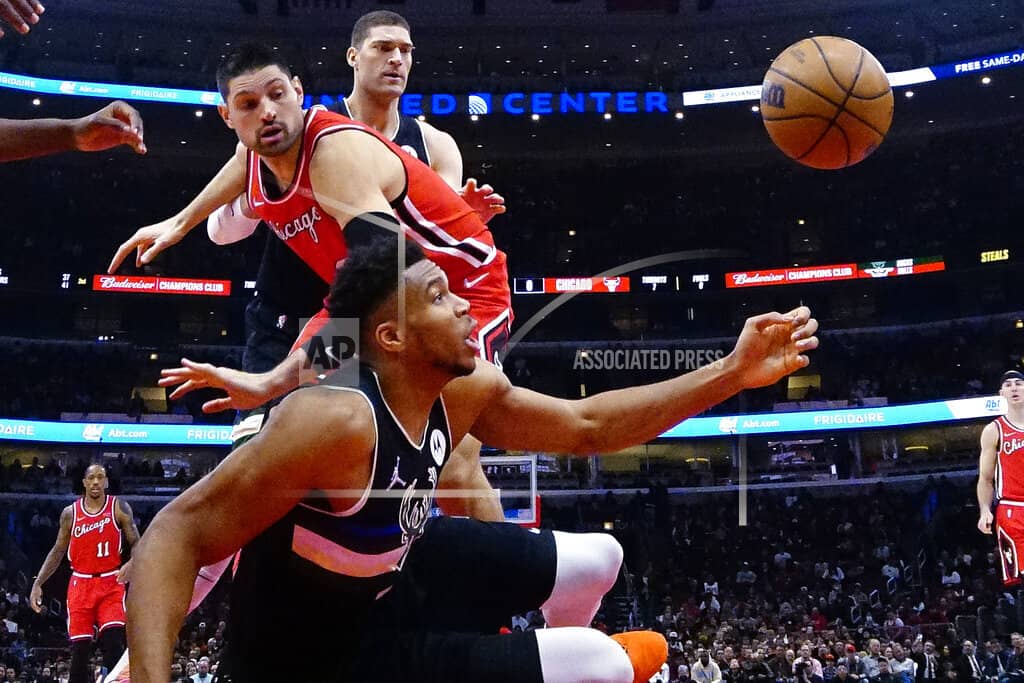 Bucks 127, Bulls 106 – Lopez scores 28, Bucks beat Bulls 127-106 to clinch Central
Brook Lopez scored a season-high 28 points and the Milwaukee Bucks overcame a rather quiet performance from Giannis Antetokounmpo to clinch their fourth straight Central Division championship with a 127-106 victory over the Chicago Bulls. The Bucks haven’t been on a run like this since Don Nelson’s teams won seven consecutive division titles in the 1980s. They took control early and came away with an easy win even though DeMar DeRozan scored 40 for Chicago. Antetokounmpo, trying to overtake LeBron James and Joel Embiid in a tight race for his first scoring title, finished with 18 points, nine rebounds and seven assists. But the two-time MVP started slow and spent most of the fourth quarter on the bench after picking up his fifth foul. Khris Middleton scored 19.

Sixers 131, Pacers 122 – Embiid scores 45, 76ers beat Pacers to pull even in Atlantic
Joel Embiid had 45 points and 13 rebounds, and the Philadelphia 76ers made a franchise-record 17 3-pointers in the first half of a 131-122 victory over the Indiana Pacers that moved them into a tie with Boston atop the Atlantic Division.  Embiid banked in a 3-pointer at the halftime buzzer and shot 18 for 30 overall while moving into the NBA scoring lead with 30.4 points per game. He had 27 points and seven rebounds in the first half, helping Philadelphia take control with a 49-point second quarter that led to an 82-59 halftime lead. Buddy Hield scored 25 points for Indiana.

NBA – Bulls’ Ball suffers setback in recovery from knee surgery
Chicago Bulls point guard Lonzo Ball experienced another setback in his recovery from surgery for a torn meniscus in his left knee, raising more doubt about whether he will play again this season. Coach Billy Donovan says Ball felt some discomfort after he tried to ramp up activities again following a 10-day pause. Donovan says the next step will probably be a “meeting of the minds” in the next day or two. And the possibility of Ball missing the remainder of the season is “on the table.” Ball has not played since Jan. 14.

NBA – Gene Shue, All-Star player and Coach of the Year, dies at 90
Gene Shue, a two-time NBA Coach of the Year who won 784 games with the Bullets, 76ers and Clippers, has died. A five-time All-Star as a player for the Pistons, Shue went on to coach for more than two decades. He took the Baltimore Bullets to the NBA Finals in 1971, then did the same with the Philadelphia 76ers in 1977. He is still the record holder for the Washington-Baltimore franchise with 522 victories. The Wizards and the NBA announced Shue’s death Monday. He was 90.

Red Wings 5, Bruins 3 – Wings end 6-game skid, Nedeljkovic has 47 saves vs. Bruins
Jakub Vrána had a goal and an assist, Alex Nedeljkovic made a season-high 47 saves and had an assist, and the Detroit Red Wings defeated the Boston Bruins 5-3. The victory snapped a six-game losing streak for Detroit and halted Boston’s three-game win streak. Dylan Larkin, Michael Rasmussen, Filip Zadina and Sam Gagner also scored for Detroit. The Bruins got goals from Erik Haula, Brandon Carlo and Patrice Bergeron, and Jeremy Swayman made 24 saves.

MLB – Newly acquired Meadows expected to be set for Tigers’ opener
Newly acquired Detroit Tigers outfielder Austin Meadows is expected to be ready for opening day Friday against the Chicago White Sox after recently being slowed by an oblique injury. Meadows was set to play in a simulated game Wednesday. The 26-year-old Meadows had a career-high 106 RBIs last season. He was acquired from the Tampa Bay Rays on Monday night for infielder Isaac Paredes and a draft pick. Meadows’ younger brother, Parker, was selected by Detroit in the second round of the 2018 draft. He played for Class A Lakeland and Class A West Michigan last year. The Tigers open at Comerica Park, ready to show off a roster boosted by offseason trades and free-agent signings.

MLB – Sign of times: MLB gives OK to electronic pitch calling
In a move that will end a tradition dating 150 years, Major League Baseball has approved the use of an electronic device for catchers to signal pitches in an effort to eliminate sign stealing and speed games. Since the beginning of baseball in the 19th century, catchers had used their fingers to signal the type of pitch and its intended location. As video at balllparks increased, so did sign stealing and the worries about how teams were trying to do it. The Astros were penalized for using a camera and banging a trash can to alert their batters to pitches during their run to the 2017 World Series title.

Golf – Masters – Tiger Woods plans to play the Masters and thinks he can win
Tiger Woods is planning to play in the Masters and he thinks he can win. It will be 508 days since Woods last walked and competed when he tees it up Thursday. And it will be nearly 14 months since he badly damaged his right leg is a car crash in suburban Los Angeles. Woods says he doesn’t play if doesn’t think he can win. That hasn’t changed. His biggest concern is how his body will hold up over four straight days of playing 18 holes. When asked if thinks he can win, Woods replied, “I do.”

NCAAFB – Notre Dame makes historic football game vs Tennessee State
Notre Dame will host Tennessee State in September 2023, marking the first time the Fighting Irish have ever faced a Historically Black College or University on the football field. School officials made the announcement Tuesday. The historic contest will be broadcast nationally by NBC. Notre Dame credited Tennessee State coach Eddie George, the 1995 Heisman Trophy winner, and athletic director Mikki Allen for creating a vision that would make the game possible. The Tigers have won more than 550 games since the program’s inception and have claimed 12 Black College national titles.

NCAAMBKB – Kansas’ victory most-viewed men’s title game on cable TV
Kansas’ comeback victory over North Carolina to win the NCAA men’s basketball championship was the most-viewed title game on cable television. The Jayhawks’ 72-69 win averaged 18.1 million viewers on TBS, TNT and truTV. That’s a 4 percent increase over last year’s title game between Baylor and Gonzaga on CBS. This was the third time the championship game was on Turner, but first since 2018. They were supposed to have the 2020 final, but the tournament was cancelled due to the coronavirus pandemic. The entire tournament on CBS and Turner averaged 10.7 million, a 13% increase over last year.

Golf – Masters – Masters is all about Tiger Woods, even with so many subplots
This Masters is all about Tiger Woods to start the week. That’s been the case ever since he won his first green jacket 25 years ago. But it’s even greater now. His right leg was severely injured in a car crash just over 13 months ago. And now he might be playing the hilly terrain of Augusta National. Other players are overshadowed by the question of whether Woods will actually tee it up this week. There’s Rory McIlroy going after the career Grand Slam again. Not to be forgotten is Bryson DeChambeau and his peculiar set of injuries.

Russia/Ukraine – Russian appeals against sports bans to be heard by CAS
Russian federations and athletes have filed multiple legal challenges to fight their isolation from world sports because of their country waging war on Ukraine. The Court of Arbitration for Sport says Russian officials have filed appeals against governing bodies in soccer, figure skating and speed skating, gymnastics, rowing, rugby and biathlon. Russian Olympic officials have also challenged the European OIympic Committee’s exclusion of teams and athletes from its youth multi-sport events. The headline case saw FIFA remove Russia from qualifying games last month for the men’s World Cup.