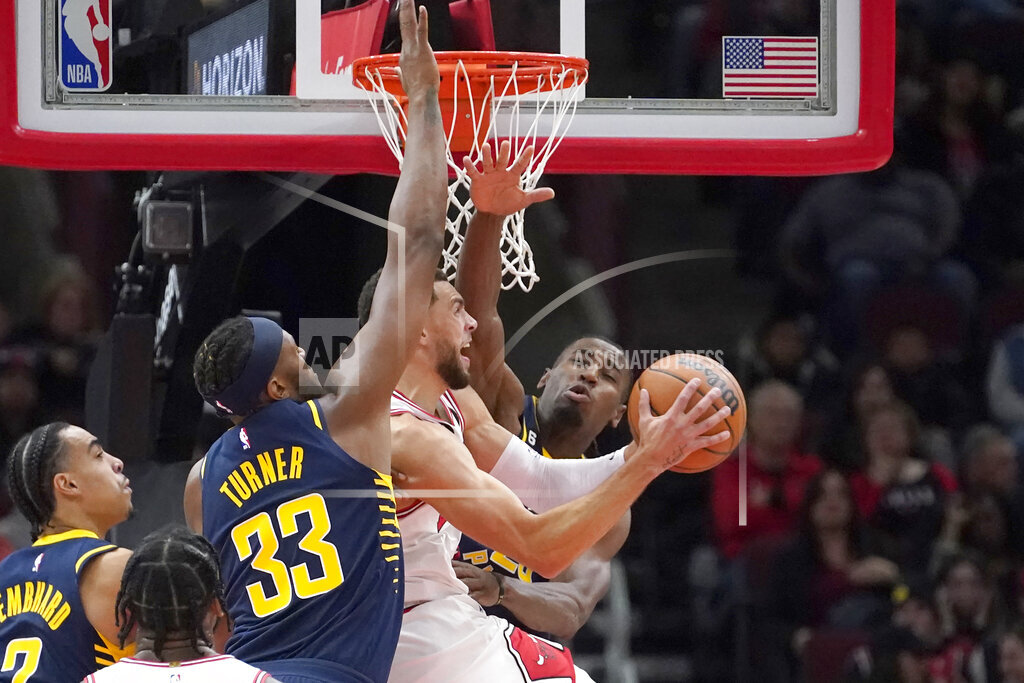 Bulls 124, Pacers 109 – LaVine’s 28 points enable Bulls to hold off Pacers, 124-109
Zach LaVine scored 28 points as the Chicago Bulls held off a third-quarter surge to earn a 124-109 victory over the Indiana Pacers. Bulls forward DeMar DeRozan scored 17 points to move within seven points of becoming the 50th player in NBA history to reach the 20,000-point mark. The Pacers rallied from a 24-point deficit behind Buddy Hield’s 24 points, including three 3-pointers late in the third quarter that trimmed the Bulls’ lead to four. Bulls forward Patrick Williams added a season-high 10 points, and reserve guard Goran Dragic provided a spark with 13 points and five assists. Pacers center Myles Turner made his season debut after an ankle injury and grabbed six rebounds.

NHL – Canadiens get D Beaudin from Blackhawks for C Hills
The Montreal Canadiens have acquired defenseman Nicolas Beaudin from the Chicago Blackhawks in exchange for center Cam Hillis. Beaudin had two goals and four assists in 22 games over three seasons for Chicago. The Quebec native was the 27th overall pick in the 2018 draft. Hills, the 66th pick in 2018, made his NHL debut with Montreal last season.

NFL – Eagles acquire 3-time Pro Bowl DE Quinn from Bears
The undefeated Philadelphia Eagles have acquired three-time Pro Bowl defensive end Robert Quinn from the Chicago Bears. Chicago gets a fourth-round pick in 2023 in return. The 32-year-old Quinn is off to a slow start with just one sack and three quarterback hits. But he broke Hall of Famer Richard Dent’s franchise record with 18 1/2 sacks last year in a resurgent season. The Eagles are the lone remaining undefeated team.

NFL – Lions owner says she is still confident in team’s leadership
Detroit Lions owner Sheila Ford Hamp spoke to reporters to share her frustration with the team’s 1-5 record and express confidence in the franchise’s leadership. Hamp says she doesn’t want everyone to push the panic button. Hamp fired general manager Bob Quinn and coach Matt Patricia nearly two years ago during her first season in charge. After going through a search to hire general manager Brad Holmes and coach Dan Campbell, she doesn’t sound eager to make a move to get rid of either or both.

NFL – Ryan surprised, hopeful after getting benched by Colts
The disappointment was etched all over Matt Ryan’s face. Two days after learning he had been benched by Indianapolis Colts coach Frank Reich, Ryan told reporters he was surprised and shocked. Second-year quarterback Sam Ehligner will replace the 15-year veteran as the starter Sunday against Washington. And Reich says Ehlinger will likely keep the No. 1 job for the rest of the season.

MLB – World Series ump crew youngest in years, nod to K-zone tech
The seven-man umpire crew working this World Series is easily the youngest in recent memory. It reflects the impact of computerized strike zones, plus other factors including injuries, retirements and postseason rotations. At an average age of 45.7 years old, the crew calling the Philadelphia Phillies-Houston Astros matchup is more than five years younger than the average of World Series crews over the past decade, The Associated Press tallied. So young, in fact, there won’t be a full-time regular-season crew chief on the field in Game 2 on Saturday night. Usually, two or sometimes three veteran chiefs are on the Fall Classic crew. The Series starts Friday night in Houston.

NCAAFB – Irish need improved red-zone defense as ranked foes loom
Notre Dame’s defense has been its strength this season. But the Fighting Irish have been poor once opponents have gotten inside the red zone. Coach Marcus Freeman and defensive coordinator Al Golden says that needs to improve when the Irish face No. 16 Syracuse and No. 5 Clemson in back-to-back weeks. Irish opponents have scored on every trip inside the red zone this season, including touchdowns 82.4% of the time. That ranks 130th out of 131 FBS teams.

NCAAFB – SEC takes strong stance against storming the field
The Southeastern Conference wants tremendous competition. It also wants teams from both schools to have a safe experience after playing in perhaps the most frenzied arenas in college football. Wild celebrations after No. 3 Tennessee’s landmark home win over No. 6 Alabama and No. 18 LSU’s victory over 15th-ranked Mississippi turned into hefty fines for both winning schools for violating the SEC’s Access to Competition Area. Tennessee was fined $100,000 and LSU was docked $250,000. The SEC has an increasing scale on fines with violations with additional violations triggering bigger penalties.

NCAA – NCAA approves new guidance on player endorsement deals
The NCAA’s Division I Board of Directors approved new guidance to members on name, image and likeness activities, clarifying how schools, coaches and staffers can be involved athletes’ endorsement and sponsorship deals. The latest clarifications to the NCAA’s interim NIL policy create no new rules. They are intended to give athletic departments a better idea of what types of support fall outside existing bylaws. The guidance said school personnel, including coaches, can be part of fundraising for collectives, which are booster-funded organizations that provide opportunities for athletes to profit from their names, images and likenesses. But coaches and school staff members cannot donate directly to collectives.