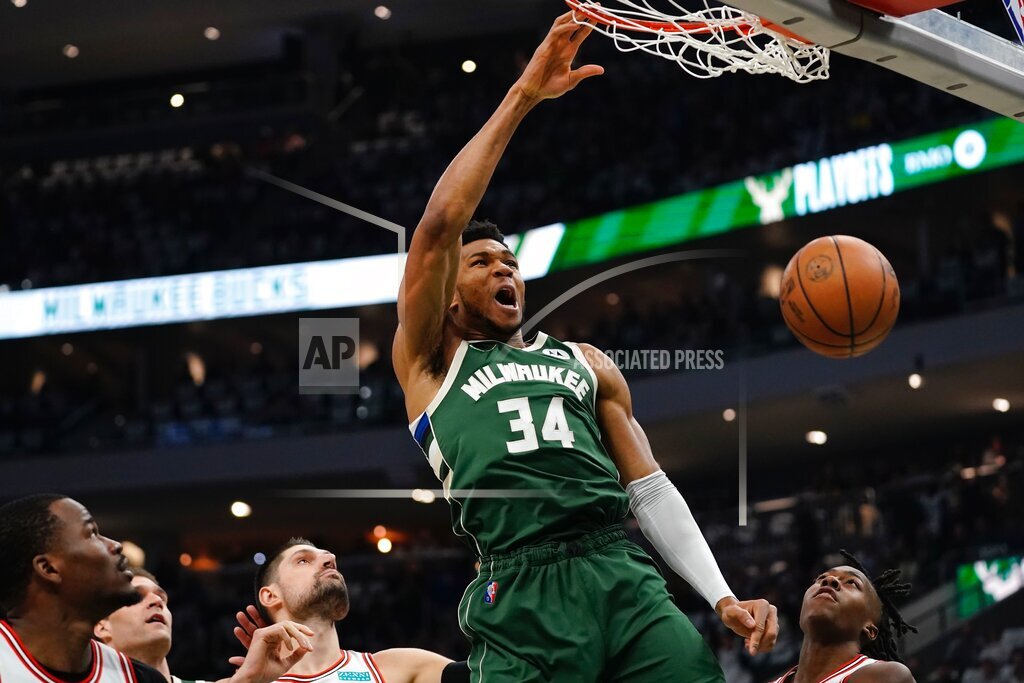 Bucks 116, Bulls 100 – Bucks rout Bulls 116-100 in Game 5, advance to face Celtics
Giannis Antetokounmpo had 33 points and nine rebounds and the defending NBA champion Milwaukee Bucks routed the Chicago Bulls 116-100 on Wednesday night to finish off the first-round series in five games. The third-seeded Bucks advanced to face second-seeded Boston in the Eastern Conference semifinals, with Game 1 on Sunday in Boston. The Celtics swept Brooklyn. After splitting the first two games, the Bucks won the last three by an average margin of 23.3 points. They won those three games without Khris Middleton, the All-Star who sprained the medial collateral ligament in his left knee during the fourth quarter of Game 2. Patrick Williams scored 23 points for Chicago.

Twins 5, Tigers 0 – Ryan’s arm, Kepler’s bat lead Twins past Tigers 5-0
Joe Ryan threw seven innings of one-hit ball and Max Kepler stayed hot with a pair of home runs as the streaking Minnesota Twins defeated the Detroit Tigers 5-0. Ryan Jeffers homered, doubled and drove in three runs for the Twins, who won their sixth game in a row. Michael Pineda took the loss for Detroit. He gave up four runs, including all three Twins homers, in five innings against his former team. Ryan was dominant from the start, holding the Tigers hitless until Miguel Cabrera laced a single in the fourth. The right-hander walked just one batter and struck out nine, two shy of his career high. He extended his scoreless streak to 17 2/3 innings and lowered his ERA to 1.17.

White Sox 7, Royals 3 – Vaughn homers as White Sox stop slide by topping Royals 7-3
Andrew Vaughn hit a tiebreaking three-run homer in the seventh inning, and the Chicago White Sox stopped an eight-game slide with a 7-3 victory over the Kansas City Royals. The winning rally for the White Sox started when Danny Mendick and Tim Anderson hit consecutive two-out singles off Collin Snider. Scott Barlow then came in, and Vaughn drove his first pitch into the home bullpen in left. The White Sox added another run in the eighth when Leury García scampered home on Reese McGuire’s double-play grounder.

Cubs 6, Braves 3 – F/10 – Contreras, Wisdom come through in 10th, Cubs beat Braves 6-3
Willson Contreras gave Chicago the lead with a run-scoring double in the 10th inning, Patrick Wisdom followed with a two-run homer, and the Cubs beat the Atlanta Braves 6-3. Contreras lined his double to the left field wall off Tyler Matzek to drive in automatic runner Ian Happ. After Frank Schwindel struck out, Wisdom launched a drive into the left-center seats for his third homer of the season. The Cubs recovered after right-hander Mychal Givens blew a 3-1 lead in the eighth. Dansby Swanson tied the game with a two-out, two-run single to right. David Robertson relieved Givens and got the win.

Blackhawks 4, Golden Knights 3 – SO – Johnson scores in SO, Blackhawks beat Golden Knights 4-3
Tyler Johnson scored in the seventh round of the shootout, and the Chicago Blackhawks beat Vegas 4-3, eliminating the Golden Knights from the playoff race. Johnson scored on a wrist shot seconds before Dallas, which needed a point to eliminate Vegas regardless, went into overtime at home against Arizona. Johnson’s goal was the only one in 14 attempts in the tiebreaker. Taylor Raddysh had two goals and Caleb Jones also scored for the Blackhawks, who won their second straight. Kevin Lankinen stopped 37 shots. Michael Amadio, Alec Martinez and Max Pacioretty scored for Vegas, and Chandler Stephenson had three assists. Logan Thompson also had 37 saves.

2022 NFL Draft Round 1
1. Jacksonville
2. Detroit
3. Houston
4. NY Jets
5. NY Giants
6. Carolina
7. NY Giants (from CHI)
8. Atlanta
9. Seattle (from DEN)
10. NY Jets (from SEA)
11. Washington
12. Minnesota
13. Houston (from CLE)
14. Baltimore
15. Philadelphia (from MIA)
16. New Orleans (from IND via PHI)
17. LA Chargers
18. Philadelphia (from NO)
19. New Orleans (from PHI)
20. Pittsburgh
21. New England
22. Green Bay (from LV)
23. Arizona
24. Dallas
25. Buffalo
26. Tennessee
27. Tampa Bay
28. Green Bay
29. Kansas City (from SF via MIA)
30. Kansas City
31. Cincinnati
32. Detroit (from LAR)
NFL Draft – Top of NFL draft could lack skill position players
This year’s NFL draft has the chance to be unlike any other in recent years with a possible long wait before any of the players who throw, catch or run with the ball coming off the board. There has never been a draft that didn’t have a quarterback, receiver, running back or tight end taken in the top 10 picks in the history of the NFL. A player from those positions going in the top five in all but one of the past 24 drafts. That could change this year with few projections showing skill position players going in the first handful of picks.

NFL Draft – Amid uncertainty, prospects display confidence
Very little is certain heading into an NFL draft. Not that the prospects on hand seem to care. There’s a level of confidence that, for them, Thursday night’s first round is a sure thing. All of the 20 men on hand for a Play 60 event Wednesday with local youths and Commissioner Roger Goodell believe they have shown the goods to be a high first-rounder. Even the very first pick, which for the second straight year Jacksonville owns. Most likely that will be Aidan Hutchinson of Michigan or Travon Walker of Georgia, both elite pass rushers.

CFL – CFL moving hashmarks closer to center of field
The Canadian Football League is moving its hashmarks closer to the center of the field and will allow teams to take the ball at the 40-yard line instead of the 35 following a field goal or single under a series of rules changes recently approved by the board of governors. The hashmarks will be 9 yards yards apart instead of the previous 17. Kicks following a safety will be from the 20 instead of the 25. CFL training camps are scheduled to open May 15. Teams will play two exhibition games _ for the first time since 2019 _ and a full 18-game regular campaign opens June 9 with the Montreal Alouettes visiting the Calgary Stampeders.

Horse Racing – Hearing officer recommends 2-year NYRA ban for Bob Baffert
A retired New York State Supreme Court Justice has recommended a two-year suspension for trainer Bob Baffert for repeated medication violations after a New York Racing Association hearing. Hearing officer O. Peter Sherwood revealed his recommendation in a 50-page report released Wednesday. Baffert’s camp and NYRA have two weeks to offer rebuttals before a three-person panel makes a final decision on the Triple Crown-winning trainer’s status. A suspension in New York until July 2024 would be the result if the panel takes up Sherwood’s full recommendation. Churchill Downs has banned Baffert from entering horses in the Kentucky Derby this year and next.

NCAA – As college sports evolve, what will be NCAA president’s job?
The NCAA is looking for a new president. Mark Emmert will step down from the job no later than June 2023. Observers say the NCAA should first decide what they want the function of the NCAA to be. The organization is making sweeping changes and handing more power to conferences and schools. Finding someone to lead amid all that turmoil is a challenge. Still, some involved in college sports still believe it will be necessary to have leadership at the top with a comprehensive vision for an organization that still emphasizes the importance of education.

CHL – Russian, Belarusian players ineligible for draft
The Canadian Hockey League said Wednesday that Russian and Belarusian players will be ineligible for selection in its July 1 import draft because of the war in Ukraine. The CHL is the umbrella organization for the three major junior hockey leagues — the Western Hockey League, Ontario Hockey League and Quebec Major Junior Hockey League. The ban does not include players currently on CHL protected lists. Last June at the most recent import draft, 16 players from Russia and 11 from Belarus were selected. Russian and Belarusian teams have been banned by the International Ice Hockey Federation from all events at all levels.

WNBA – Will a Russian prisoner exchange impact Griner?
Brittney Griner remains detained in Russia and it’s unclear how an unexpected prisoner exchange between the United States and Russia that freed marine veteran Trevor Reed will affect the status of the WNBA star. Griner has been detained in Russia since mid-February. The deal announced by both countries involving Reed, an American imprisoned for nearly three years, would have been a notable diplomatic maneuver even in times of peace. It was all the more surprising because it was done as Russia’s war with Ukraine has driven relations with the U.S. to their lowest point in decades. Griner is a two-time Olympic gold medalist who was arrested in Russia for allegedly possessing a cannabis derivative legal in much of the world. The offense can mean up to 10 years in prison.