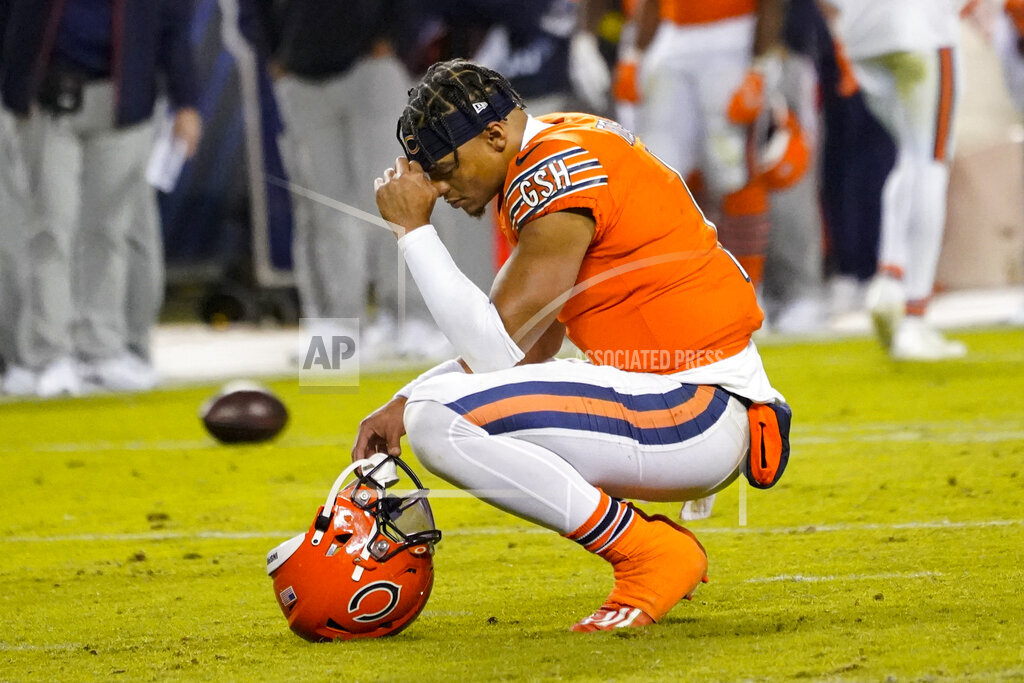 Commanders 12, Bears 7 – Muffed punt, Robinson TD lift Commanders over Bears 12-7
Christian Holmes recovered a muffed punt by Velus Jones deep in Chicago territory to set up a 1-yard touchdown run by Brian Robinson midway through the fourth quarter, and the Washington Commanders stopped a four-game losing streak, hanging on to beat the Chicago Bears 12-7. The Commanders did just enough to come away with their first win since beating Jacksonville in the opener and handed the Bears (2-4) their third straight loss. Washington caught a huge break when it punted on fourth down at its 36. Jones had trouble tracking the ball, then let it hit off his arms. Holmes recovered it in a big pile at the 6, and Robinson scored two plays later.  Chicago came up empty on three drives inside the Washington 10 during an ugly 12-7 loss. Led by Fields and Khalil Herbert, the Bears rushed for 238 yards and outgained the Commanders 392-214 overall. But Chicago still dropped its third straight game. Two more turnovers were costly for the Bears.

Golden Knights 1, Blackhawks 0 – Paul Cotter scores, Golden Knights beat Blackhawks 1-0
Paul Cotter scored and Logan Thompson stopped 27 shots as the Vegas Golden Knights beat the Chicago Blackhawks 1-0. The victory marked the fourth time in Vegas’ first six seasons in the NHL it opened 2-0-0, while Chicago (0-2-0) has now lost its first two games in four straight seasons. Thompson, making just his 22nd NHL appearance, got his second career shutout. It was his third time facing the Blackhawks and he improved to 2-0-1 against them. Alex Stalock was excellent in net for Chicago, finishing with 36 saves in his first start of the season.

Astros 4, Mariners 2 – Alvarez homers again, Astros top Mariners 4-2, lead ALDS 2-0
Yordan Alvarez and his mighty bat did it yet again, launching a go-ahead, two-run homer in the sixth inning off Seattle ace Luis Castillo that lifted the Houston Astros over the Mariners 4-2 for a 2-0 lead in the AL Division Series. Alvarez was the Game 1 hero with his gut-punch, three-run shot off reigning AL Cy Young winner Robbie Ray with two outs in the ninth inning that gave the Astros an 8-7 win. This time, Alvarez sent a drive into the short porch in left field to put the Astros on top 3-2. Game 3 in the best-of-five matchup will be Saturday in Seattle.

Guardians at Yankees – PPD, Rain – Guardians-Yankees ALDS Game 2 rained out, makeup Friday
The second game of the American League Division Series between the Cleveland Guardians and New York Yankees has been postponed because of steady rain in the forecast. It was rescheduled for Friday afternoon. New York won Tuesday’s opener of the best-of-five series 4-1. The rainout followed an unusual scheduled off day between Games 1 and 2. The teams could end up playing four days in a row. Game 3 and a potential Game 4 are scheduled in Cleveland this weekend. If Game 5 is needed, it would be held at Yankee Stadium on Monday night.

Grizzlies 126, Pistons 111 – Morant nets 31, leads Grizzlies to win in preseason finale
Ja Morant had 31 points and eight rebounds as the Memphis Grizzlies closed out their preseason with a 126-111 victory over the Detroit Pistons. Desmond Bane went 1 for 7 from 3-point range and finished with 16 points for Memphis. Brandon Clarke also scored 16 points while playing extended minutes after starting center Stephen Adams left with a sore neck. Saddiq Bey led the Pistons with 17 points and eight rebounds. Isaiah Stewart had 16 points and nine rebounds, and Cade Cunningham had 15 points and six assists. Kevin Knox II finished with 13 points as Detroit went winless in four preseason games.

NCAAFB – No. 5 Michigan, No. 10 Penn St meet with Big Ten, CFP stakes
No. 5 Michigan hosts No. 10 Penn State with Big Ten championship race and College Football Playoff stakes. The winner Saturday at the Big House will be in a position to compete for championships and the loser will need some help to reach its goals. How Michigan running back Blake Corum fares against Penn State’s run defense may prove to be pivotal. Corum has run for 500 yards and four TDs over three Big Ten games. The Nittany Lions are giving up just 79.6 yards rushing per game, ranking fifth in the country.

NCAAFB – Struggling Michigan State desperate for win vs. Wisconsin
Wisconsin’s interim coach Jim Leonhard will be going for his second straight win following the firing of Paul Chryst. The Badgers, who had lost two straight, were solid on offense and defense in a 42-7 rout of Northwestern. It was Wisconsin’s first road win against the Wildcats since 2016. Michigan State is looking to snap a four-game losing streak after losing 49-20 to No. 3 Ohio State. It is the longest winless streak for MSU since 2019 when they lost five straight games.

Golf – LIV/PGA – Mickelson says LIV on rise and PGA Tour trending downward
Phil Mickelson is back in Saudi Arabia for the first time since his disparaging remarks about the Saudis were published. And he’s doubling down on his support of Saudi-funded LIV Golf and his criticism of the PGA Tour. Mickelson says he’s glad he’s on the winning side of the divide in golf. He says LIV Golf with its 48-man fields is trending. And he says the PGA Tour is on a downward trend. Mickelson also says he never had an interview with Alan Shipnuck. He had said in February his comments to Shipnuck about the Saudis were off the record.

NCAAMBB – Bates reinstated at Eastern Michigan after charges dropped
Emoni Bates has been reinstated to the Eastern Michigan basketball team and as a student after prosecutors agreed to drop felony charges against him. The 18-year-old Bates was a top prospect out of high school who transferred to Eastern Michigan in August after playing his freshman season at Memphis. He was charged after police found a gun in a car he was driving last month. Defense attorney Steve Haney said the vehicle and the gun didn’t belong to Bates. The school says Bates was “immediately reinstated to all athletic and campus activities” because of the agreement between prosecutors and his attorneys.

Division 4 at Hartford (first round at local sites)
Bangor 6, Saugatuck 1