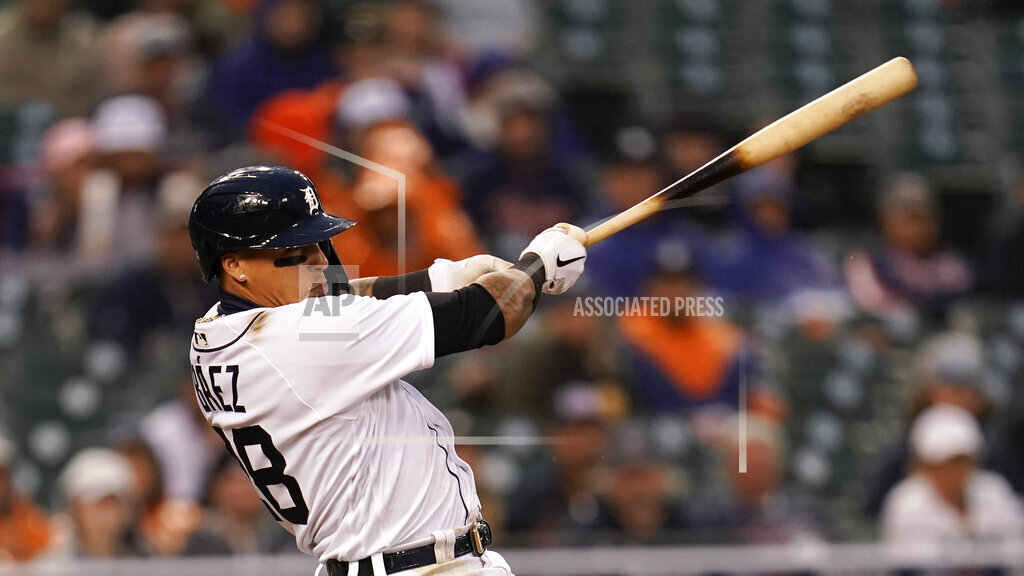 Tigers 3, Red Sox 1 – Baez’s 2-run HR in 8th lifts Tigers to 3-1 win over Red Sox
Javier Báez hit a tiebreaking two-run homer in the eighth inning and the Detroit Tigers held on to beat the Boston Red Sox 3-1. Baez sent a 396-foot shot to left off Ryan Brasier that scored Austin Meadows. Michael Fulmer pitched the eighth and Gregory Soto closed the game for Detroit’s first save of the season. Austin Davis took the loss after giving up one run and two hits in one inning.

MLB – Cubs RHP Thompson suspended by MLB for hitting McCutchen
Chicago Cubs reliever Keegan Thompson has been suspended for three games for hitting Milwaukee Brewers outfielder Andrew McCutchen with a pitch. Cubs manager David Ross was suspended for one game by Major League Baseball. Thompson and Ross also were fined an undisclosed amount. Ross will serve his suspension Tuesday at Pittsburgh. If Thompson doesn’t appeal the punishment, he will begin his suspension as well with the series opener against the Pirates.

NBA – Cunningham gives Pistons a building block in rebuilding plan
Detroit Pistons point guard Cade Cunningham was one of the only players on the court more than an hour before a recent game, breaking a sweat as if he was trying to keep his job even though his future in Detroit is secure as the No. 1 pick from the 2021 draft. The leading candidate to win NBA Rookie of the Year knows he has a lot of work to do. The Pistons also have a lot of improving to do after winning just 23 games.

NBA – Pacers start long offseason looking to overhaul roster
When Indiana Pacers president of basketball operations Kevin Pritchard made three midseason trades, it was clear he intended to rebuild. Now, he can begin in earnest. And not much is off limits. After watching the Pacers post their lowest single-season victory total since 1984-85, Pritchard and his front office colleagues will embark on the franchise’s biggest offseason overhaul in months. Indiana remains hopeful it will have three selections in the top 35 picks of June’s NBA draft and can make a play to add some additional pieces in free agency.

NBA – Lakers fire title-winning coach Frank Vogel after 3 seasons
The Los Angeles Lakers have fired Frank Vogel. The championship-winning head coach is the first member of the organization to take the fall for one of the most disappointing seasons in NBA history. Vogel was fired exactly 18 months after he led the Lakers to the franchise’s 17th title in his first season in charge. Almost nothing went right in the ensuing two seasons for the rosters assembled by general manager Rob Pelinka and coached by Vogel. The former Orlando and Indiana coach went 126-98 in his three seasons running the Lakers. Los Angeles finished 33-49 this year and missed the playoffs.

WNBA – Support for Griner at WNBA draft as Howard goes to Atlanta
Moments before Rhyne Howard went to Atlanta with the No. 1 pick in the WNBA draft, Commissioner Cathy Engelbert said the league is working very hard to help bring Brittney Griner back to the United States.  Griner, one of the league’s biggest stars, has been detained in Russia since arriving at a Moscow airport in mid-February.  Russian authorities said a search of her luggage revealed vape cartridges that allegedly contained oil derived from cannabis, which could carry a maximum penalty of 10 years in prison.  In other Draft news, Michigan Stat’s Nia Clouden went to the Connecticut Sun with the 12th pick, Michigan’s Naz Hillmon went to Atlanta with the 15th pick, Notre Dame’s Maya Dodson was the 26th overall pick to Phoenix.

Golf – The Masters – Scheffler’s journey to the Masters a true family affair
Masters champion Scottie Scheffler’s journey to Augusta was a true family affair. Scheffler and each of his three sisters have played golf, and his father Scott served as the stay-at-home dad while his mother Diane worked. Scottie Scheffler says having dad at home instead of mom wasn’t unusual to him, and Scott Scheffler said he was happy to be the one that ferried the children to various sporting events. Scott Scheffler described his only son as a “good kid” who will make a good champion after Scottie’s triumph underneath the Georgia pines.

NCAAFB – For new coach Freeman, Notre Dame success starts in trenches
First-year Notre Dame football coach Marcus Freeman knows success in the 2022 season will depend on how strong the Fighting Irish will be on the offensive and defensive lines. Notre Dame will have new assistant coaches in both places. Respected veteran Harry Hiestand returns for a second stint as offensive line coach. Al Washington is in charge of the defensive line. Notre Dame opens the season Sept. 3 against Ohio State.

Soccer – World Cup – Fox to televise 35 of 64 World Cup matches on main network
Fox will televise 35 World Cup matches on its main Fox broadcast network. That includes all three U.S. first-round games in Qatar and all from the quarterfinals on. The total on the Fox network is down from 38 at the 2018 tournament in Russia. There will be 29 on the FS1 cable network. This year’s tournament was shifted from its usual June-July period until Nov. 21 to Dec. 18 because of the summer heat in Qatar. U.S. Spanish-language television rights are held by NBCUniversal’s Telemundo.