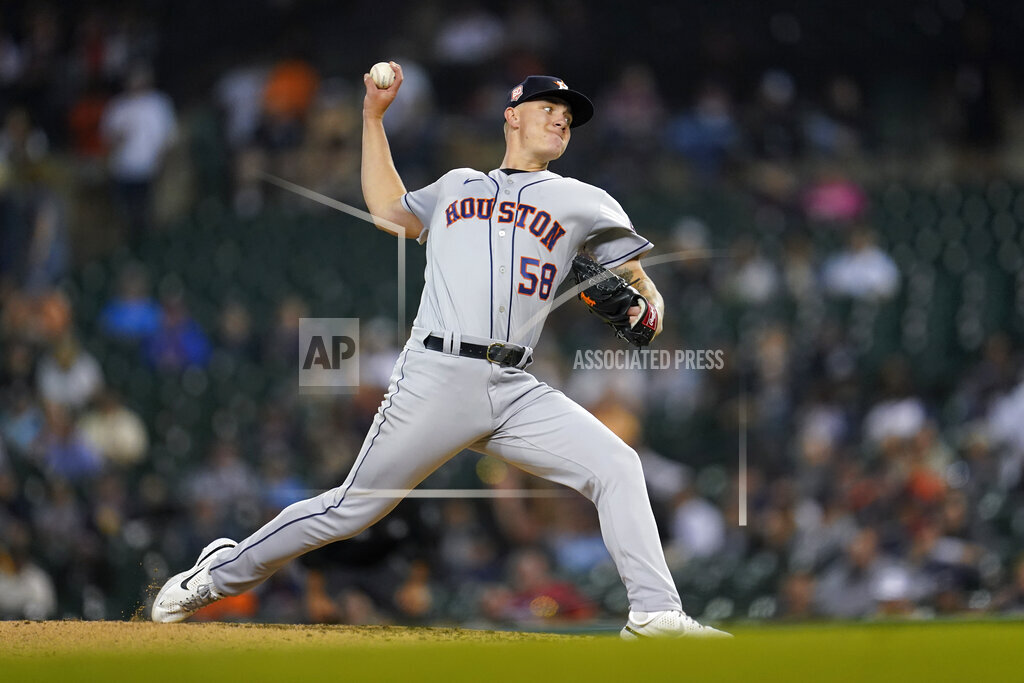 Astros 6, Tigers 3 – Astros’ Brown hurls 6 strong innings to beat hometown Tigers
Rookie Hunter Brown pitched six strong innings in his hometown and the Houston Astros beat the Detroit Tigers 6-3 on Tuesday. Yordan Alvarez homered and scored three times for the Astros, who are 6-0 against the Tigers this season. Brown allowed two runs. Brown made his second career start in front of a loud group of friends and family. He grew up in suburban Detroit and attended Wayne State, about a mile from Comerica Park. Ryan Pressly struck out the side in the ninth for his 27th save. Tigers starter Drew Hutchison allowed four runs in 5 1/3 innings.

White Sox 4, Rockies 2 – Jiménez, Abreu homer as surging White Sox beat Rockies 4-2
Eloy Jiménez hit a three-run homer and Miguel Cairo directed the Chicago White Sox to another victory, topping the Colorado Rockies 4-2. Michael Kopech pitched five effective innings as Chicago remained three games back of AL Central-leading Cleveland, which rallied for a 3-1 win against the Los Angeles Angels. José Abreu also went deep, and Liam Hendriks handled the ninth for his 33rd save. The White Sox improved to 10-4 since Cairo moved from bench coach to acting manager after Tony La Russa stepped away to deal with a heart issue.

Cubs 4, Mets 1 – Mets come up empty for deGrom and lose to Cubs again, 4-1
Jacob deGrom was outpitched by journeyman Adrian Sampson, and the frustrated New York Mets mustered little offense again in a 4-1 loss to the Chicago Cubs. Ian Happ homered deep into the second deck on a 99 mph heater from deGrom, and No. 9 batter David Bote added his second home run of the season for the Cubs, who won the series opener 5-2 on Monday. One night later, the scuffling Mets squandered another potential chance to increase their slim NL East lead over Atlanta, which played later in San Francisco. New York is 5-6 in a 16-game stretch against Washington, Pittsburgh, Miami and Chicago — all four of those teams are more than 20 games under .500 this season. Pete Alonso homered late for the Mets.

MLB – Still no timetable for La Russa’s return to White Sox dugout
The White Sox say manager Tony La Russa will watch the team’s home series against Colorado from a suite while he awaits clearance to return to the dugout. The 77-year-old La Russa is on the mend after leaving the White Sox on Aug. 30 to deal with a heart issue. La Russa rejoined the team in Oakland on Sunday and then flew home with the club for the two-game set against the Rockies. There is no timetable for the Hall of Famer when it comes to returning to the stress of in-game managing. Chicago begins a four-game trip on Thursday in Cleveland.

NFL – Preseason rest led to Week 1 rust for several top QBs
Preseason rest appeared to lead to a little bit of rust in Week 1 for several of the NFL’s top quarterbacks. More than one-third of the league’s Week 1 starting quarterbacks didn’t play a single snap in the preseason and most of those 11 QBs didn’t play anywhere close to their usual form. Whether the poor results were a result of rust or other factors isn’t clear but the poor results are. The only QBs to rest the entire preseason and end up on the winning side in Week 1 were Minnesota’s Kirk Cousins, Justin Herbert of the Chargers and Baltimore’s Lamar Jackson.

NFL – Amazon Prime ready to kick off ‘Thursday Night Football’
Thursday night’s game between the Los Angeles Chargers and Kansas City Chiefs on Prime Video kicks off an 11-year agreement between Amazon and the NFL and marks the first time the league has sold a package of games to a streaming service. Amazon won the rights to the prime-time package last March. It was originally supposed to begin in 2023, along with the rest of the league’s broadcasting contracts, but two months later it was announced that Amazon would take over the Thursday night package from Fox a year earlier.

Aces 85, Sun 71 – Aces beat Sun 85-71, take 2-0 series lead in WNBA Finals
A’ja Wilson had 26 points and 10 rebounds to lead the Las Vegas Aces to an 85-71 victory over the Connecticut Sun in Game 2 of the WNBA Finals. The Aces are now one victory away from the franchise’s first championship with Game 3 on Thursday in Connecticut. Las Vegas was swept in the 2008 Finals when the team was still in San Antonio. The Aces were also swept in 2020. Chelsea Gray added 21 for the Aces while Kelsey Plum rebounded from an awful Game 1 to score 20 points. Courtney Williams scored 18 points to lead Connecticut.

WNBA – Richardson visits Moscow as Griner, Whelan remain jailed
Bill Richardson, who has worked to secure the releases of WNBA star Brittney Griner and another jailed American, Paul Whelan, visited Moscow this week and held meetings with Russian leaders. That’s according to a person familiar with the matter who spoke to The Associated Press on Tuesday night. Richardson is a former U.S. ambassador to the United Nations and a frequent emissary in hostage negotiations. American officials have continued to press Russia to release Griner, who was sentenced last month to nine years in prison in a drug possession case, and Whelan, a Michigan corporate security executive serving a 16-year sentence on espionage-related charges. The U.S. government regards both as wrongfully detained.

NBA/WNBA – Suns owner Sarver suspended 1 year, fined $10M after probe
The NBA suspended Phoenix Suns and Phoenix Mercury owner Robert Sarver for one year and fined him $10 million after an investigation found that he had engaged in what the league called “workplace misconduct and organizational deficiencies.” The findings come nearly a year after the NBA asked a law firm to investigate allegations that Sarver had a history of racist, misogynistic and hostile incidents over his nearly two-decade tenure overseeing the franchise. The league said the results of the investigation were based on interviews with 320 individuals and more than 80,000 documents and other materials. Sarver apologized for “words and actions that offended our employees,” though he disagreed with some of the report’s findings.

NCAAFB – Big Ten – Joseph wants Nebraska head coaching job beyond this season
Mickey Joseph says he wants to be Nebraska’s next head football coach and not just on an interim basis for the next nine games. Joseph met with the media for the first time since taking over for the fired Scott Frost. Joseph says when he accepted the interim position, he did it thinking it would be an opportunity to work toward becoming the permanent head coach. Joseph’s audition starts Saturday with a home game against former conference rival and sixth-ranked Oklahoma.

NHL – Quebec politicos: New Habs captain Suzuki must learn French
Several of Quebec’s major party leaders say new Montreal Canadiens captain Nick Suzuki needs to learn French. The Canadiens announced the appointment of the 23-year-old Ontario native as the team’s captain earlier this week. He has played for Montreal the past three seasons. Liberal Leader Dominique Anglade told reporters it would be a good thing if Suzuki learned French. Parti Québécois Leader Paul St-Pierre Plamondon described Suzuki as a “very good choice” for captain but added that it is important for the Habs captain to learn French.

Golf – PGA/LIV – New PGA Tour season starts in California, LIV to Chicago
After two weeks of an offseason, the PGA Tour is ready for a new season. It starts with the Fortinet Championship in Napa, California. This will be the 10th and final year of a wraparound season. Max Homa is the defending champion. He won twice last season and will be making his Presidents Cup debut next week. Hideki Matsuyama also is playing. LIV Golf resumes outside Chicago at Rich Harvest Farms. The LPGA Tour is in Oregon while Rory McIlroy makes his debut in the Italian Open at Marco Simone. That’s the site of next year’s Ryder Cup.