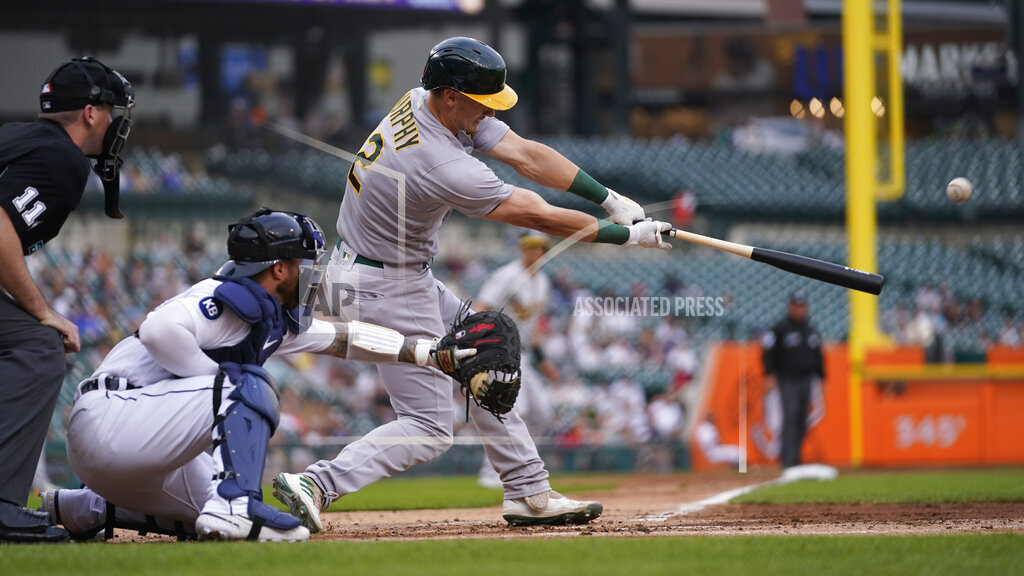 A’s 9, Tigers 0 – Logue pitches gem in 2nd start, A’s pound Tigers 9-0
Zach Logue pitched seven scoreless innings in his second major league start and the Oakland Athletics spoiled the debut of Joey Wentz by thumping the floundering Detroit Tigers 9-0. Sean Murphy and Kevin Smith each drove in two runs and Christian Bethancourt supplied three hits, two runs scored and an RBI for the A’s. Oakland, which entered Detroit on a nine-game losing streak, is 3-1 in the five-game series. The Tigers have lost eight of their last nine, scoring two runs or less in each of those defeats.

Guardians at White Sox, PPD/Covid – COVID outbreak postpones Guardians-White Sox game
Major League Baseball has its first coronavirus-related postponement of the season. Today’s series finale in Chicago between the White Sox and the Cleveland Guardians has been called off due to a COVID-19 outbreak in Cleveland’s clubhouse. Manager Terry Francona was among those testing positive. MLB said there were “multiple positive COVID-19 tests” within Cleveland’s organization and the game was postponed to allow for more testing and contact tracing. Francona tested positive a few hours before the scheduled first pitch. The team said the 63-year-old wasn’t showing any symptoms.

Cubs 7, Padres 5 – Rivas’ key hit vs hometown Padres lifts Cubs to 7-5 win
Alfonso Rivas hit a tiebreaking two-run single against his hometown team in the eighth inning, and the banged-up Chicago Cubs beat the San Diego Padres 7-5. Rivas came up with the bases loaded and singled to center off Luis García. The Padres announced during the game that manager Bob Melvin had prostate surgery and is expected to make a full recovery. Melvin said Tuesday that he hoped to miss only the first six games of the Padres’ forthcoming nine-game road trip. Willson Contreras homered for the Cubs, who took two of three in the series.

MLB – Cubs SS Hoerner leaves game after colliding with umpire
Chicago Cubs shortstop Nico Hoerner has exited a game against the San Diego Padres with a sore right ankle an inning after colliding with second base umpire Dan Iassogna in center field. Hoerner was on the ground in pain after the collision in the first inning and was tended to by a trainer. He stayed in the game and batted in the second, striking out. He was replaced in the bottom half of the inning by Ildemaro Vargas. Hoerner was running out to take the throw from Jason Heyward after Jurickson Profar hit a flyball over the center fielder’s head for a triple when the collision occurred.

NFL – Bears add depth at wide receiver by signing Dante Pettis
The Chicago Bears added depth at wide receiver, agreeing to a deal with free agent Dante Pettis. The 26-year-old Pettis announced the move on Twitter, posting a photo of himself signing a contract. Drafted by San Francisco in the second round in 2018, he has 52 receptions for 739 yards and nine touchdowns over four seasons with the 49ers and New York Giants. Pettis was limited to three games with the Giants last year because of a shoulder injury on a punt return. The Bears also claimed tight end Rysen John off waivers from the Giants and signed quarterback Nathan Peterman. They waived tight end Jesper Horsted following a failed physical and quarterback Ryan Willis.

NCAAFB – ACC mulling division-free football scheduling model by 2023
The Atlantic Coast Conference is mulling a change to its football scheduling model that could include the elimination of divisions by 2023. Discussions are taking place during the league’s annual spring meetings. The focus is a 3-5-5 model that would have teams playing three opponents as permanent scheduling partners annually then rotating through the other 10 teams over two seasons in that eight-game schedule. Currently teams can go years without meeting and have one permanent cross-division opponent. The discussions come after the ACC’s 2020 season nixed divisions and added Notre Dame for one year amid the COVID-19 pandemic.

Horse Racing – Derby-winning rider Leon serving suspension by Ohio stewards
The jockey of Kentucky Derby upset winner Rich Strike is currently serving a four-day suspension that was handed down by Ohio racing stewards. His agent says it won’t prevent him from riding the horse in next week’s Preakness. Stewards last week suspended Sonny Leon for careless riding in the third race on April 27 at Thistledown Racecourse, during which he “deliberately and aggressively” steered One Glamorous Gal toward the rail to block other horses in the stretch.