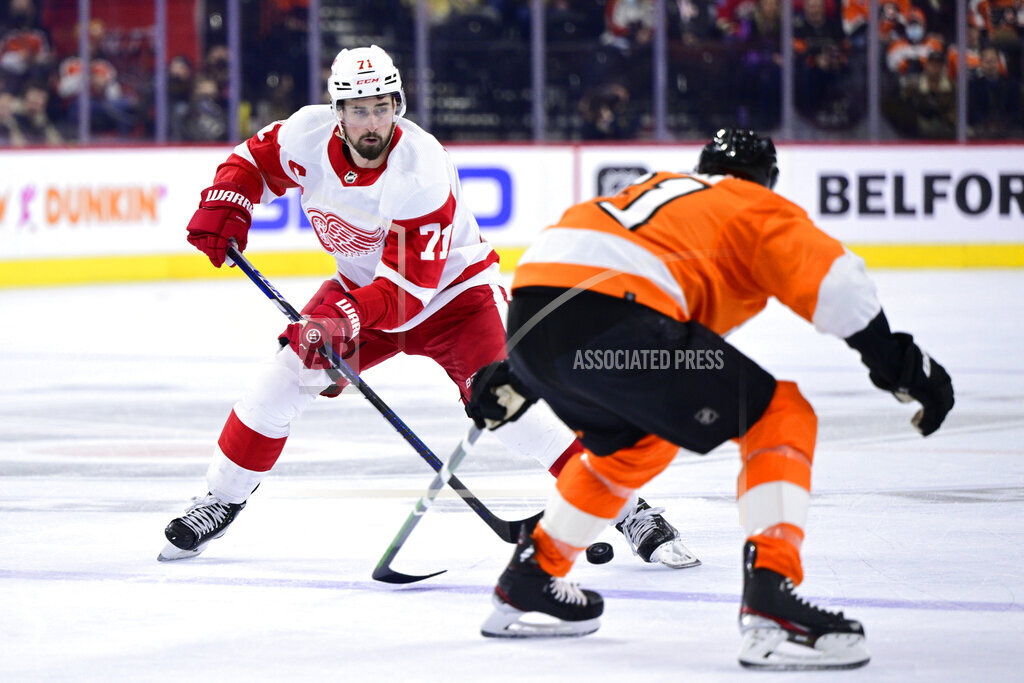 Red Wings 6, Flyers 3 – Red Wings score two goals in each period, top Flyers 6-3
Pius Suter and Robby Fabbri scored goals to help the Detroit Red Wings beat the Philadelphia Flyers 6-3 on Wednesday night. The Flyers three times scored seconds after a Detroit goal. Givani Smith sealed the win for Detroit with his fourth goal in the third and Vladislav Namestnikov added an empty-netter in the final minute. Dylan Larkin and Lucas Raymond also scored for Detroit. The Red Wings were bailed out when defenseman Marc Staal saved the puck from trickling past the goal line to keep the game tied early.

Blackhawks 4, Oilers 1 – DeBrincat has goal, 2 assists as Blackhawks beat Oilers 4-1
Alex DeBrincat had a goal and two assists as the Chicago Blackhawks got off to fast start and beat the Edmonton Oilers 4-1. Brandon Hagel, Dylan Strome and Kirby Dach also scored for the Blackhawks, who snapped a three-game losing streak. Marc-Andre Fleury stopped 40 shots — the fourth time this season he’s had at least that many saves. Leon Draisaitl scored for the Oilers, who have lost two in a row and have just three wins in their last 11 at home. Mike Smith had 26 saves.

Notre Dame 63, Louisville 57 – Notre Dame alone in first place in ACC after 63-57 win
Paul Atkinson Jr. scored 17 points and grabbed a career-high 15 rebounds as Notre Dame recovered after blowing a 14-point lead to beat Louisville 63-57 for sole possession of first place in the Atlantic Coast Conference. The Fighting Irish won for the seventh time in eight games and broke a first-place tie with idle Duke. Atkinson collected his third straight double-double, Dane Goodwin added 16 points and Blake Wesley 11 for Notre Dame, which beat Louisville twice in the same season for the first time. Jae’Lyn Withers scored a career-tying 20 points, El Ellis added 13 and Dre Davis 10 for the Cardinals, who have lost six straight games for the first time since the 1990-91 season.

Bulls 121, Hornets 109 – DeRozan, Vucevic lead Bulls past struggling Hornets 121-109
DeMar DeRozan scored 36 points, Nikola Vucevic added 18 points, 15 rebounds and eight assists and the Chicago Bulls handed the Charlotte Hornets their sixth consecutive loss, 121-109. Zach LaVine chipped in with 27 points for the Bulls (34-21), who pulled back to within one game of the Eastern Conference leading Miami Heat. LaMelo Ball had 33 points and nine rebounds to lead the Hornets, who continued to struggle with their long distance shooting. During their six-game losing streak, the Hornets finished their homestand 0-4.

NFL – Goodell says league won’t tolerate racism or discrimination
Under a baking California sun, Roger Goodell knew the heat was coming. At his annual Super Bowl news conference, the NFL commissioner was grilled on two hot topics that have put the league under heavy scrutiny: racism and discrimination in hiring. There were other issues that don’t shine a positive light on pro football, including threats to the integrity of the sport, and misconduct by players and team executives. A week after former Miami Dolphins coach Brian Flores, who is Black, filed a lawsuit alleging both racism in the league and being offered money by team owner Stephen Ross to tank games, Goodell vowed action on several fronts.

NFL – NFL says it will oversee investigation of Commanders’ Snyder
The NFL has moved quickly to take over an investigation into alleged sexual harassment by Washington Commanders owner Dan Snyder. The announcement came hours after the Commanders said the team had hired an outside investigator to look into allegations by former team employee Tiffani Johnston. She told Congress that Snyder groped her thigh at a team dinner more than a decade ago and then pushed her toward his limousine with his hand on her lower back. NFL spokesman Brian McCarthy says the league “will be retaining an investigator to determine the facts." NFL Commissioner Roger Goodell says a team cannot investigate itself.

MLB – MLB lockout talks to resume Saturday after 11-day break
Major League Baseball and its locked-out players agreed to resume negotiations Saturday after an 11-day break. The session in New York will follow three days of owners’ meetings in Orlando that end Thursday and three days of players’ association sessions in Arizona and Florida. It will be just the fifth negotiating session on core economics since the lockout started in early December. There is virtually no chance spring training workouts can start as scheduled on Feb. 16, a casualty of baseball’s ninth work stoppage, its first since 1995. Baseball Commissioner Rob Manfred is expected to hold a news conference Thursday following the end of the owners’ meetings. He has not publicly addressed the standoff since Dec. 2, the day the lockout began.

Iditarod – Iditarod loses support of hotel that was race headquarters
The hotel that has served for nearly three decades as the Anchorage-based headquarters for the Iditarod Trail Sled Dog Race will end its association with the competition next year. Hotel and race officials tell the Anchorage Daily News the Lakefront Anchorage Hotel will still act as race headquarters for this year’s race. Its owners, Millennium Hotels and Resorts, announced the change Wednesday. That was a day before the race’s biggest critic, People for the Ethical Treatment of Animals, was expected to protest at the Millennium Knickerbocker Hotel Chicago to denounce the company’s support of the Iditarod. The manager of the Anchorage hotel blamed the decision on the economic toll of the pandemic.