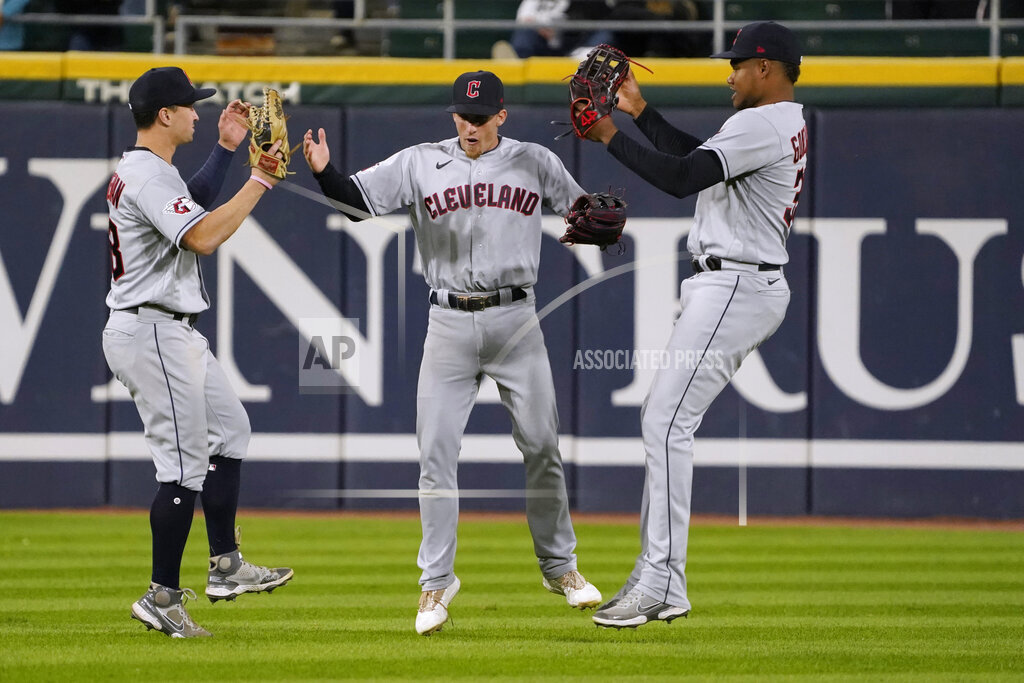 Guardians 4, White Sox 2 – Bieber wins again as Guardians beat White Sox 4-2 for sweep
Shane Bieber pitched two-run ball into the eighth inning, and the Cleveland Guardians beat the Chicago White Sox 4-2 for a three-game series sweep. Cleveland opened a seven-game lead over Chicago in the AL Central with its 15th win in 18 games. The Guardians can clinch the franchise’s first division title since 2018 as early as Sunday. Bieber earned his fourth straight win. Gavin Sheets homered for Chicago in the eighth.

Cubs 3, Pirates 2 – Wesneski has immaculate inning, pitches Cubs over Bucs 3-2
Rookie Hayden Wesneski had an immaculate inning in his second major league start to lead the Chicago Cubs to a 3-2 victory over the skidding Pittsburgh Pirates. Wesneski (2-1) gave up two runs and five hits in 6 1/3 innings while striking out six and walking two in sending Pittsburgh to its seventh straight loss. It was his fourth appearance in the majors. Acquired from the New York Yankees at the trade deadline, Wesneski had an immaculate inning in the fifth when he struck out the side on nine pitches. The Cubs have a three-game winning streak.

Brown 29, Steelers 17 – Brissett, Browns rebound from collapse, beat Steelers 29-17
Jacoby Brissett threw two touchdown passes, Nick Chubb ran for a score and the Cleveland Browns bounced back from their epic meltdown four days earlier to beat the rival Pittsburgh Steelers 29-17. The Browns built a nine-point lead early in the fourth on Chubb’s 1-yard run and then held on for dear life. On Sunday, Cleveland blew a 13-point lead in the final two minutes and lost by a point to the New York Jets. The Steelers pulled within 23-17 on Chris Boswell’s 34-yard field goal with 1:48 left but couldn’t recover an onside kick. The Browns concluded the game with a meaningless defensive touchdown.

NFL – Bears’ Smith misses second straight practice with hip injury
Chicago Bears star linebacker Roquan Smith missed his second consecutive practice because of a hip injury, leaving his status for Sunday’s game in question. The Bears are scheduled to host former coach Lovie Smith and the Houston Texans. Smith has played every snap this season. Defensive coordinator Alan Williams said before practice he expected him to be ready to play “as far as I know.” Smith missed the preseason after he opted to “hold-in” with contract extension talks at a standstill.

NFL – Smith returns to Soldier Field as Texans seek win over Bears
Lovie Smith makes another return to Soldier Field, and the Houston Texans try to pick up their first win when they visit the Chicago Bears. Smith led the Bears to an 81-63 record and a Super Bowl appearance from 2004-12. He is 0-2 against Chicago, with losses coaching Tampa Bay in 2014 at Soldier Field and 2015 at Raymond James Stadium. The Bears have not gotten their passing game going. Justin Fields has attempted a league-low 28 passes. His 15 completions are tied for 31st among qualifiers. Chicago has by far the fewest yards passing at 153 yards.

NCAAFB – Utah student charged for terrorism threat over football game
A University of Utah student was arrested on suspicion of making terrorist threats after police said she threatened to detonate a nuclear reactor if the school’s football team failed to win a game last Saturday. Charging documents filed in Salt Lake City on Wednesday allege that the student posted threats before Utah’s game against San Diego State University on Saturday. The University of Utah said Thursday that the student admitted to posting the threat and told investigators that it was meant as a joke. Utah defeated San Diego State in Saturday’s game, 35-7.

NBA – AP source: Jazz trade Bogdanovic to Detroit for Olynyk, Lee
The revamping of the Utah roster continued Thursday with the Jazz agreeing to send forward Bojan Bogdanovic to the Detroit Pistons for forward Kelly Olynyk and guard Saben Lee, according to a person with knowledge of the trade. The person confirmed the trade Thursday to The Associated Press on condition of anonymity because not all details had been completed. That prevented the deal from being announced by either team. The Jazz now have traded all but one of their primary starters from last season.

NBA – Celtics suspend coach Ime Udoka for 2022-23 season
The Boston Celtics have suspended coach Ime Udoka for the 2022-23 season. The move takes effect immediately and with no guarantee he will be back with the franchise. The Celtics said Thursday night that Udoka was suspended for “violations of team policies.” Earlier Thursday, two people with knowledge of the matter said Udoka was being sanctioned because of an improper relationship with a member of the organization. Those people spoke to The Associated Press on condition of anonymity because the team did not reveal that detail publicly.

NHL – Kane, Toews have no plans to leave the Blackhawks — yet
Chicago Blackhawks stars Patrick Kane and Jonathan Toews haven’t started making plans to leave the only NHL team they’ve ever played for. The franchise’s marquee names said they aren’t even thinking about it as rebuilding Blackhawks opened training camp Thursday. The 33-year-old Kane and 34-year-old Toews are in the final years of eight-year, $84 million contracts with no movement clauses. Both will become free agents at the end of the 2022-23 season, unless they consent to a trade to another team before then.

Golf – Newcomers Young, Homa help US take Presidents Cup lead
Cameron Young didn’t flinch in his first Presidents Cup. Neither did Max Homa. They are among the new blood on the United States team and they made the most of their opportunities in alternate-shot play, earning points to help the Americans take a 4-1 lead over the International team at Quail Hollow. Young buried a 25-foot birdie putt on the par-4 17th hole as he and Collin Morikawa closed out Tom Kim and K.H. Lee 2-and-1. Homa and Tony Finau won a tight match by making par on the 18th hole after Mito Pereira hooked his drive into the trees.