Tigers 6, Indians 3 – F/5 – Cabrera’s homer gives Tigers rain-shortened win over Indians
Miguel Cabrera hit a tiebreaking three-run homer in the fifth inning, moments before the game was halted for good, and the Detroit Tigers came away with a rain-shortened 6-3 victory over the Cleveland Indians Wednesday night. The victory helped Detroit to keep pace with Baltimore in the AL wild-card race. Detroit trails the Orioles by one game for the AL’s second wild card, and the Tigers certainly caught a break in this one. The rain was a factor throughout the evening _ there was also a delay during the third inning _ and it was certainly coming down when Detroit began its rally in the fifth at Comerica Park. With two on and one out, Cabrera hit a line drive over the wall in right off Joseph Colon (1-3) for his 36th homer. Blaine Hardy (1-0) won in relief of Michael Fulmer, who lasted only 3 1/3 innings on the wet night.

White Sox 1, Rays 0 – Frazier’s 40th HR leads Gonzalez, White Sox over Rays 1-0
Todd Frazier hit his 40th home run, Miguel Gonzalez waited out a rain delay to throw 8 1/3 dominant innings and the Chicago White Sox edged the Tampa Bay Rays 1-0 on a soggy Wednesday night. The game was also delayed by 21 minutes before the start. It was 57 degrees at first pitch and rain came and went amid blustery conditions as a tiny crowd watched Chicago win its fifth straight. The game itself lasted only 2 hours, 10 minutes at U.S. Cellular Field.

Pirates 8, Cubs 4 – Jaso hits for cycle as Pirates beat Cubs 8-4
John Jaso hit for the cycle and drove in five runs to lead the Pittsburgh Pirates to an 8-4 victory over the Chicago Cubs Wednesday night. Jaso tripled off Chicago reliever Pedro Strop in the seventh inning to clinch the first cycle in the history of PNC Park and the first for the Pirates since 2004. Chicago’s Anthony Rizzo hit a solo homer, his 32nd of the season.

MLB – Tigers Zimmerman set to return to mound Friday
Jordan Zimmermann is set to pitch Friday night for the playoff-chasing Detroit Tigers in what would be his first start in nearly three weeks. Zimmermann has been trying to regain his effectiveness after missing significant time with neck issues. He allowed six runs in one inning Sept. 10 in his most recent start.

MLB – Cubs reward Epstein for turnaround with 5-year extension
The Chicago Cubs have agreed to a five-year contract extension with president of baseball operations Theo Epstein, rewarding him for an overhaul that has the long-suffering franchise eyeing its first championship since 1908. The extension comes with the Cubs wrapping up one of the greatest seasons in franchise history and their attention clearly fixed on winning their first World Series in more than a century.

MLB – Stay or go? White Sox manager Robin Ventura mum on 2017
Chicago White Sox manager Robin Ventura won’t say whether he’s been offered the chance to return next season and backtracked from an earlier comment that he’d like to come back for a sixth season. USA Today reported Wednesday the White Sox decided to retain Ventura, if he wants to stay. Citing an unnamed official, the report indicated that Ventura hasn’t told the front office of his 2017 plans. The 49-year-old Ventura told reporters last month that he did want to return. But when asked that question again before Wednesday’s game against Tampa Bay, he said he’ll “wait until the end of the year to discuss it.” General manager Rick Hahn declined an interview request and a team spokesman said he’s not planning to talk to reporters until Monday, the day after the season ends. Ventura is in the last year of his contract. He’s 373-432 with no playoff appearances.

NFL – Bears’ Cutler returns to practice after missing game
Chicago Bears quarterback Jay Cutler returned to practice on a limited basis Wednesday after missing a game because of a sprained right thumb.  Cutler was injured against Philadelphia on Sept. 19 and sat out last week’s 31-17 loss at Dallas. Veteran Brian Hoyer went 30 of 49 for 317 yards filling in against the Cowboys and would likely start again if Cutler is not available against Detroit this week. The Bears (0-3) have battled a long line of injuries, and on top of that, coach John Fox missed practice because of a stomach illness on Wednesday.

Red Wings 5, Bruins 1
Luke Glendening and Steve Ott each had a goal and an assist to help the Detroit Red Wings beat the Boston Bruins 5-1. Drew Miller, Anthony Manta and Kyle Criscuolo also scored for Detroit, and Jared Coreau made 35 saves.

Sparks 95, Sky 75 – Parker and Ogwumike lead Sparks’ 95-75 rout of Sky
Candace Parker scored 19 of her 30 points in the first half, Nneka Ogwumike added 27, and the Los Angeles Sparks beat the Chicago Sky 95-75 in their semifinal playoff opener Wednesday night. The Sky was missing the injured Elena Delle Donne. Game 2 is Friday 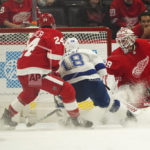 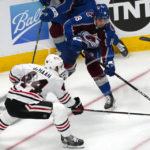