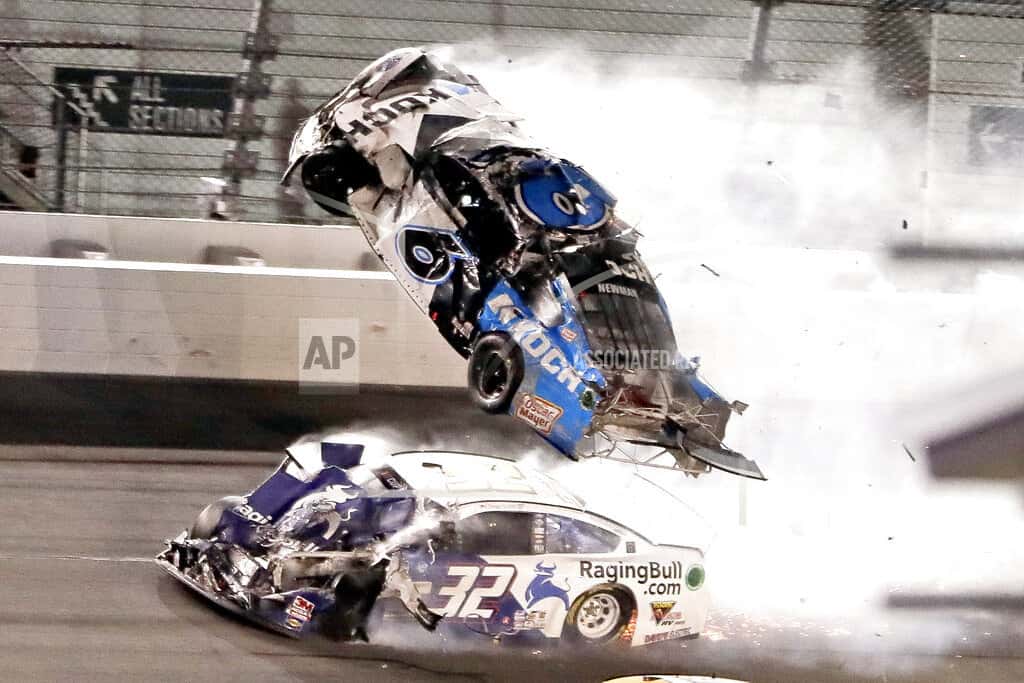 NASCAR – Hamlin wins; concern for Newman
There was celebration for Denny Hamlin and great concern for Ryan Newman at the end of the Daytona 500.  Hamlin is the first driver to win back-to-back Daytona 500s since Sterling Marlin in 1994 and ’95. Hamlin joined six Hall of Fame drivers as winners of three or more Daytona 500s. This victory comes after just the second rain postponement in 62 years, a pair of red flag stoppages and two overtimes.  Hamlin’s celebration quickly became muted as drivers awaited an update on Newman’s condition following a crash at the end. Two hours after the race, NASCAR read a statement from Roush Fenway Racing that said Newman is in “serious condition, but doctors have indicated his injuries are not life threatening.”  Newman had surged into the lead on the final lap when Ryan Blaney’s bumper caught the back of his Ford and sent Newman hard right into the wall. His car flipped, rolled and was hit on the driver’s side by Corey LaJoie’s car before finally skidding across the finish line in flames.  It took several minutes for his car to be rolled back onto its wheels. The 2008 Daytona 500 winner was placed in a waiting ambulance and taken directly to a hospital, and the damage to his Mustang was extensive. It appeared the entire roll cage designed to protect his head had caved.  Newman’s accident comes 19 years after Dale Earnhardt was killed on the last lap of the 2001 Daytona 500. Earnhardt was the last driver killed in a NASCAR Cup Series race.  The 0.014 margin of victory was the second closest in race history. Chris Buescher finished third, followed by David Ragan and Kevin Harvick.

NBA – Beilein pondering future with Cavs
Cleveland Cavaliers head coach John Beilein has discussed with team officials the possibility of him stepping down before the end of the season.  ESPN.com first reported the possibility of Beilein leaving the team before the end of the season on Sunday night as the All-Star Game wrapped up in Chicago. The team is 14-40 amid reports that players have not been pleased with Beilein’s coaching style, calling it simplistic with too much emphasis on fundamentals.  Beilein went 829-468 as a college coach. He won 428 games at Michigan, leading the Wolverines to nine NCAA tournament appearances and two Final Fours in his 12 seasons.  If Beilein does step down, associate head coach JB Bickerstaff would likely replace him.

NBA – All-Star Game ratings up
Ratings for the NBA All-Star Game were up 8% over last year, with an average of 7.3 million viewers watching Sunday night’s broadcast on TNT. About 8 million viewers were tuned in for the end of the game, where LeBron James’ team defeated Giannis Antetokounmpo’s team 157-155 in the first target-score format in All-Star history. The fourth quarter was untimed and was broadcast commercial-free.

MLB – Cubs’ Ricketts not convinced spending more would boost team
Cubs chairman Tom Ricketts isn’t convinced bringing in more high-priced free agents during the offseason would have boosted Chicago. Star third baseman Kris Bryant said last weekend the Cubs have the financial ability to keep their All-Star core together. Ricketts insisted the $208 million luxury tax threshold isn’t holding the Cubs back. Ricketts said that some of the flexibility the front office may have had coming into 2020 was used last season to added closer Craig Kimbrel for $43 million over three seasons.