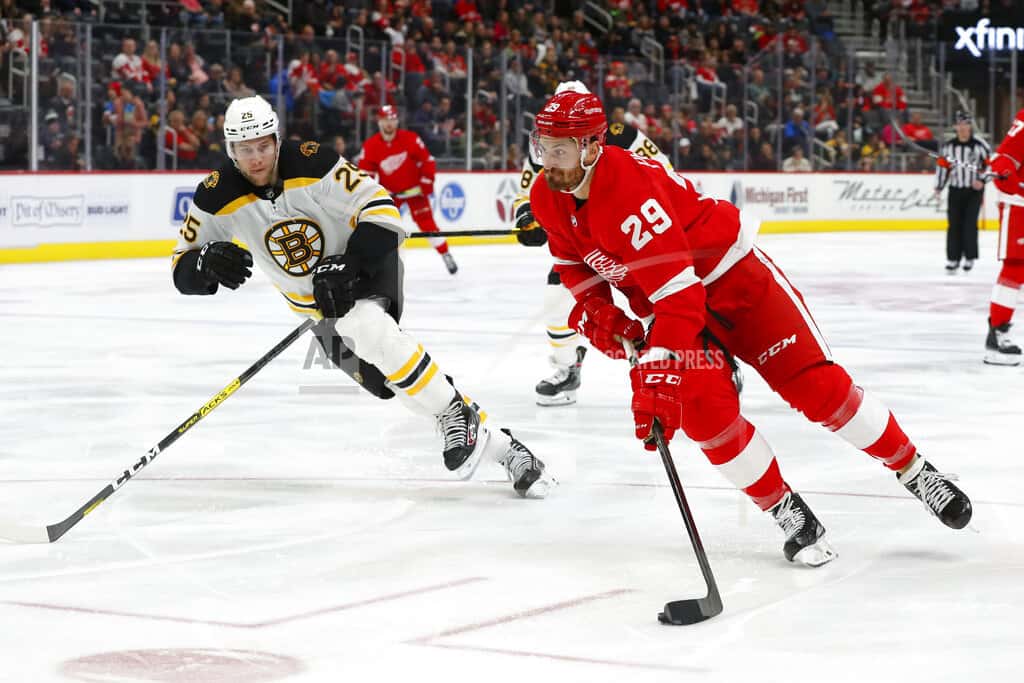 Red Wings 3, Bruins 1 – NHL-worst Red Wings beat league-best Bruins 3-1 for 2nd time
Andreas Athanasiou snapped a tie midway through the third period and scored an empty-net goal in the final minute, lifting the Detroit Red Wings to a 3-1 win over the Boston Bruins. Detroit is easily the worst team in the NHL, but the rebuilding Red Wings have defeated the league-best Bruins in both of their games this season. Boston had won six straight until the Red Wings stopped the streak with their second win in three games. Detroit’s Jonathan Bernier made 39 saves. Tuuka Rask stopped 17 shots for the Bruins, who expected to start Jaroskav Halak before he felt ill.

Jets 5, Blackhawks 2 – Jets use 4-goal third period to rally past Blackhawks 5-2
Andrew Copp had the go-ahead score in Winnipeg’s four-goal third period and the Jets rallied to beat the Chicago Blackhawks 5-2. Copp gave Winnipeg a 3-2 lead when he beat Corey Crawford up high from in close with 6:33 left after taking a perfect pass from forward Jack Roslovic. Kyle Connor had a pair of goals, and Blake Wheeler and Patrick Laine also scored for the Jets, who trailed 2-0 after 20 minutes. Dominik Kubalik and Brandon Saad scored for the Blackhawks. Connor Hellebuyck made 24 saves to help the Jets win their third straight.

Sixer 118, Bulls 111 – Korkmaz, Embiid lead 76ers past Bulls
Furkan Korkmaz scored 31 points, Joel Embiid had 28 points and 12 rebounds and the Philadelphia 76ers beat the Chicago Bulls 118-111 to improve their NBA-best home record to 24-2. Ben Simmons added 19 points, 10 assists and nine rebounds for the 76ers. Korkmaz stayed hot after netting a career-high 34 points in Friday’s 119-107 home win over Memphis. He made 12 of 17 field goals, including 6 of 11 3-pointers. Zach LaVine scored 32 points and Luke Kornet added 25 for the short-handed Bulls, who have lost five straight.

Notre Dame 61, Clemson 57 – Pflueger’s 18 lead Notre Dame to 61-57 win at Clemson
Rex Pflueger had 18 points, and John Mooney had 16 points and 11 rebounds as Notre Dame won its fourth straight with a 61-57 victory over Clemson on Sunday night. The Fighting Irish rallied from seven points down in the second half to send Clemson to its third straight defeat. With the game tied at 50, T.J. Gibbs put Notre Dame ahead for good with floater in the lane with 3:44 to go. Pflueger increased the lead with a 3-pointer with 1:07 to play. Alex Hemenway and Tevin Mack led Clemson with 16 points each.

NASCAR – Stenhouse Jr., Bowman take front row for Daytona 500 pole
Ricky Stenhouse Jr. and Alex Bowman are the first two drivers to qualify for next Sunday’s Daytona 500.  Stenhouse captured the pole with a top lap of 194.582 mph in his first qualifier for JTG-Daugherty Racing, which signed him after he was fired by Roush Fenway Racing last season. Bowman will start on the outside of the front row after posting a top lap of 194.363 mph. The starting order for the rest of the 40-car field will be determined by Thursday’s two qualifying races at Daytona International Speedway. Chase Elliott was third in Sunday’s qualifying, followed by Jimmie Johnson and defending champion Denny Hamlin.

MLB – Dodgers get Betts, Price, while Maeda goes to Twins
The Red Sox and Dodgers have reworked a deal that is sending outfielder Mookie Betts and pitcher David Price to Los Angeles. A person with knowledge of the negotiations tells The Associated Press that the Red Sox are receiving outfielder Alex Verdugo and prospects Jeter Downs and Connor Wong for Betts and Price. Boston was to send cash to the Dodgers to offset Price’s salary, reportedly half of the $96 million still owed to the 2012 AL Cy Young Award winner. The Red Sox, Dodgers and Twins had a tentative deal in place last week that included Minnesota prospect Brusdar Graterol to Boston. The trade fell apart when Boston had issues over Graterol’s arm health. Instead the Twins are sending Graterol to Los Angeles for Kenta Maeda.

MLB – Morton regrets not trying to stop Astros from stealing signs
Two-time All-Star pitcher Charlie Morton says he regrets not doing anything to try to stop the Houston Astros from illegally stealing signs and relaying information to their hitters during the team’s 2017 World Series championship season. Morton helped the Astros win the 2017 title in his first season with the team, winning Game 7 of both the ALCS and World Series. He says he’s not sure what he could have done to stop his former teammates and doesn’t recall specifics about who did what wrong in 2017. Morton spent one more season with the Astros before signing a two-year deal with the Rays last winter.

PGA – Canadian Taylor wins at Pebble Beach
Nick Taylor has captured his second PGA title and first since his fourth career start in 2015. The Canadian handled high winds to capture the AT&T Pebble Beach Pro-Am by four strokes over Kevin Streelman. Taylor built a five-stroke lead by the turn and dealt with 40 mph gusts blasting the Monterey Peninsula. Taylor closed with a 2-under 70 for a 19 under total. Streelman finished with a 68. Phil Mickelson got within two shots with four holes to play before signing off on a 74 that left him alone in third place.