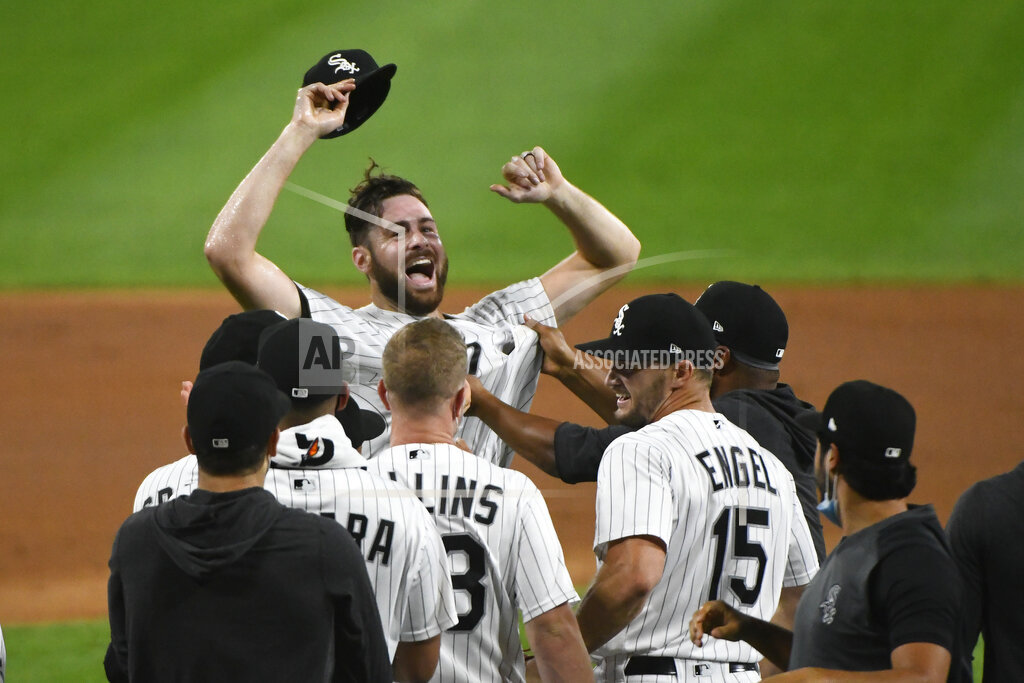 White Sox 4, Pirates 0
Lucas Giolito pitched the first no-hitter of the pandemic-delayed major league season, striking out 13 and permitting just one runner in leading the Chicago White Sox over the Pittsburgh Pirates 4-0. With the seats at Guaranteed Rate Field empty, the hollers of his teammates echoed around the ballpark after right fielder Adam Engel caught Erik Gonzalez’s slicing drive toward the line for the final out. An All-Star last year, the 26-year-old Giolito matched his career high for strikeouts set in his previous start against Detroit. Only a four-pitch walk to Gonzalez leading off the fourth inning got in Giolito’s way of perfection.

Tigers 7, Cubs 1
Jonathan Schoop hit a grand slam in a five-run sixth inning as the Detroit Tigers beat the Chicago Cubs 7-1. The Tigers have won three of five since a nine-game losing streak dropped them out of serious postseason contention. Chicago still leads the NL Central despite going 5-8 in its last 13 games.Spencer Turnbull (3-2) picked up the win with 5 2/3 scoreless innings. He allowed three hits and walked three while striking out five. Cubs starter Tyler Chatwood (2-2) struggled in his return from the injured list, allowing eight baserunners while getting just four outs

NHL
The NHL has fined Columbus Blue Jackets coach John Tortorella $25,000 for his conduct during a media session after his team was eliminated from the playoffs. Following the Tampa Bay Lightning’s Game 5 victory over the Blue Jackets, Tortorella ended his video news conference after two questions and walked away.

NCAA Football
A lawsuit filed in federal court alleges the University of New Mexico, former football coach Bob Davie and the NCAA didn’t protect 21-year-old Nahje Flowers, who died from a self-inflicted gunshot wound in November. The suit alleges that Davie ignored a player’s plea for help in his fight against depression and instead made the lineman play a game before he took his own life. Court documents said the defensive standout had sought counseling to fight depression, but Davie overruled a therapist’s recommendation that Flowers take some time off.

NFL
The Lions decided not to practice on Tuesday, protesting after a Black man was shot by police in Wisconsin. Lions coach Matt Patricia opened the team’s morning meeting by allowing players to share their thoughts on the shooting of Jacob Blake, who is paralyzed from the waist down. Blake was shot Sunday, three months after the death of George Floyd at the hands of Minneapolis police.

Golf – Champions
Phil Mickelson continues to lead the PGA Tour Champions’ Charles Schwab Series event in Missouri. Mickelson followed his opening-round 61 with a 7-under 64 that leaves him 17 under for the tournament. He’s four strokes ahead of Rod Pampling and Tim Petrovic, who shot 65s on Tuesday.

Track and Field
Jamaica’s Minister of Health says legendary sprinter Usain Bolt has tested positive for the novel coronavirus. Bolt said he’s trying to be responsible and will stay indoors and self-quarantine. He said he has no symptoms. The world record holder in the 100 and 200 meters retired in 2017.