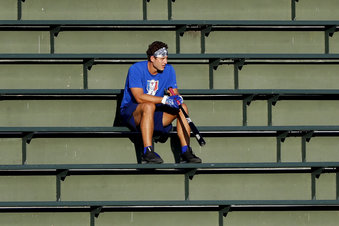 Anthony Rizzo’s back trouble flared up again after he took batting practice over the weekend, and the Chicago Cubs are sending the slugger for tests. Rizzo has been dealing with back tightness during summer camp, a recurring problem throughout his career. The first baseman took live BP on Sunday before the issue surfaced again. Manager David Ross says Rizzo remains day to day.

A former Michigan State University head gymnastics coach is scheduled to be sentenced for lying to police during an investigation into ex-Olympic and university sports doctor Larry Nassar. Sixty-five-year-old Kathie Klages was found guilty by a jury in February of a felony and a misdemeanor for denying she knew of Nassar’s abuse prior to 2016 when survivors started to come forward publicly. Nassar was sentenced in 2018 to 40 to 175 years in prison for decades of sexual abuse to hundreds of athletes. Klages is the second person other than Nassar to be convicted of charges related to his serial molestation of young women and girls under the guise of medical treatment.

The first female to publicly say she was sexually abused by a team doctor at the University of Michigan says she hopes to inspire other women and men to come forward. Cathy Kalahar played tennis for the Wolverines in the 1970s. She has joined hundreds of Michigan graduates who allege doctor Robert Anderson molested them. Anderson died in 2008. Kalahar told The Associated Press on Monday that Anderson assaulted her during an exam when she was a freshman in 1973. She says a school counselor dismissed her complaint about the assault as a “sexual fantasy.”

Harrison Barnes of the Sacramento Kings became the latest NBA player to reveal that he has coronavirus. He went on to say that he still hopes to join his team at the league’s restart in a few weeks. Barnes is the only player who has started all 64 of the Kings’ games this season. Their season resumes with the first of its eight seeding games July 31 against San Antonio.

The Southeastern Conference is postponing the start of volleyball, soccer and cross country competition through at least the end of August because of COVID-19.
The league says that provides more time to prepare for a safe return to competition on an adjusted timeline. The decision includes all exhibition and non-conference games.
Each school will be responsible for any rescheduling of non-conference contests impacted by the postponement.
The SEC has yet to make any announcement on the football season. The Big Ten and Pac-12 have opted to only play conference games.

About 10 Major League Baseball umpires have opted out this season, choosing not to work games in the shortened schedule because of concerns over the coronavirus. There are 76 full-time MLB umpires and more than 20 of them are age 55 or over. Joe West and Gerry Davis are the oldest umps at 67. Umpires who are deemed at risk — either for their age, health situation or other issues — and opt out will continue to get paid. Umps get their salaries over 12 months and have already been paid through April.

A top Canadian government health official says a longer stretch of home games might help the Blue Jays to get approval to play in Toronto amid the pandemic. Deputy Chief Public Health Officer Dr. Howard Njoo says back and forth travel from the U.S. where cases are surging is a major issue that could prevent the government from approving MLB to play in Canada. MLB requires an exemption to a requirement that anyone entering Canada for nonessential reasons must self-isolate for 14 days. The U.S.-Canada border remains closed to nonessential travel. The Blue Jays’ home opener is scheduled for July 29 against Washington.

The Kansas City Chiefs have agreed with defensive tackle Chris Jones on a four-year, $85 million contract extension that includes $60 million in guarantees. The Chiefs and representatives for Jones have been working on a contract extension ever since last year, when they remained far apart on terms and the Pro Bowl selection skipped offseason programs.

A person familiar with the negotiations tells The Associated Press that the Cleveland Browns are closing in on a massive contract extension with star defensive end Myles Garrett. He was the No. 1 overall pick in 2017 and is one of the NFL’s premiere edge rushers. Garrett and the Browns could have the deal completed in the next day or so. NFL Network reported the extension could be for five years and $125 million.

The New England Patriots have joined a growing list of NFL teams who hope to play home games this season in front of a significantly reduced number of fans to help reduce the spread of COVID-19. The team announced Tuesday that it plans to play in front of about 20% of Gillette Stadium’s capacity, if approved by state and local officials. The stadium’s capacity is just under 66,000.