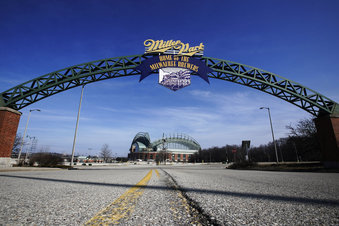 The Milwaukee Brewers say a man illegally entered Miller Park and caused minor damage to the playing field Tuesday morning. Brewers officials say he was apprehended by law enforcement shortly after gaining access to the field. Milwaukee police say a 40-year-old man was arrested and that the incident occurred shortly after 7:30 a.m. Police say criminal charges will soon be referred to the Milwaukee County District Attorney’s Office.

The Mountain West is eliminating postseason tournaments in baseball, men’s and women’s tennis and women’s soccer and shortening other postseason events. The conference announced several cost-cutting measures, including an 18% reduction in the conference operating budget.

Bowling Green baseball is now safe.
The school said Tuesday it is immediately reinstating its baseball program, which had been dropped last month due to financial hardships caused by the COVID-19 pandemic. Bowling Green was facing a $2 million athletic budget shortfall due to the coronavirus outbreak, and baseball was cut in hopes of saving other sports from a similar fate.
However, soon after the school’s announcement, a fundraising effort led by former BGSU players and donors brought in enough money to save a program that produced former Dodgers and Indians All-Star pitcher Orel Hershiser.
Bowling Green has said previously it costs $750,000 per year to run the baseball program.

Pac-12 schools have agreed to perform COVID-19 and coronavirus antibody tests on all athletes upon their return to campuses for voluntary workouts.
“These guidelines are coming from our medical advisory committee and it’s their belief this is best practice,” Commissioner Larry Scott told The Associated Press.
Scott said athletes will continue to be tested regularly for COVID-19 as long as they are under the supervision of the schools.
“I think it’s important to keep in mind our student-athletes come from all over. All over the United States and in some cases all over the world,” Scott said. “Return to campus and return to voluntary workouts I think factors that in.”
The Pac-12 schools are scheduled to begin allowing athletes back into their facilities for voluntary workouts starting June 15.

The Naismith Memorial Basketball Hall of Fame is considering new dates for the induction of its star-studded Class of 2020. Hall president John Doleva says dates to replace the postponed August ceremony include mid-October and next spring. With Kobe Bryant due to be enshrined posthumously, it’s certain to be a big event. Kevin Garnett and Tim Duncan also are members of the induction class. So is college coach Eddie Sutton, who died last month. The Hall in Springfield, Massachusetts, is also getting ready to unveil its completely renovated museum.

All 32 NFL teams have been told by Commissioner Roger Goodell to hold training camps at their home facilities this summer because of the COVID-19 pandemic.
Most NFL teams stay at their training complexes year-round, but Dallas, Pittsburgh, Kansas City and Buffalo are among those that stage training camp elsewhere.
The Cowboys and Steelers are scheduled for the Hall of Fame game in Canton, Ohio, on Aug. 6 and will be the first two teams to report in late July. Dallas usually trains in Oxnard, California, and Pittsburgh in nearby Latrobe, Pennsylvania.
Soon, the NFL is hopeful of having club complexes fully open, but under strict medical guidelines including social distancing protocols.

Two people familiar with the situation say the WNBA has decided to hold its games at just one location if there is a season this year and that the MGM Resorts in Las Vegas and the IMG Academy in Florida are the top candidates. There is still no date when the WNBA’s 2020 season will tip off. The people spoke to The Associated Press on condition of anonymity because the possible locations haven’t been publicly announced. WNBA Commissioner Cathy Engelbert told the AP last month that the league was considering a handful of scenarios, including playing at one or two sites.

The coronavirus pandemic has forced sports teams and their leagues to evaluate how they will welcome back fans. Social distancing is very likely whenever it happens. In Taiwan, a limited number of fans have been allowed into baseball games and told to sit three seats apart. U.S. colleges and pro leagues are assessing how to handle fans for fall sports, including football. Already Iowa State and Notre Dame are among schools planning for stadiums far less than full. Teams are also trying to figure out ways to prevent crowds entering or leaving, and limiting people on concourses.