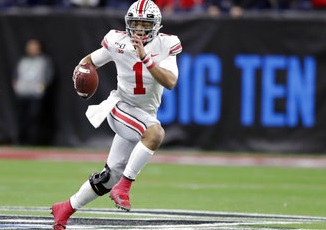 The Big Ten and Pac-12 conferences won’t play football, or any sport, this fall because of concerns about COVID-19. The decisions take two of college football’s five power conferences out of a crumbling season amid the pandemic. The Big Ten is postponing all fall sports and hopes to make them up in the second semester. The Pac-12 is pausing all sports until Jan. 1, including basketball. The Atlantic Coast Conference, Big 12 and Southeastern Conference are still moving forward with plans to conduct a football season.
The ACC, Big 12, and SEC are still moving forward with plans for a fall college football season. SEC Commissioner Greg Sankey says he is comfortable with the 14-member conference’s approach. The ACC says it will continue to follow advice of medical advisers and health officials. The Big 12 Board of Directors was meeting late Tuesday.

Baseball last night…
White Sox 8,  Tigers 4
Eloy Jimenez hit a three-run homer in the first inning, and the Chicago White Sox snapped Detroit’s four-game winning streak with an 8-4 victory over the Tigers. Edwin Encarnacion also went deep for the White Sox, who won for only the second time in seven games. Austin Romine hit a two-run shot for Detroit. Jose Abreu had three hits, including a pair of RBI doubles. Detroit’s Tyler Alexander allowed five runs in 3 2/3 innings in his first start of the season. His previous appearance was a memorable one — he struck out an American League record-tying nine straight hitters during a relief appearance Aug. 2 against Cincinnati.

Cubs 7,  Cleveland 1
Jon Lester pitched six strong innings and Jason Heyward hit a three-run homer, leading the Chicago Cubs to a 7-1 win over Cleveland. The Indians welcomed back manager Terry Francona after he missed eight games with a medical issue. Lester allowed one run and three hits as the Cubs, who hadn’t played in four days, moved to 11-3 for the first time since 2016. It was a rough day for the Indians. They put pitchers Mike Clevinger and Zach Plesac on the restricted list after they broke team rules and went out in Chicago, exposing themselves to COVID-19.

NHL Playoffs last night…
Vegas 4,  Blackhawks 1
Shea Theodore and William Carrier scored 2:17 apart midway through the second period, Robin Lehner made 19 saves against his former team, and the Vegas Golden Knights beat the Blackhawks 4-1 in Game 1 of their Stanley Cup playoffs first-round matchup. Reilly Smith scored twice in the third period as the top-seed in the Western Conference kept their scoring outburst from the round-robin seeding games going in the playoff opener. The Golden Knights scored 15 goals in the three seeding games and didn’t slow down against the Blackhawks. David Kampf scored short-handed for the Blackhawks. Game 2 is Thursday.

The Tigers put first baseman C.J. Cron on the 10-day injured list with a left knee sprain. Cron exited Monday night’s game against the White Sox in the fourth inning. He was hurt on a freak play in which a hard-hit ball by Danny Mendick bounced off him and was recovered by pitcher Daniel Norris, who retired Mendick with a diving tag.

The White Sox have reinstated shortstop Tim Anderson from the injured list and put infielder Leury Garcia on the IL with a sprained left thumb. Garcia appeared to be hurt after sliding into first in Monday night’s game at Detroit. He stayed in the game as a runner but was replaced defensively.

Houston Astros hitting coach Álex Cintrón faces a 20-game suspension and a fine for his role in a benches-clearing brawl at Oakland. That word comes from a person with direct knowledge of the punishment. In addition, the person said Athletics outfielder Ramon Laureano will receive a six-game suspension and a fine. Laureano was hit by a pitch from Humberto Castellanos with one out in the seventh inning of Oakland’s 7-2 victory Sunday. He began exchanging words with a gesturing Cintrón then left first base, threw down his batting helmet and began sprinting toward Cintrón.

Detroit Lions quarterback Matthew Stafford says he didn’t give much thought to opting out of this coming season, but he has been through a lot these past couple of years. His wife had surgery last year to remove a brain tumor. Then Stafford went through football-related injuries that halted his 2019 season. His status was momentarily uncertain again recently when he was put on the reserve/COVID-19 list Aug. 1. He was removed three days later, with the Lions saying it was a false positive. Stafford says that recent episode was a bit scary, but it was quickly resolved.

The Paris Marathon has been canceled because of the coronavirus after repeated attempts to find a new date. The race was originally due to take place in April but was then moved to October. Organizers say they’d recently tried to rearrange the race for November but continuing travel restrictions made it too hard for runners to travel, especially from abroad. They will now focus on the 2021 edition of the race. Runners who were registered for this year’s race will be automatically signed up for next year.