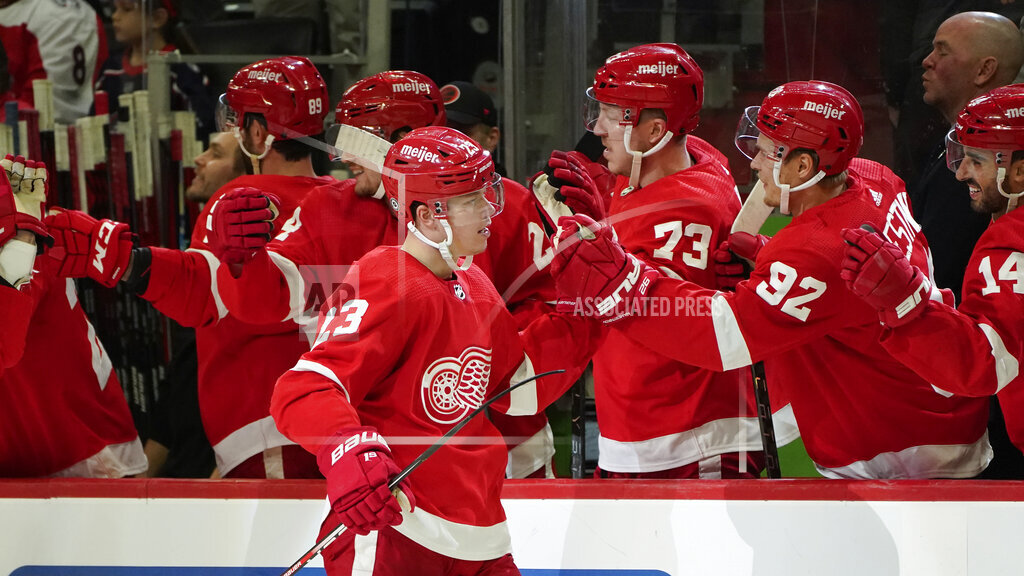 Red Wings 4, Blue Jackets 1 – Raymond scores 1st NHL goal, Red Wings top Blue Jackets 4-1
Lucas Raymond made his first NHL goal a big one for the Detroit Red Wings, breaking a scoreless tie at 6:38 of the third period on the way to a 4-1 victory over the Columbus Blue Jackets. The 19-year-old Raymond, from Gothenburg, Sweden, was picked fourth overall by the Red Wings in the 2020 draft. He also assisted on Tyler Bertuzzi’s fifth goal of the season just more than two minutes after beating goalie Joonas Korpisalo, who stopped Detroit’s first 33 shots on net. Boone Jenner made it a one-goal game at 12:51, but Red Wings goalie Thomas Greiss and his defense preserved the lead. Vladislav Namestnikov and Adam Erne added empty-net goals for Detroit.

Islanders 4, Blackhawks 1 – Sorokin stops 39, Islanders beat Blackhawks 4-1 for 1st win
Ilya Sorokin made 39 saves and Oliver Wahlstrom scored twice in the third period, helping the New York Islanders beat the Chicago Blackhawks 4-1 for their first victory of the season. Anthony Beauvillier and Cal Clutterbuck also scored as New York improved to 1-2-0 on its opening 13-game road trip. The Islanders don’t play their first home game at the new UBS Arena until Nov. 20. Chicago outplayed New York for long stretches in its home opener, but remained winless during a sluggish 0-3-1 start.

Dodgers 6, Braves 5 – Bellinger, Betts rally Dodgers, cut Braves’ NLCS lead to 2-1
Mookie Betts provided the tiebreaking single while the Los Angeles Dodgers erupted for four runs in the eighth inning to pull out a 6-5 victory over the Atlanta Braves. Cody Bellinger tied it with a three-run blast off losing pitcher Luke Jackson before the Dodgers pulled within 2-1 in the NL Championship Series. Corey Seager opened the scoring with a two-run homer for LA.

Astros 9, Red Sox 2 – Astros awaken for 7 in 9th, beat Boston 9-2 to tie ALCS 2-2
Jose Altuve hit a tying home run in the eighth inning and the Houston offense awakened with seven runs in the ninth on Tuesday night as the Astros came back to beat the Boston Red Sox 9-2. That tied the AL Championship Series at two games apiece. Six outs from falling behind 3-1 in the best-of-seven playoff and facing elimination in Game 5 at Fenway Park, the AL West champions instead guaranteed themselves at least one game back in Houston.

MLB – MLB qualifying offer price drops by $500,000 to $18.4M
The price of a qualifying offer to Major League Baseball free agents dropped by $500,000 to $18.4 million, a sign of the slide in salaries. The figure is determined by the average of the top 125 major league contracts this year and marks only the second fall. The price fell by $100,000 to $17.8 million in 2019, then rose to $18.9 million in 2020. Among the top players eligible for free agency following the World Series are Atlanta first baseman Freddie Freeman, Los Angeles Dodgers shortstop Corey Seager and Houston shortstop Carlos Correa.

WNBA – Chicago celebrates WNBA champion Sky with parade
Chicago turned out Tuesday for a parade celebrating the WNBA champion Sky, bringing a big smile to the city celebrating its first world championship since 2016. Fans lined Michigan Avenue to cheer on the Sky after they beat the Phoenix Mercury 80-74 Sunday at Wintrust Arena, becoming the first Chicago team to win a title since the Cubs five years ago. Naperville native Candace Parker and said she remembered growing up watching the Chicago Bulls and “dreaming of being and bringing a title to your hometown.”

Bucks 127, Nets 104 – Bucks begin title defense with 127-104 victory over Nets
The Milwaukee Bucks raised their NBA championship banner on Tuesday before blowing out the team predicted to win it all this season. Giannis Antetokounmpo poured in 32 points and the Bucks opened the defense of their first title in half a century by beating the Nets, 127-104. Antetokounmpo also had 14 rebounds and seven assists in a rematch of the Bucks’ Eastern Conference quarterfinal series win.

Warriors 121, Lakers 114 – Curry, Warriors stun James, Lakers 121-114 in opener
Stephen Curry had a triple-double and the Golden State Warriors rallied from 10 points down to beat the Lakers in Los Angeles, 121-114. Curry had 21 points, 10 boards and 10 assists for Golden State, which trailed 84-74 late in the third quarter. LeBron James had 34 points and 11 rebounds for Los Angeles, while Anthony Davis chipped in 30 points and 11 boards.

NBA – Pistons rule out Cade Cunningham for opener against Bulls
Detroit Pistons guard Cade Cunningham has been ruled out of the team’s season-opening game against the Chicago Bulls due to a sprained right ankle. Detroit will host the Bulls on Wednesday night without Cunningham, the No. 1 overall pick in the NBA draft. Cunningham hurt his ankle early in training camp and did not play in the preseason. Detroit is counting on the 6-foot-8 guard to help restore success. The Pistons have earned a spot in the playoffs just twice since 2009, when they ended an eight-year playoff run that included their third NBA championship.

NFL – Bears put Quinn on COVID-19 list with Brady, Bucs coming up
The Chicago Bears have placed linebacker Robert Quinn on the reserve/COVID-19 list, possibly leaving them without one of their top pass rushers when they visit Tom Brady and the defending Super Bowl champion Tampa Bay Buccaneers. The resurgent Quinn is second on the team to Khalil Mack with 5 1/2 sacks. The two-time Pro Bowl pick had two last season — his first in Chicago. The Bears are tied with Minnesota for the league lead with 21 sacks. Chicago also placed defensive back Deon Bush on injured reserve with a quad injury.

FIFA – Morgan says investment must coincide with World Cup plan
U.S. soccer star Alex Morgan says increased investment in the women’s game must be part of any plan for a biennial World Cup. Morgan is part of a FIFA technical advisory group that is looking into a proposal to stage the World Cup every two years. Morgan is open to the plan, but did not outright endorse it while speaking to reporters ahead of the U.S. team’s match against South Korea in Kansas City, Kansas.