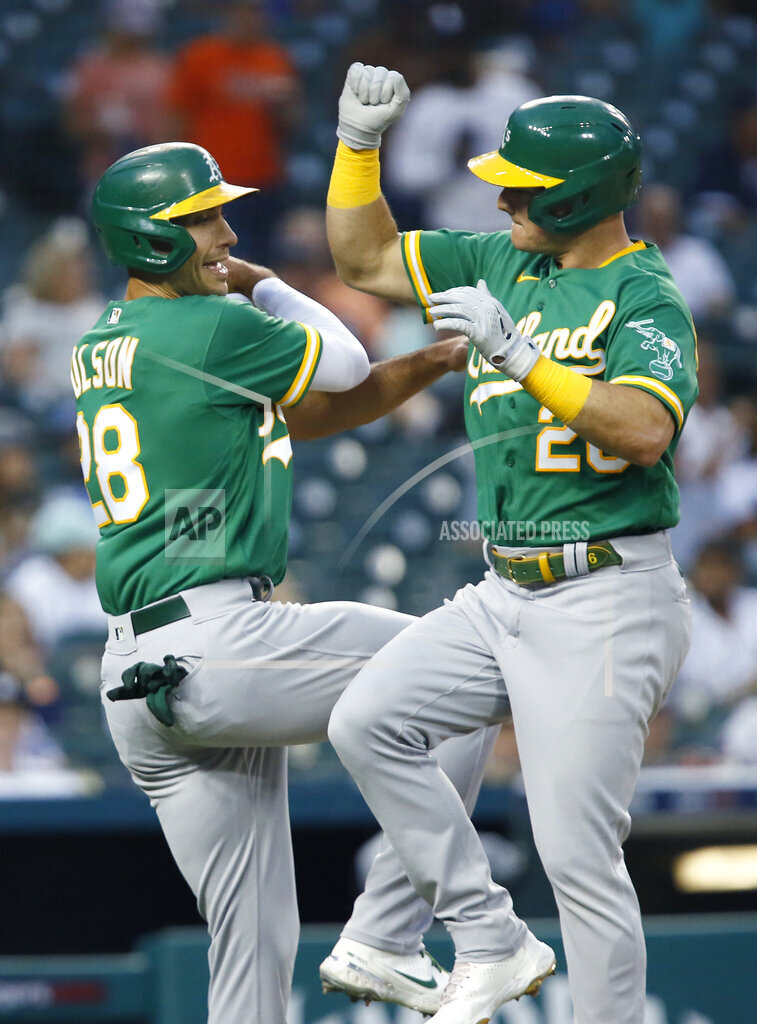 White Sox 4, Pirates 2 – Grandal, Abreu power White Sox to 4-2 win over Pirates
Yasmani Grandal and Jose Abreu homered, and five relievers combined for 4 2/3 innings of two-hit ball as the Chicago White Sox beat the Pittsburgh Pirates 4-2 on Tuesday night. The Sox hold a 10-game lead in the AL Central and won for the fourth time in five games. The Pirates lost for the fourth time in six games. Michael Kopech (4-2) picked up the win. Bryse Wilson (2-6) took the loss.

Cubs 3, Twins 1 – Schwindel, Happ homer; Cubs hold on to beat Twins 3-1
Frank Schwindel homered for the second straight game, Ian Happ added a towering homer into the third deck, and the Chicago Cubs beat the Minnesota Twins 3-1. Manuel Rodríguez (3-2) earned the win for Chicago with two scoreless innings of relief. Rowan Wick earned his first save of the season. Cubs second baseman Matt Duffy ended a threat for Minnesota in the eighth when he tracked down Max Kepler’s pop-up into medium right field, spun and threw Luis Arraez out at the plate trying to score from third. John Gant (4-9) pitched five innings and allowed two runs for Minnesota.

NFL – Pats cut Newton, clearing way for Jones to start
The New England Patriots have shown Cam Newton the door after just one season with the team. The Pats have released the 2015 NFL most valuable player, paving the way for rookie Mac Jones to open the season as the starting quarterback. Veteran players say Jones has impressed them in training camp with his work ethic. Jones won a national title last year at Alabama. The Patriots are trying to rebound from a disjointed 2020 season. Newton finished 7-8 as the starter and the Patriots went 7-9 overall after Tom Brady’s departure.

NFL – AP Exclusive: Bills propose 60,000-seat stadium by 2027
A person with direct knowledge of the details tells The Associated Press the the Buffalo Bills’ proposed new stadium would include about 60,000 seats and be built by 2027.  The $1.4 billion venue would not include a roof but a majority of the seats would be protected from the elements. The Bills are in discusions with county and state officials about the new stadium. At issue is how quickly a deal can be approved, and how the construction costs would be split between the team and taxpayers. The team’s current stadium was built in 1973.

NFL – Payton: Saints planning up to a month away from New Orleans
New Orleans Saints coach Sean Payton says the team is investigating the possibility of remaining in the Dallas area for up to a month and opening its regular season against Green Bay in the Cowboys’ home stadium. The Superdome appears to have been spared significant damage from Hurricane Ida. But there are logistical challenges with staffing an NFL game at the dome in the near future because of the widespread damage in the New Orleans area. Payton says the TCU and SMU football programs have reached out with offers of their facilities to the Saints.

Fever 74, Sparks 72 – Mitchell, McCowan help Fever beat Sparks 74-72
Kelsey Mitchell scored 25 points, Teaira McCowan added 15 — including two free throws to cap the scoring with 15.3 seconds to play — and tied her career high with 19 rebounds and the Indiana Fever beat the Los Angeles Sparks 74-72.  Indiana (6-19) closed the game on a 10-0 run. Mitchell hit a long jumper and, after McCowan made 3 of 4 from the free-throw line, a 3-pointer — her fourth of the game to make it 72-all with 1:19 remaining. The teams traded misses before Jessica Breland stole the ball from Nneka Ogwumike to set up McCowan’s go-ahead free throws. L.A.’s Brittney Sykes missed two free throws and a jumper in the final 1.3 seconds. Ogwumike finished with 17 points and five assists.

NCAA – Judge blocks Western Michigan’s vaccine mandate for athletes
A judge has blocked Western Michigan University from enforcing a COVID-19 vaccine requirement against four female soccer players who sued, ruling they are likely to prevail on claims it violates their religious rights. U.S. District Judge Paul Maloney in Grand Rapids issued the temporary restraining order Tuesday, the school’s deadline for athletes to get an initial shot or be unable to compete. In a separate case, he denied a request to block Michigan State University’s broader vaccine mandate for students and employees. An employee who had COVID-19 last year said she should not have to be vaccinated.

NCAAFB – Revamped Florida State D-Line will be tested by Notre Dame
Florida State is banking on improvement production from the Seminoles after spending the last nine months patching up holes at quarterback, on the offensive line, in the secondary and along the defensive line. Coach Mike Norvell believes that production and leadership will come from a group of nine newcomers who transferred and are part of the Seminoles’ two-deep depth chart. He and his staff are days away from seeing how much improvement they’ve made when Florida State plays No. 9 Notre Dame on Sunday night. Defensive coordinator Adam Fuller is particularly optimistic about the revamped D-line, expecting the changes to provide a jolt to the pass rush as well as one of the nation’s worst run defenses in 2020.

NCAAFB – Michigan State leaves Northwestern guessing as it prepares
Michigan State coach Mel Tucker won’t say who is starting at quarterback Friday night at Northwestern. He has no interest in helping the Wildcats prepare for the season-opening game. Tucker’s choices are former Temple quarterback Anthony Russo and redshirt sophomore Payton Thorne. Russo has 31 games f experience over three seasons with the Owls. Thorn has the benefit of playing in four games for the Spartans in Tucker’s first season.

NCAAFB – Big Ten wastes no time getting down to business with openers
The Big Ten is jumping right in to conference play this football season. Four conference games are on the schedule in Week 1. A fifth was played in Week Zero. This week’s Big Ten openers have No. 4 Ohio State at Minnesota on Thursday, Michigan State at Northwestern on Friday, and No. 17 Indiana at No. 18 Iowa and No. 19 Penn State at No. 12 Wisconsin on Saturday. Illinois beat Nebraska 30-22 last week. It was not unusual for Big Ten teams to open against conference opponents into the 1980s.

NHL – Blackhawks D Murphy agrees to 4-year contract extension
The Chicago Blackhawks have agreed to a four-year contract extension with defenseman Connor Murphy. The deal runs through the 2025-26 season and carries a $4.4 million salary-cap hit. The 28-year-old Murphy has turned into one of Chicago’s most reliable defensemen. He had three goals and 12 assists while averaging a career-high 22:09 of ice time over 50 games last season.

Tennis – US Open – Barty advances
Women’s top-ranked Ash Barty has reached the second round of the U.S.Open. Barty knocked off Vera Zvonareva, 6-1, 7-6 in her first U.S. Open match in two years. The 25-year-old Barty finished with 31 winners, including 11 aces. Barty skipped last year’s Open because of the pandemic. The first major upset of the tournament was crafted by Maxime Cressy, who dispatched ninth seed Pablo Carreno Busta, 5-7, 4-6, 6-1, 6-4, 7-6. Cressy saved four match points in the fifth-set tiebreaker to knock off the two-time U.S. Open semifinalist.

IIHF – Poulin scores in OT, Canada wins 1st world title since 2012
Marie-Philip Poulin scored in overtime and Canada beat the five-time defending champion United States 3-2 for its first gold medal at the women’s hockey world championship since 2012. Poulin, the Canadian captain, skated down the left side, took a pass from Brianne Jenner and sent it off the crossbar and post before going in. Play continued in the sudden death 3-on-3 overtime until the buzzer sounded after a video review. Canada fell behind 2-0 in the first period — for just its second deficit in the tournament. But the Canadians scored two goals, 2:29 apart, in the second to tie it.

USA Gymnastics – USA Gymnastics eyes $425 million settlement with survivors
USA Gymnastics could be near the final stages of the legal fallout of the Larry Nassar sexual abuse scandal. The organization and hundreds of women who claim they were abused by the former national team doctor or others affiliated with the national governing body have filed a joint $425 million settlement proposal in U.S. Bankruptcy Court. The proposal was put together by the USA Gymnastics and the Survivors Committee. It still needs to be approved by the survivors and any other creditors. A confirmation hearing is scheduled for Dec. 8-9.

HSFB – The big gridiron loss, on TV, was real — but is the school?
After a shellacking in a game televised on ESPN revealed an Ohio prep football team wasn’t the top-tier talent it purported to be, the legitimacy of the school itself is in question. Gov. Mike DeWine says he’s asked Ohio’s Department of Education to investigate whether Bishop Sycamore complies with minimum standards under Ohio law. He says its 58-0 loss to Florida powerhouse IMG Academy on Sunday in Canton raised concerns about player safety as well as school operations. Observers wondered how it ended up in the game in the first place. The marketing group that scheduled the matchup says it was “misled” and should’ve had more thorough vetting.