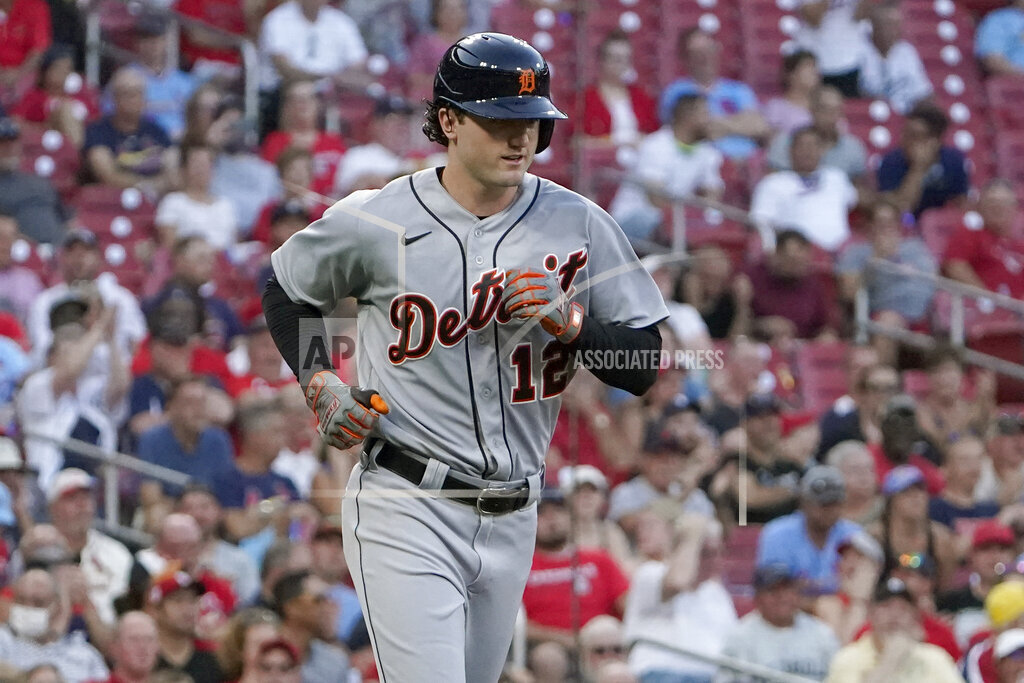 Tigers 4, Cardinals 3 – Cabrera hits No. 501 in Tigers’ 4-3 win over Cardinals
Miguel Cabrera and Robbie Grossman hit back-to-back home runs to lead the Detroit Tigers to a 4-3 interleague victory over the St. Louis Cardinals. Two days after hitting his 500th homer, Cabrera connected on No. 501. He crushed a 79-mph slider by starter Jack Flaherty into Big Mac Land, which is name of the upper left field deck, in the third inning. At 423 feet, it was his second longest home run this season. The Cardinals immediately removed starter Jack Flaherty (9-2) with what the team said was right shoulder tightness. Casey Mize (7-6) pitched five scoreless innings. He checked the Cardinals on three hits.

Rockies at Cubs, PPD – Rockies-Cubs game postponed; doubleheader set for Wednesday
Tuesday night’s game between the Colorado Rockies and Chicago Cubs was postponed because of thunderstorms and rescheduled as part of a doubleheader Wednesday. Storms rolled into Wrigley Field about 90 minutes before the scheduled first pitch. The rain was torrential at times, and the area was placed under a severe thunderstorm watch and a flash flood warning. Zach Davies was penciled in to start for Chicago in the first game of the twinbill against Germán Márquez. Game 2 will feature the Cubs’ Justin Steele and Colorado’s Austin Gomber.

NFL – Bears to start Fields in preseason finale, Dalton in Week 1
The Chicago Bears will start rookie quarterback Justin Fields in the preseason finale Saturday at Tennessee against the Titans. Although Fields is starting that game, he still is regarded as the Bears’ backup to veteran Andy Dalton for the regular-season opener against the Los Angeles Rams. Bears coach Matt Nagy says Fields’ next playing time would be determined largely by how Dalton performs in the regular season. Fields was drafted 11th overall after the Bears traded up in the first round to take the Ohio State star. In the preseason he has rushed for 79 yards while passing for 222 yards on 23 of 39 throws with one touchdown.

NFL – Jaguars RB Etienne out for season with left foot injury
Travis Etienne’s rookie season is over before it begins. The Jacksonville Jaguars’ rookie running back suffered a left foot injury during Monday’s preseason loss at New Orleans. The first-round draft pick from Clemson is expected to have surgery as soon as possible. Losing Etienne is a significant setback for the Jaguars, who planned to use him to create mismatches in the slot and as a third-down back. Jacksonville selected Etienne with the 25th overall pick in April’s draft and paired him with fellow Clemson star Trevor Lawrence.

Sky 86, Dream 79 – Quigley, Parker lead Sky past Dream 86-79
Allie Quigley scored 21 points and Candace Parker added 18 to help the Chicago Sky beat the Atlanta Dream 86-79. Quigley was 8 of 11 from the field, including making all three of her 3-point attempts. The Sky shot 51.5%. Odyssey Sims had 17 points to lead Atlanta.

NCAA – ACC, Big Ten, Pac-12 ally to ‘protect the collegiate model’
The Big Ten, Atlantic Coast Conference, and Pac-12 are forming an alliance to work together on the future of college athletics and scheduling. Conference officials have been discussing the idea for weeks. The move comes less than a month after the Southeastern Conference invited Texas and Oklahoma to join and create a 16-school league by 2025. The move sent shockwaves through college athletics. The ACC, Big Ten and Pac-12 hope an alliance of 41 schools that span from Miami to Seattle leads to stability at the top of big-time college sports.

NCAA – Will athletes’ new college cash flow impact team chemistry?
College athletes have been able to cash in on their celebrity since July 1. Some worry what effect the money might have on team chemistry.  UConn women’s basketball coach Geno Auriemma supports the change. He also says fans should not be surprised when some athletes transfer because they are not making the same endorsement money as some of their teammates. Diversity experts are also watching to see if race and gender biases play a role in which athletes reach deals.