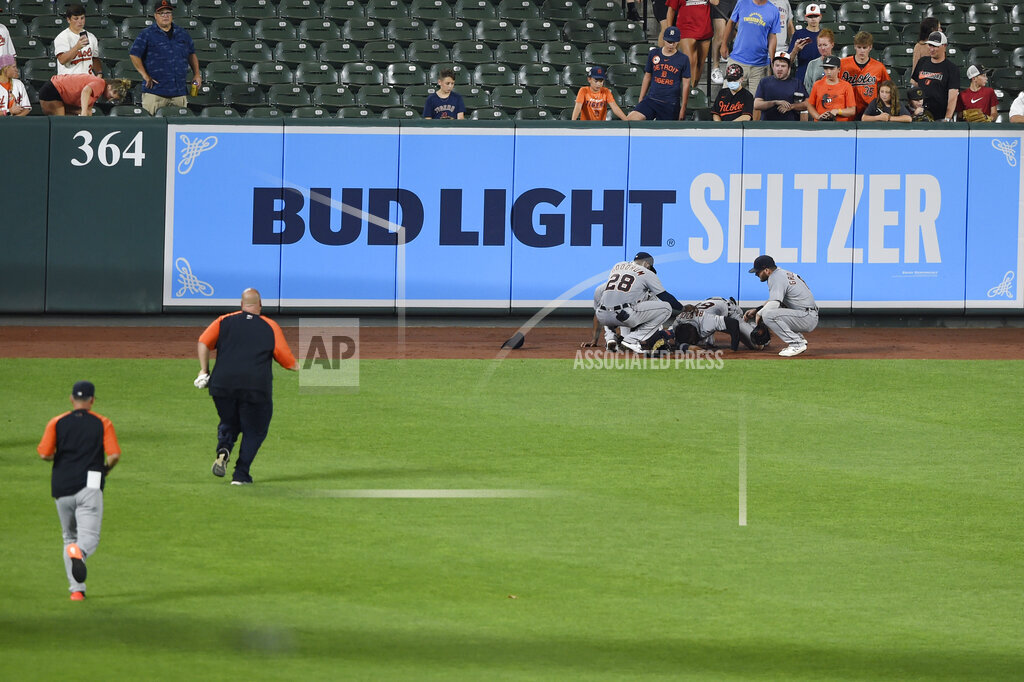 Tigers 9, Orioles 4 – Tigers beat Orioles 9-4 despite scary collision in outfield
Willi Castro doubled, tripled and drove in three runs, and Detroit beat the Baltimore Orioles 9-4 in a game that included a scary collision between two Tigers outfielders. Center fielder Derek Hill and left fielder Akil Baddoo were shaken up after running into each other while chasing Anthony Santander’s eighth-inning fly ball. Hill did make the catch, and although they both left the game, the two players were able to walk off the field after a bit of a delay. Miguel Cabrera singled and walked and remained two home runs shy of 500. The Orioles have lost six straight games, and they’ve allowed at least nine runs in all of them.

Brewers 4, Cubs 2 – Brewers 6, Cubs 3 – Brewers score 6 in 5th, beat Cubs 6-3 for DH sweep
Luis Urías had two hits during a six-run, fifth-inning rally as the Milwaukee Brewers beat the Chicago Cubs 6-3 Tuesday night to complete a doubleheader sweep. The nightcap was delayed for an hour, 29 minutes because of rain with one out in the top of the third, which limited starter Aaron Ashby to two scoreless innings. The Brewers then used six pitchers to complete the final five innings. Miguel Sanchez threw one pitch to get the final out in the fourth inning for the win. The NL Central leaders are a major league-best 36-19 on the road. Patrick Wisdom homered for Chicago, which has dropped six straight. In the opener, Freddy Peralta pitched effectively into the sixth inning and Avisail García smacked a go-ahead two-run homer in Milwaukee’s 4-2 win.

Twins 4, White Sox 3 – Astudillo sparks Twins in 4-3 win as Sox streak ends at 4
Willians Astudillo hit a go-ahead, two-run homer in the sixth inning and the Minnesota Twins held on for a 4-3 victory to stop a four-game winning streak for the Chicago White Sox. Rookie pitcher Griffin Jax gave the Twins a career-high six innings. He fell behind 3-2 on consecutive homers by Adam Engel and José Abreu in the third. Jax is the first Air Force Academy graduate to reach the major leagues. He struck out a career-best 10 with one walk. White Sox starter Dallas Keuchel gave up four runs in six innings. He walked four, and three scored.

NHL – Blackhawks Hall of Fame goaltender Tony Esposito dies at 78
Tony Esposito, a Hall of Fame goaltender who played almost his entire 16-year career with the Chicago Blackhawks, has died following a brief battle with pancreatic cancer. He was 78. Esposito debuted with Montreal during the 1968-69 season and appeared in 13 games. He was then taken by the Blackhawks in an intraleague draft, quickly emerging as one of the league’s best goalies. He won the Calder Trophy in 1970 as the NHL’s best rookie as well as the Vezina Trophy given to the top goaltender. He also won the Vezina in 1972 and 1974.

NHL – Red Wings agree to 3-year deal with Jakub Vrana
The Detroit Red Wings and winger Jakub Vrana have agreed to a three-year contract worth $5.25 million per season. He had 11 points in 11 games last season with the Red Wings after they acquired him just before the NHL trade deadline. The Washington Capitals sent Vrana, Richard Panik, 2021 first- and 2022 second-round pick to Detroit for Anthony Mantha. Vrana had 36 points in 50 games last season. He had 84 career goals and 168 assists over five seasons.  The two sides were set to go to arbitration.

NFL – Lions’ Cabinda getting comfortable back in the backfield
Jason Cabinda knows how to make a position transition. The Detroit Lions fullback was a middle linebacker at Penn State but never played defense as a star tailback at Hunterdon Central Regional in Flemington, New Jersey. Cabinda made the Oakland Raiders as an undrafted rookie in 2018 and contributed 21 tackles. However, he was cut the next year in a meeting that aired on HBO’s “Hard Knocks” before quickly signing to Detroit’s practice squad. He was activated by the Lions late in 2019, getting into one game at fullback. Cabinda played sparingly at fullback in 2020, but showed enough for new Lions coach Dan Campbell to quickly take notice.

NFL – Eddie Jackson, Elijah Wilkinson make timely return to Bears
Injuries have hit the Chicago Bears hard throughout the early part of training camp, but as they begin the third week of practices getting starting safety Eddie Jackson and tackle Elijah Wilkinson indicates the two could be regaining their health in time for Saturday’s first preseason game, against Miami. Rookie quarterback Justin Fields and veteran Andy Dalton are expected to make their Bears debuts.

NFL – Rodgers unlikely to play in any of Packers’ preseason games
MVP quarterback Aaron Rodgers probably won’t appear in any of Green Bay’s three preseason games as the Packers look to get 2020 first-round draft pick Jordan Love as much work as possible. Packers coach Matt LaFleur said Love will play the majority of the Packers’ preseason opener Saturday against the Houston Texans and that Kurt Benkert also would get some snaps. LaFleur said Rodgers will “most likely not” play in any preseason games. The Packers want to get Love some game experience after the pandemic wiped out last year’s preseason.

NCAA – Valparaiso U announces Beacons as school’s new team name
Valparaiso University has adopted the Beacons as its new team name, replacing the Crusaders, a term school officials dropped this year after saying it had been embraced by hate groups. The university’s President José D. Padilla announced Tuesday that the private Lutheran school’s new nickname “directly connects to the University’s motto, ‘In Thy Light We See Light,’ and represents the Valparaiso University community in many ways.” School officials announced in February that they had retired the Crusaders. That decision came after a debate recently intensified because groups such as the Ku Klux Klan began using the words and symbols of the Crusades, the bloody religious wars between Christians and Muslims.

NCAA – Appeals panel revives North Dakota women’s hockey lawsuit
An effort by 11 former University of North Dakota women’s hockey players to bring back the program that was dropped in 2017 has gotten a reprieve. The 8th U.S. Circuit Court of Appeals revived the players’ lawsuit on Tuesday. The original complaint alleged that when the school dropped hockey, it violated Title IX laws that prohibit women from being treated differently because of gender. But a federal judge said the lawsuit did not show a “substantial disproportionality” between men’s and women’s athletic opportunities. The players appealed in October and a three-judge panel ruled that the athletes may be able to state an actionable Title IX claim.
NCAAFB – Alabama preseason No. 1 in coaches poll, followed by Clemson
Defending national champion Alabama is preseason No. 1 in the USA Today coaches poll. Clemson is No. 2 and Oklahoma, Ohio State and Georgia round out the top five. The Crimson Tide got 63 of the 65 first-place votes while the Sooners got the other two. No. 8 Iowa State has its highest preseason ranking since USA Today started administering the coaches poll in 1991. So does No. 10 Cincinnati. The Associated Press Top 25 will be released on Aug. 16.

NCAAFB – Virginia Union player dies after collapsing in practice
Virginia Union University says a freshman football player died after collapsing during practice over the weekend. In a letter to students and staff Monday, the university’s president said Quandarius Wilburn collapsed Sunday during a conditioning session. News outlets report that the letter says the 19-year-old defensive end from Wadley, Georgia, was taken to VCU Medical Center, where he died. University President Hakim Lucas called Wilburn’s death “a heartbreaking loss for our campus community." The school says it is ready to support families and students "to process this devastating loss.”

Coaches charged with murder in heat death of Georgia student
A grand jury has charged two coaches with murder and child cruelty in the death of a Georgia high school basketball player who suffered a heat stroke after practicing outdoors in nearly 100-degree weather. Court records indicate the Atlanta-area grand jury indicted Larosa Walker-Asekere and Dwight Palmer last month. Sixteen-year-old Imani Bell was a junior at Elite Scholars Academy in Clayton County. She was participating in required conditioning drills for the girls’ basketball team in August 2019 when she collapsed after running up the football stadium steps. She died later that day of heat-related cardiac arrest and kidney failure. Court records don’t list an attorney for either defendant.

Olympics – In rough Olympics, viewers perked up a bit in second week
In what was otherwise a rough two weeks in Tokyo for NBC Universal, viewers perked up a bit in the second week of the games when the U.S. team’s performance did the same. NBC’s viewership during the second week was down 46% compared to the second week in the Rio de Janeiro Games in 2016. The first week, NBC was down 52%. Overall, prime time Olympics viewership when NBC, cable networks and streaming is figured in averaged 15.6 million people in Tokyo. The Nielsen company said that was down 42% compared to Rio.

Soccer – Messi arrives in Paris, his new soccer home
Soccer star Lionel Messi has finalized agreement on his Paris Saint-Germain contract and arrived in the French capital to complete the move that confirms the end of a career-long association with Barcelona. Dozens of PSG fans gathered at Le Bourget Airport to welcome Messi, who was wearing a T-shirt that said — in French — “Here is Paris.”  A person with knowledge of the negotiations told The Associated Press the 34-year-old Argentina star has agreed a two-year contract with the option for a further season. Messi’s father and agent Jorge also confirmed his son was moving to PSG in a brief exchange with reporters at Josep Tarradellas Barcelona-El Prat Airport.