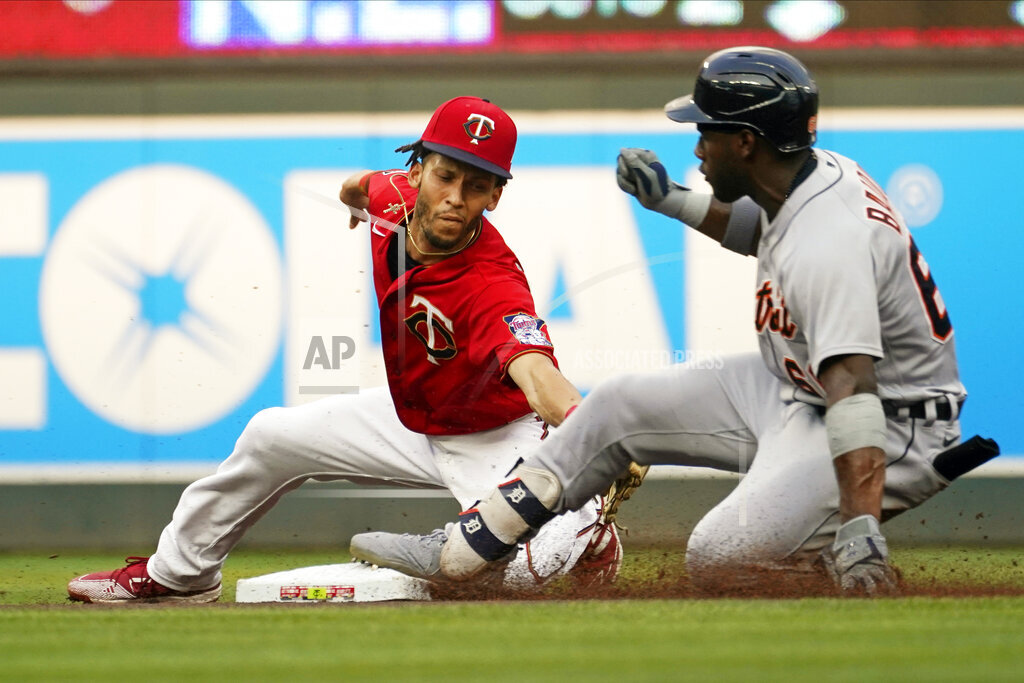 Tigers 6, Twins 5 – F/11 – Cabrera, Haase power Tigers past Twins 6-5 in 11th innings
Miguel Cabrera hit a run-scoring single in the 11th inning after Eric Haase tied the game with a grand slam in the top of the ninth as the Detroit Tigers beat the Minnesota Twins 6-5. Cabrera’s hit scored automatic runner Jonathan Schoop. The Tigers tied the game with a homer in the ninth inning for the second straight game. Robbie Grossman, who singled to start the ninth-inning comeback, hit a two-run homer on Monday night before Minnesota won 6-5 in 10 innings. Mitch Garver hit a first-inning grand slam for the Twins.

White Sox 5, Royals 3 – Jiménez hits 3-run HR, rallies White Sox past Royals 5-3
Eloy Jiménez logged his first big hit of the season, launching a go-ahead, three-run homer in the eighth inning that sent the Chicago White Sox over the Kansas City Royals 5-3. The 24-year-old slugger, who was the 2019 AL Rookie of the Year and then kept up his power surge during the pandemic-shortened season, tore a pectoral muscle in spring training. He hadn’t played in the majors until going 0 for 4 Monday night. But Jiménez quickly made up for lost time in his second game. After hitting a single in his first at-bat, he came up in the eighth after a two-out intentional walk to Jose Abreu with Chicago trailing 3-2. Jiménez connected for a 459-foot drive to cap a four-run rally for the AL Central leaders.

Reds 7, Cubs 4 – Votto hits 2 more homers as Reds roll past Cubs 7-4
Joey Votto continued his power surge with two home runs and started a dazzling double play as the Cincinnati Reds pulled away to a 7-4 victory over the Chicago Cubs. Votto has homered in a career-high four consecutive games for the second time, one game shy of the team record. The Reds hit four home runs in winning for the third time in five games. The Cubs lost for the sixth time in their last 10. Cincinnati rookie Vladimir Gutierrez pitched 6 1/3 innings of five-hit ball to earn the win. Cubs starter Adbert Alzolay allowed three home runs in five innings.

NHL – Vegas trades Fleury to Chicago as goalie carousel spins, get Johnson from champs
The Vegas Golden Knights have traded reigning Vezina Trophy-winning goaltender Marc-Andre Fleury to the Chicago Blackhawks. Vegas got minor leaguer Mikael Hakkarainen in return, indicating the move was a salary dump. Fleury counts $7 million against the salary cap next season. Chicago was not on the 36-year-old’s 10-team no-trade list. Agent Allan Walsh says Fleury will be taking time to talk to his family and evaluate his hockey future.  Chicago wasn’t done there, the Blackhawks also acquired forward Tyler Johnson from the Stanley Cup Champion Tampa Bay Lightning in exchange for the contract of injured Blackhawks defenseman Brent Seabrook.  The move by Tampa takes Johnson $5-million contract off the salary cap. Seabrook announced his retirement during the past season citing injury, he is listed on long term injured reserve and his contract does not count in the salary cap calculations.  Seabrook had 3 years left on his contract and will make $6.875 million each year.   The trade also sent a 2023 second round pick from Tampa Bay to Chicago.

NCAAFB – Big 12′s Texas, Oklahoma make request to join powerhouse SEC
Texas and Oklahoma have made a request to join the powerhouse Southeastern Conference. A day after the Big 12 schools notified the league that they would not be extending an agreement that binds conference members to 2025, the schools publicly stated for the first time they want to join the SEC.  SEC Commissioner Greg Sankey says his league will consider the request in the “near future.”  The SEC would grow to 16 teams with the additions of Texas and Oklahoma, half of which have won at least one national championship in football since 1980.
NFL – Bears’ QB balancing act begins with training camp
The balancing act for Matt Nagy has begun. The Chicago Bears coach made it clear as players reported Tuesday for training camp why the team is starting veteran quarterback Andy Dalton first before it turns to rookie first-round pick Justin Fields. The season amounts to weighing how much Dalton can win against the potential problems associated with starting a developing rookie like Fields. Nagy realizes the excitement building throughout Chicago to see Fields play, but for training camp, preseason and at least the first game, the Bears know Dalton is the starter.

NFL – Rodgers arrives in Green Bay for start of training camp
Aaron Rodgers has made it to Green Bay on the eve of the Packers’ first training-camp workout. Rodgers was seen arriving at Lambeau Field on Tuesday morning, the day after NFL Network and ESPN had reported the reigning MVP was closing in on a deal that would keep him with the Packers this season. The Packers open training camp Wednesday. Rodgers hadn’t participated in organized team activities this spring and skipped the Packers’ mandatory minicamp. His return makes the Packers legitimate Super Bowl contenders.

NFL – Rivera opens Washington camp frustrated by vaccine hesitancy
Ron Rivera opened Washington’s training camp expressing frustration about a lack of vaccinations among players. Rivera says he believes Washington is now over 50% of players fully vaccinated. Only five NFL teams are at less than 70% of players who have either received one vaccination shot or both. The low vaccination rate is one of many questions facing Washington going into camp. It has caused Rivera to wear a mask around unvaccinated players because he says he is immune deficient. Rivera was treated for a form of skin cancer last year. Offensive tackle Cornelius Lucas was placed on the NFL’s COVID-19 reserve list Tuesday.

NBA – The play-in tournament officially returning to NBA in 2022
The NBA’s play-in tournament is back for at least one more season. As expected, the league’s board of governors gave approval Tuesday to the plan that would bring back the event in April 2022. The format will be the same as it was this past season: the teams that finish seventh, eighth, ninth and 10th in each conference will play to determine the No. 7 and No. 8 playoff seeds. NBA Commissioner Adam Silver had said on multiple occasions in recent weeks that he expected the play-in to return. It was utilized this past season for the first time on an experimental basis.

NBA – Former President Obama buys stake in NBA’s Africa business
Former U.S. President Barack Obama has bought a stake in the NBA’s Africa business through his foundation. The NBA says Obama will have a minority equity stake in NBA Africa, a new entity set up this year to run all the league’s business on the continent. The NBA adds Obama will use any profits to fund the Obama Foundation’s youth and leadership programs in Africa. Obama has been linked to the NBA’s Africa operations since 2019 but it wasn’t clear until Tuesday’s announcement exactly what his involvement would be. NBA Africa and world body FIBA have combined to set up the first pro basketball league in Africa. It held its inaugural season in May.

HSFB – Georgia 15-year-old collapses, dies after football practice
A 15-year-old high school football player died after collapsing at the first day of practice amid 97-degree temperatures in middle Georgia.  Bibb County school district officials say Joshua Ivory of Macon’s Southwest High School went into distress Monday, leading coaches to call an ambulance. He later died at a hospital. No cause of death has been announced and an autopsy is planned.

Volleyball – US beats Tunisia 3-1 in men’s volleyball
The U.S. men’s volleyball team has improved to 2-1 in pool play at the Olympics by beating Tunisia 3-1.  The Americans bounced back from a loss to the Russians on Wednesday. They knocked off the lowest-ranked team in their group 25-14, 23-25, 25-14, 25-23.  The victory keeps the U.S. in good position to advance to the quarterfinals as one of the top four teams in Pool B. Tunisia has lost all three matches so far in Tokyo.

Beach Volleyball – US men, women both win in beach volleyball prelims
Americans April Ross and Alix Klineman have guaranteed themselves at least one more beach volleyball match at the Tokyo Olympics. U.S. men Phil Dalhausser and Nick Lucena helped their chances of making the knockout round as well. The U.S. women beat Spain 21-13, 21-16 for their second straight win. They can do no worse than a three-way tie for first. Dalhausser and Lucena improved to 1-1 in the round robin by beating Brazil’s Alison, the reigning gold medalist, and Alvaro Filho, 24-22, 19-21, 15-13. The Americans will meet Argentina on Thursday.

Gymnastics – Russian team topples American powerhouse with Biles out
Though the history books may mark Tuesday’s victory with an asterisk due to American star Simone Biles’ early withdrawal, the Russian women’s gymnastics team’s dazzling performance is the result of a concerted transformation since they finished a distant second to the American team at the 2019 World Championship. They beat the Americans by nearly 3.5 points, a significant margin in the sport. Their victory came just a day after the Russian men also won. The country swept the gymnastics team gold medals, among the most coveted at the summer Games.  Biles has also withdrawn from the individual all-around competition.

Swimming – "Just proud": Ledecky finally wins gold at Tokyo Olympics
Finally, a gold medal in Tokyo for Katie Ledecky. The American star bounced back from the worst finish of her brilliant Olympic career to take the first-ever gold medal in the women’s 1,500-meter freestyle. It wasn’t quite the breeze everyone expected in the metric mile. Ledecky built a big lead right from the start, then worked hard to hold off American teammate Erica Sullivan’s blazing finish. But it was Ledecky touching first in 15 minutes, 37.39 seconds. Sullivan claimed the silver, while the bronze went to Germany’s Sarah Kohler. Ledecky bounced back from a fifth-place showing in the 200 free.

Softball – Japan beats US 2-0, turns incredible DP to win softball gold
Japan won its second straight Olympic softball gold medal, beating the United States 2-0 in an emotional repeat of their 2008 victory in Beijing that again left the Americans in tears. Yukiko Ueno took a one-hitter into the sixth inning five days after her 39th birthday, and Japan snuffed out an American rally attempt with an acrobatic double play in the sixth inning. Mana Atsumi, the No. 9 batter, had a run-scoring infield hit in the fourth inning and Yamato Fujita lined an RBI single off Abbott in the fifth. Softball will not return to the Olympics until at least 2028.

NBC’s Tokyo Olympics viewership gets off to rough start
NBC Universal is still waiting to see if there will be a surge of interest in viewership for the Tokyo Summer Olympics. During each of the first three nights of coverage, viewership was down more than 30 percent compared to corresponding nights at the Rio de Janeiro Games in 2016. NBC’s audience this year was its largest on Sunday night, but that still represented a 43 percent drop from five years ago. Viewing habits for live television have changed dramatically in the past five years, so it’s difficult to determine how much NBC’s Olympics slump has to do with that, and how much with the underwhelming performance in Tokyo.