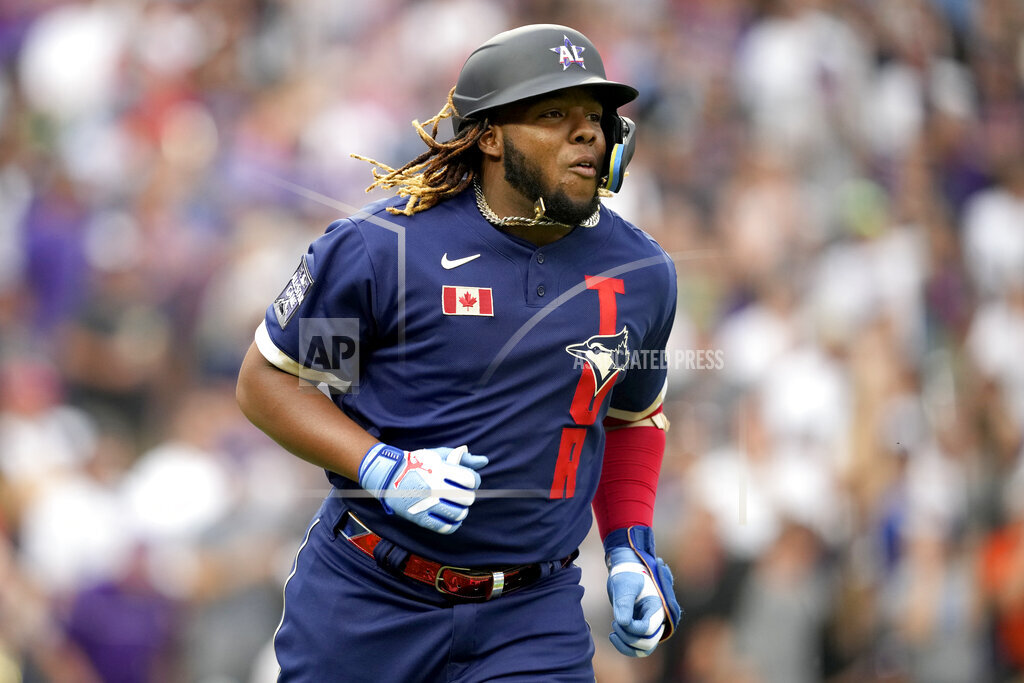 American 5, National 2 – AL makes it 8 straight wins
The American League has earned its eighth consecutive All-Star Game victory.  Vladimir Guerrero Jr. and Mike Zunino hit solo homers and Xander Bogaerts had two of the AL’s nine hits in a 5-2 victory over the National League.  Marcus Semien put the junior circuit ahead to stay with an RBI single in the second, one inning before Guerrero went deep. Guerrero also poked an RBI grounder and Bogaerts added a run-scoring single.  Guerrero is the first Toronto Blue Jay to be named the MVP of the All-Star Game. J.T. Realmuto put the NL on the board with a solo shot in the fifth.  Jared Walsh made a sliding catch in left field on Kris Bryant’s tricky liner with the bases loaded to end the eighth inning, keeping the AL ahead.  Angels star Shohei Ohtani made history as the first All-Star to be selected as both a pitcher and a hitter. He was the AL starting pitcher and worked a perfect first inning to get the win but finished 0-for-2 at the plate.  Corbin Burnes took the loss, yielding two runs and four hits over two frames.  The AL owns a 46-43-2 lead in the all-time series.

MLB – Manfred: Banning defensive shifts would be restoring MLB
Banning or limiting defensive shifts would be an effort to restore Major League Baseball to how it was played before offense was suffocated by analytics, according to baseball Commissioner Rob Manfred. Speaking before the All-Star Game to the Baseball Writers’ Association of America, Manfred said seven-inning doubleheaders and starting extra innings with runners on second base likely will be dropped after this season. He said extending the DH to the NL could be possible. Manfred said MLB was considering having umpires explain video review decisions to fans at ballparks over the public-address system, similar to the procedure in the NFL

MLB – Manfred: A’s fate in Oakland to be decided in coming months
Baseball Commissioner Rob Manfred says the fate of the Athletics in Oakland will be determined in the next few months. A’s owners have proposed a new ballpark in the Howard Terminal area of Oakland, and Manfred said if the stadium project is not approved, the team would move forward with either a move to Las Vegas or a wider relocation search. Manfred says “The Oakland process is at an end” and adds “This is the decision point for Oakland as whether they want to have Major League Baseball going forward.”

NBA – Suns can hack and whack Giannis, but know he’ll keep coming
Giannis Antetokounmpo pointed to a pair of scratches, one on his forehead and the other on his cheek. Those NBA Finals battle scars are proof, he figures, that the frustrated Phoenix Suns are indeed fouling him. The Suns may be smacking and hacking him, but they sure aren’t stopping the Milwaukee Bucks star. Coming off two straight 40-point performances, Antetokounmpo will try to help the Bucks even the series in Game 4 on Wednesday. He shot 17 free throws in Game 3. The Suns only had 16 as a team. The Suns know he will keep attacking no matter what.

NBA – NBA Finals ratings up from 2020 pandemic, down from 2019
The NBA Finals has gained some, but not all of its audience back after last year’s trip to the pandemic bubble. Ratings were way down last year when the Finals were held in October with no live audience watching the L.A. Lakers win the championship. This year, back closer to a normal time and with a live audience providing atmosphere, viewership was up 41% compared to the first three games of last year. Still, the opening games were down 34% from 2019, the last time there was a “normal” series and Toronto beat Golden State.

WNBA – US Olympic team expects competitive game vs WNBA All-Stars
Both the U.S. Olympic team and the WNBA All-Stars expect a competitive game in the league’s showcase. Usually there’s not much defense played in All-Star games until the fourth quarter, but this one could be different with the Olympians having limited time to get ready for the Tokyo Games. It’s the first time since 2000 the WNBA has held the All-Star game during an Olympic year.

NHL – Quenneville offers to participate in Blackhawks review
Florida Panthers coach Joel Quenneville has offered to participate in the Chicago Blackhawks’ review of allegations by a former player who says he was sexually assaulted by a then-assistant coach in 2010. Quenneville, 62, coached Chicago to three Stanley Cup titles over 10-plus seasons before he was fired by the team in November 2018. He was hired by Florida in April 2019. A former federal prosecutor has been hired by the Blackhawks to conduct an independent investigative review of the allegations in a pair of lawsuits filed against the franchise.

NHL – Predators goaltender Pekka Rinne retiring after 15 seasons
Nashville Predators goaltender Pekka Rinne is retiring after 15 seasons. The 38-year-old Rinne announced his decision Tuesday. The Finland native says he’s been on an incredible journey, with the Predators taking him to more places than he could imagine. Rinne says this decision wasn’t easy but the right one at the right time. The 2018 Vezina Trophy winner made his last start on May 10 in Nashville’s regular-season finale. He won his 60th career shutout, which tied him with Tom Barrasso for No. 19 in NHL history with his 369th victory.

Olympics – Men’s Basketball – Americans finally win
USA Basketball finally made it look easy again. Kevin Durant and Bradley Beal each scored 17 points and the Americans took control from the outset. They beat Argentina 108-80 to avoid what would have been the first three-game losing streak in this era of NBA players being able to represent USA Basketball on the international stage. The Americans lost their first two games in Las Vegas to Nigeria and Australia. The Americans shot 51% and scored 33 first-quarter points to get off and running and beat Argentina for the 10th consecutive time. Luis Scola scored 16 points for Argentina.

Olympics – First lady to attend Olympics opening
Jill Biden will attend the opening ceremony of the summer Olympic games in Tokyo. The White House announced the trip Tuesday, even as the city has entered a new state of emergency over a rise in coronavirus cases.  President Joe Biden isn’t going. That’s a shift from the last time she attended, in 2010, when she and her husband led the U.S. delegation to the Winter Games in Vancouver.

Olympics – IOC chief slips up, refers to hosts as Chinese
International Olympic Committee head Thomas Bach is praising Tokyo as “the best-ever prepared city for the Olympic Games.”  But as he appeared in public for the first time since arriving in the Olympic host city last week, Bach tripped over his words, referring to his hosts as the “Chinese people” rather than “Japanese people,” before quickly correcting himself.  The pandemic-postponed Olympics open in 10 days.  The next Olympic games are the 2022 Winter Games in Beijing China.