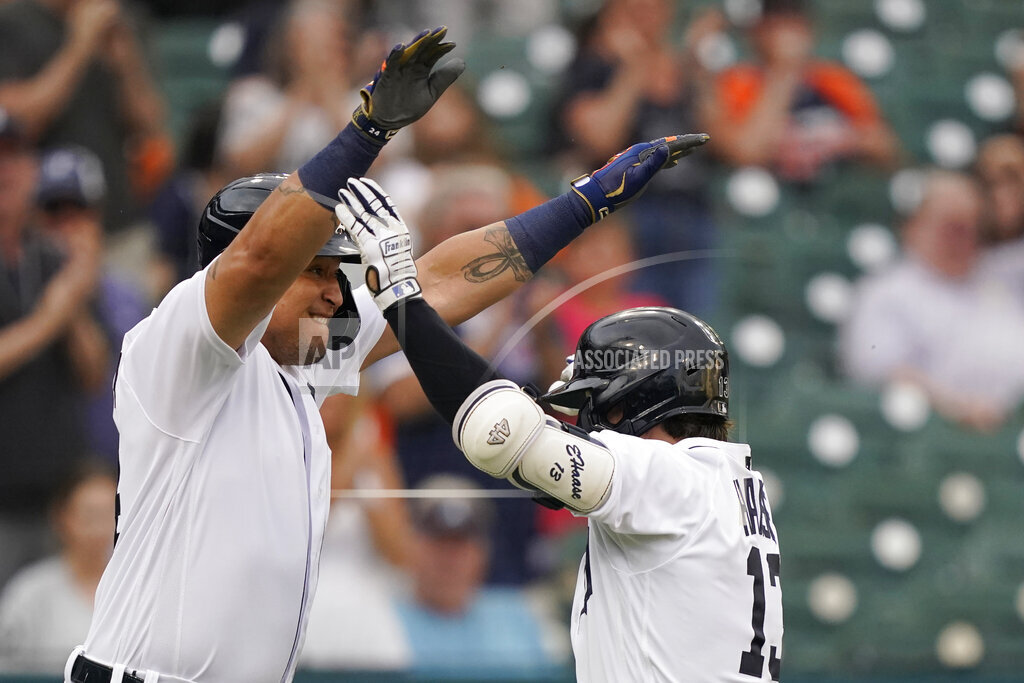 Tigers 5, Mariners 3 – Eric Haase homers in 1st and helps Tigers beat Mariners 5-3
Eric Haase hit a two-run homer in the first inning and the Detroit Tigers beat the Seattle Mariners 5-3. Matthew Boyd allowed an unearned run, six hits and a walk over six innings. Daniel Norris inherited the bases loaded with no outs in the eighth and limited Seattle to two runs. Jose Cisnero pitched the ninth for his second save. Marco Gonzales gave up four runs and five hits over four innings in his second start since coming back from a strained left forearm. The Tigers took advantage of Gonzales early, scoring four runs in two innings.

White Sox 6, Blue Jays 1 – Andrew Vaughn helps White Sox rally past Blue Jays 6-1
Andrew Vaughn homered in the seventh inning and delivered a tiebreaking sacrifice fly in the eighth, helping the Chicago White Sox beat the Toronto Blue Jays 6-1. Shut out by Robbie Ray for most of the game, Chicago got on the board on Vaughn’s fifth homer and then broke it open with five runs in the eighth. After Vaughn made it 2-1 with a bases-loaded fly ball to deep center against Trent Thornton, Adam Eaton drove in Yermín Mercedes with a pinch-hit single. Leury García added a two-run triple, and Tim Anderson capped the rally with a sac fly.

Cubs 7, Padres 1 – Davies strong, Rizzo, Wisdom homer in Cubs’ 7-1 win vs Pads
Zach Davies allowed just one hit in six scoreless innings, Anthony Rizzo homered and drove in four runs, and Patrick Wisdom went deep again for the Chicago Cubs as they defeated the San Diego Padres 7-1. Willson Contreras also homered for the Cubs, who have beaten the Padres four times in five games in a span of nine days. Chicago swept the Padres at Wrigley Field last week, when Wisdom homered three times, including twice in the first game. San Diego won the opener of this series 9-4 on Monday night. Wisdom has eight homers in 15 games.

NBA – Jokic takes MVP honors
Nikola Jokic wasn’t highly regarded when he was taken in the NBA draft. He’s now the league’s reigning MVP. The Nuggets’ big man has been revealed as the NBA’s top player making him by far the lowest draft pick ever to win the award.  The Serbian product has become a dominant force since being selected 41st overall in the 2014 draft.  Jokic’s scoring average jumped from 19.9 points per game last season to 26.4. He tied his career high with 10.8 rebounds per game, and his average of 8.3 assists was just shy of Wilt Chamberlain’s all-time season average for a center.  Jokic was the runaway winner, getting 91 of the 101 first-place ballots cast

NFL – Aaron Rodgers not present as Packers open mandatory minicamp
Aaron Rodgers wasn’t with the Green Bay Packers for their first mandatory minicamp session. This marks the latest chapter in the standoff between the team and its MVP quarterback. Rodgers also hadn’t participated in the Packers’ voluntary organized team activities. That represented a change from his usual offseason routine. The Packers have the option to fine Rodgers just over $93,000 if he misses all three minicamp sessions this week. Rodgers’ future with the team has been uncertain ever since ESPN reported shortly before this year’s draft that the three-time MVP doesn’t want to return to Green Bay.

NFL – NFL funding research to help players better manage pain
The NFL will spend up to $1 million funding up to five studies that will examine how to better help players ease their pain and find alternatives to opioids. Those potential alternatives include marijuana and other cannabis-derived products. The league and the NFL Players Association formed a joint pain management committee in 2019 to help find alternatives to opioids and give players and league medical staffs information on pain management. Some retired NFL players have spoken out about their use of marijuana during their time in the league and said it’s a better way of managing pain than the drugs prescribed by team doctors. The league prohibits marijuana use by players.

NFL – Jim Fassel, coach who took Giants to Super Bowl, dies at 71
The former New York Giants coach Jim Fassel has died. The team says family friends informed them of his death Monday. Son John Fassel, the special teams coordinator of the Dallas Cowboys, told the Los Angeles Times his father was taken to a hospital in Las Vegas with chest pains and died while being treated. Fassel guided the Giants to three playoffs berth, including a Super Bowl appearance in 2001. Fassel was the 1997 NFL coach of the year. Fassel coached the Giants from 1997 to 2003, posting a 58-53-1 record. Among his players was Michael Strahan, who called him "a great man, great coach.” Jim Fassel was 71.

NCAABB – Dates, sites set for NCAA baseball tourney super regionals
The NCAA announced the schedule for the eight super regionals in the Division I baseball tournament. No. 1 seed Arkansas opens at home against North Carolina State on Friday night. Other Friday openers have East Carolina at Vanderbilt, Stanford at Texas Tech and Mississippi at Arizona. Saturday openers are South Florida at Texas, LSU at Tennessee, Notre Dame at Mississippi State and Dallas Baptist against Virginia or Old Dominion in Columbia, South Carolina. Winners in the best-of-three series advance to the College World Series in Omaha, Nebraska.

Horse Racing – Baffert, Medina Spirit owners sue Kentucky racing officials
Trainer Bob Baffert and the owners of Kentucky Derby winner Medina Spirit have filed a lawsuit against Kentucky racing officials. They are seeking a temporary injunction they say is to prevent violation of due process rights and for custody of “remnant” samples of the colt’s urine to prove that traces of the steroid betamethasone found in his system during a positive drug test did not come from an injection. The suit states that the Kentucky Horse Racing Commission told the trainer and connections on June 1 that remnant samples of the samples had been “damaged/contaminated” during transport to the testing lab.

Tennis – French Open – Tsitsipas, Zverev in semifinal
Men’s fifth seed Stefanos Tsitsipas and Alexander Zverev have advanced to the French Open semifinals and will square off on Thursday. Tsitsipas has reached the semifinals for the second year in a row by downing No. 2 Daniil Medvedev, 6-3, 7-6, 7-5. Zverev shook off a slow start to beat Spanish opponent Alejandro Davidovich Fokina, 6-4, 6-1, 6-1 in little more than 1 1/2 hours. Anastasia Pavlyuchenkova has reached the first Grand Slam semifinal of her career by coming back to beat doubles partner Elena Rybakina 6-7, 6-2, 9-7 at the French Open. Pavlyuchenkova next faces Tamara Zidansek, who became the first Slovenian woman to reach a Grand Slam semifinal. The 85th-ranked Zidansek beat Paula Badosa of Spain. 7-5, 4-6, 8-6.

Boxing – Documentary celebrates Muhammad Ali 5 years after his death
A new documentary looks at the week of Muhammad Ali’s funeral in Louisville, Kentucky, when the community came together to celebrate the legacy of “The Greatest.”  Five years after his death, residents, as well as Ali’s daughter, Rasheda Ali, look back at the legacy of the boxer and the ways the people of Louisville have come together since his passing.