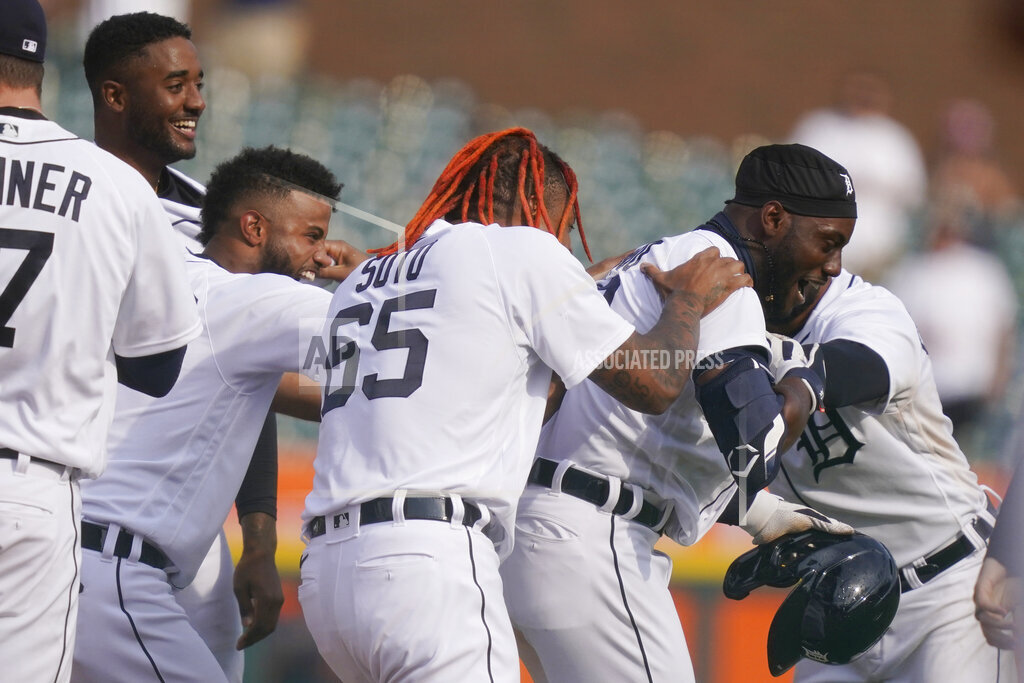 Tigers 4, Twins 3 – F/10 – Woo hoo! Baddoo hits again, Tigers rookie tops Twins in 10th
Akil Baddoo added another big hit in this charmed start to his big league career, lining an RBI single in the bottom of the 10th inning to give the Detroit Tigers a 4-3 victory over the Minnesota Twins. Baddoo made his debut Sunday and homered on the first pitch thrown to him. Then he hit a grand slam in a 15-6 loss to the Twins on Monday. The 22-year-old entered Tuesday’s game as a pinch-runner and stayed in until he ended it with a winning hit to right off Hansel Robles. Nelson Cruz and Byron Buxton homered for the Twins, who rallied from a 3-1 deficit.

Brewers 4, Cubs 0 – Peralta pitches 5 innings as Brewers blank Cubs 4-0
Freddy Peralta pitched five sharp innings, Travis Shaw hit a three-run homer and the Milwaukee Brewers beat the Chicago Cubs 4-0 to stop a three-game slide. Peralta struck out eight and walked four. Kris Bryant doubled in the fourth for Chicago’s only hit of the game. Shaw connected in the first against Adbert Alzolay, sending an opposite-field drive deep to left-center. Daniel Vogelbach walked with one out and Christian Yelich singled ahead of Shaw’s first homer of the season.

White Sox 10, Mariners 4 – Abreu slams 200th career homer, White Sox topple M’s 10-4
Jose Abreu hammered a grand slam into the second deck for his 200th career home run, Luis Robert and Zack Collins both went deep for the first time this season and the Chicago White Sox beat the Seattle Mariners 10-4. The miserable night for Seattle began with starting pitcher James Paxton leaving in the second inning due to a left elbow injury. Robert snapped a 3-all tie with a two-run shot off Nick Margevicius in the fifth. Collins had given the White Sox an early lead in the second by greeting Margevicius with a three-run shot. Abreu provided the capper with the fourth grand slam of his career and second this season.

Bulls 113, Pacers 97 – Vucevic helps Bulls run past short-handed Pacers 113-97
Nikola Vucevic had 32 points and 15 rebounds, Zach LaVine added 19 points and the Chicago Bulls overwhelmed short-handed Indiana 113-97. Chicago has won two straight since snapping a six-game losing streak and won the season series 2-1 over the Pacers. Indiana was led by Caris LeVert’s 20 points. The Pacers, who started the game without two starters and lost starting center Myles Turner in the third quarter, never recovered after falling behind by 15 points late in the first half.

Nuggets 134, Pistons 119 – Nikola Jokic’s 27 points leads Nuggets past Pistons 134-119
Nikola Jokic scored 27 points in leading the Denver Nuggets past the Detroit Pistons 134-119 Tuesday night. The Nuggets spoiled the return of former teammates Jerami Grant and Mason Plumlee. This was their first game in Denver since leaving the Nuggets in the offseason. Grant scored 29 points in his return and Plumlee had four points. The Nuggets are 5-0 with trade deadline acquisition Aaron Gordon in the lineup, and overall they’ve won 15 of their last 18 games to move into the NBA championship chase.

Predators 3, Red Wings 2 – SO – Predators beat Red Wings 3-2, improve to 4-0 in shootouts
Ryan Johansen and Roman Josi scored in the shootout to lift the Nashville Predators over the Detroit Red Wings 3-2 on Tuesday night.  The Predators improved to 4-0 in shootouts. Dylan Larkin and Filip Zadina failed to score in the first shootout of the season for the Red Wings. Adam Erne and Danny DeKeyser scored in regulation for Detroit. Thomas Greiss had 29 saves. Mikael Granlund and Luke Kunin scored for Nashville. Juuse Saros made 25 saves.

NCAAMBB – NCAA may consider single site for part of future tourneys
An NCAA official says the governing body may consider using a single site for later rounds of men’s college basketball tournaments following a successful run in Indianapolis. Senior vice president of basketball Dan Gavitt told reporters Tuesday that it was unlikely to occur before 2027 or that all 68 teams would play at one site. But if schools and coaches are interested, Gavitt says the model could work for future regional games and the Final Four.

NFL – Lions sign CB Quinton Dunbar to bolster shaky secondary
The Detroit Lions have signed cornerback Quinton Dunbar. Detroit made the move Tuesday, adding desperately needed help in its secondary. Dunbar had armed robbery charges dropped against him last year in a case that also involved New York Giants defensive back DeAndre Baker, who also was cleared. Dunbar has at least one interception in each of his six NFL seasons. He has 10 career interceptions and 171 tackles over five seasons with Washington and one year in Seattle. Dunbar started six games for the Seahawks last season and had one interception and 30 tackles before having season-ending knee surgery.

NFL – Rodgers gets surprise during ‘Jeopardy!’ hosting stint
Green Bay Packers quarterback Aaron Rodgers got quite the surprise in his first episode as a guest host of “Jeopardy!” Contestant Scott Shewfelt didn’t know the answer to the final question of the night and decided to reply by referencing a controversial Packers strategic decision in last season’s NFC championship game and asking “Who wanted to kick that field goal?” The Packers trailed the Tampa Bay Buccaneers 31-23 and had fourth-and-goal at the 8-yard line with just over two minutes when they opted to kick a field goal rather than going for the touchdown. 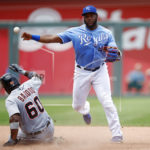 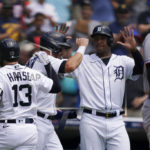 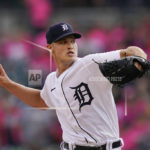