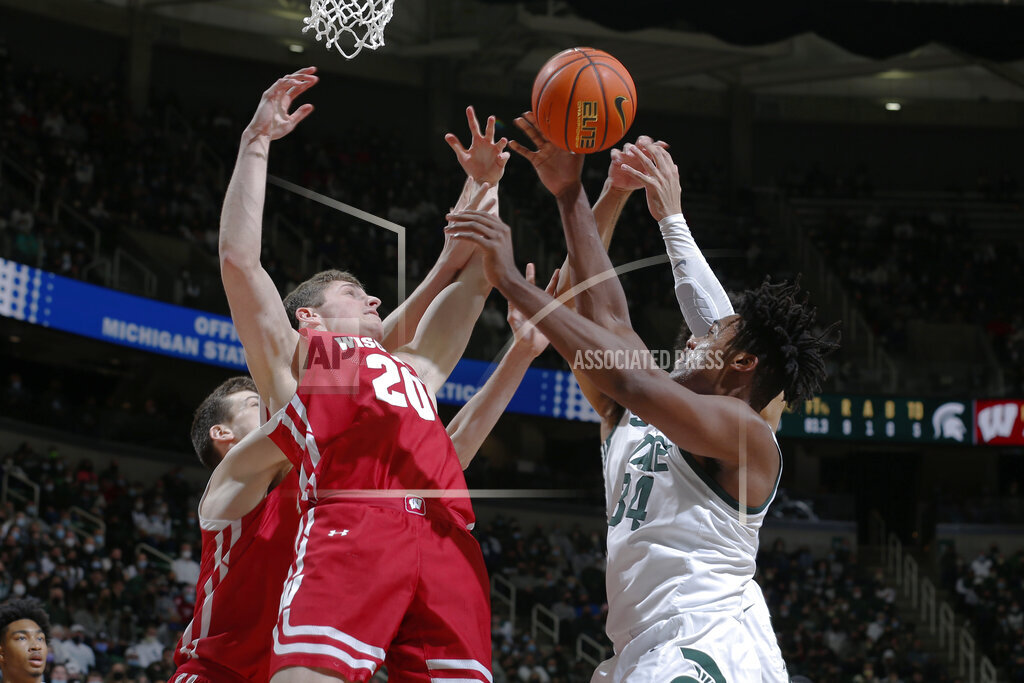 Michigan 58, Penn State 57 – Dickinson’s double-double helps Michigan beat Penn St. 58-57
Hunter Dickinson scored 19 points and matched a career best with 15 rebounds to lead Michigan to a 58-57 victory over Penn State. Michigan (12-9, 6-5 Big Ten) never trailed in the second half, but Penn State’s John Harrar made a pair of free throws to tie it at 48. The Wolverines answered with an 8-3 surge and led 56-51 with eight seconds to play. Jalen Pickett scored 14 points and Sessoms had 13 for Penn State (9-11, 4-8 Big Ten).

Central Michigan 89, Ball State 85 – OT – Healy leads Cent. Michigan past Ball St. 89-85 in OT
Cameron Healy scored a season-high 27 points including a game-tying 3-pointer with seven seconds left in regulation and Central Michigan went on to beat Ball State 89-85 in overtime. Healey’s jumper with 3:32 left were the first points of overtime and the Chippewas led for the remainder. Miryne Thomas had 17 points and 11 rebounds for the Cardinals.

Mavericks 116, Pistons 86 – Doncic’s 33 points, 11 assists lead Mavs past Pistons 116-86
Luka Doncic had 33 points and 11 assists, Jalen Brunson scored 21 points and the Dallas Mavericks overwhelmed the Detroit Pistons 116-86. The Mavs won their third game in a row. Doncic was three rebounds shy of his third consecutive triple-double. Hamidou Diallo had 18 points to lead the Pistons, who have lost five in a row and nine of 10. Jeramie Grant had 15 points and Isaiah Stewart had 14 points and 15 rebounds. The Pistons played their fourth game in a row without standout rookie Cade Cunningham, their leading scorer who missed the chance to play at home before family and friends because of a hip injury.

NFL – Authorities: No known threats to Super Bowl or LA region
Authorities say there are no known security threats to the Super Bowl. Officials on Tuesday outlined the coordinated law enforcement effort to keep the game at SoFi Stadium and the Los Angeles region safe. They say fans attending the game can expect an enormous police presence at the stadium, which will have a tightly monitored security perimeter. Meanwhile, patrol officers, tactical teams, K-9 units and paramedics will be deployed across Los Angeles County.

NFL – Kamara accused of punching a man about eight times
New Orleans Saints running back Alvin Kamara is accused of punching a man about eight times, badly injuring him in an attack also involving at least three men who were with Kamara at a Las Vegas Strip nightclub. That’s according to a police arrest report made public Tuesday.  The alleged victim fell unconscious while police say video shows he was punched, kicked and stomped on more than 20 times early Saturday. Identities of the three other alleged attackers were blacked out in the police report. No other arrests have been made. Kamara played in Sunday’s Pro Bowl game before he was arrested on a felony battery charge.

NFL – Titans extend GM, head coach
The Tennessee Titans wasted little time making sure general manager Jon Robinson and coach Mike Vrabel stick around for years to come. The Titans announced contract extensions for both Robinson and Vrabel barely two weeks after the season ended. Robinson has overseen six straight winning seasons since being hired in January 2016. That ranks second in the NFL in that span. Vrabel has won 43 games in his four seasons.

Iditarod – Moose attacks Iditarod rookie’s sled team, injures 4 dogs
A bull moose spent more than an hour stomping on the sled dog team of a rookie Iditarod musher in the wilds of Alaska last week. And the attack didn’t end even after Bridgett Watkins emptied her gun into the animal. She said on Facebook last Friday that the moose seriously injured four of her dogs and wouldn’t leave. The ordeal stopped after a friend showed up with a larger caliber gun and killed the moose. Watkins wrote that the attack first reported by the Fairbanks Daily News-Miner happened while she was on a training run for the Iditarod Trail Sled Dog Race. Her injured dogs are recovering.