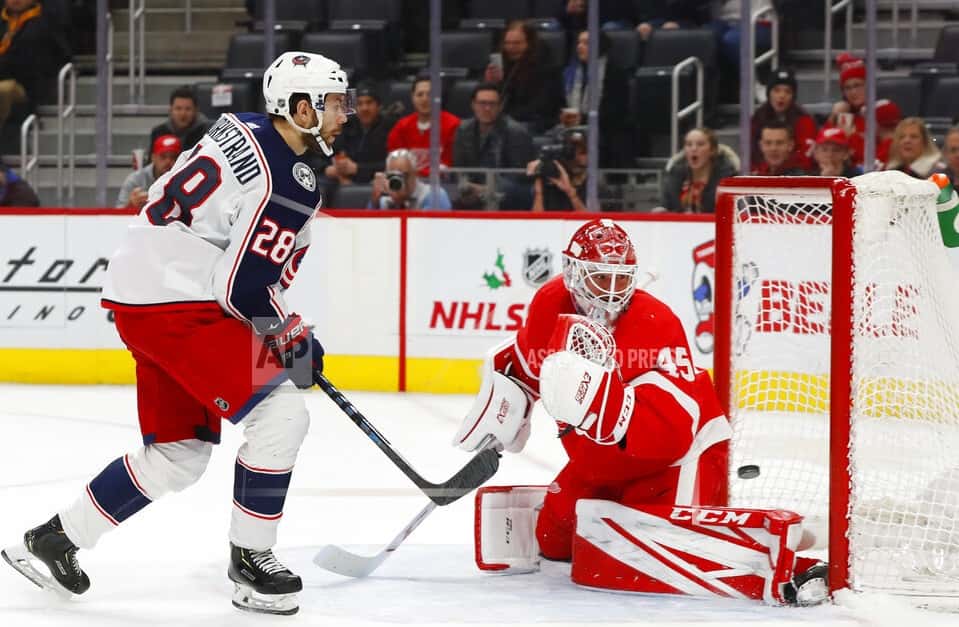 NBA
Pacers 105, L.A. Lakers 102
Malcolm Brogdon scored on a reverse layup with 36.4 seconds left to break a tie and give the Pacers a 105-102 win over the Los Angeles Lakers. The victory ended a 14-game road winning streak for the Lakers. They fell two games short of their own NBA record. LeBron James missed a 3-pointer that would have given Los Angeles the lead with 11.7 seconds left. He had 20 points, nine rebounds and nine assists. The Lakers also got two shots in the closing seconds to try and force overtime but missed both.

Tonight…
Chicago at Washington, 7:00
Toronto at Detroit, 7:00
The Pacers are off

NHL
Columbus 5, Red Wings 3
Pierre-Luc Dubois scored early in the third period and Gustav Nyquist added an empty-net goal in the closing seconds, helping the Columbus Blue Jackets beat the Red Wings 5-3. Columbus has won two straight for the first time in nearly a month. Detroit has lost 14 of its last 16 games. Joonas Korpisalo stopped 18 shots for the Blue Jackets. Jonathan Bernier had 34 saves for the Red Wings. Adam Erne scored his first goal in his 27th game with the Red Wings early in the first period and had another goal late in the opening period.

Tonight…
Colorado at Chicago, 8:00
The Red Wings are off

NFL
The Lions are retaining general manager Bob Quinn and coach Matt Patricia for the 2020 season despite the team’s 3-10-1 record. The Lions have dropped 10 of their last 11 since a 2-0-1 start and will carry a seven-game losing streak into Sunday’s game at Denver. Detroit hired both away from New England in the hopes of replicating the Patriots’ formula for success.

COLLEGE FOOTBALL
Former Iowa coach passes away
Hayden Fry, the Texan who revived Iowa football and became a Hawkeye State institution, has died. He was 90. Fry’s family announced through the University of Iowa that the coach died Tuesday after a long battle with cancer. The native of Eastland, Texas, had never been to Iowa before taking over the Hawkeyes in 1979. The team had slogged through 17 consecutive years without a winning season. He coached at Iowa for 20 seasons, winning 238 games and three Big Ten championships. He played quarterback at Baylor and his first college head coaching job was at SMU.

Top Honor For LSU’s Orgeron
Ed Orgeron of LSU is The Associated Press Coach of the Year after leading the top-ranked Tigers to an SEC championship and their first College Football Playoff appearance.

BASEBALL
Whitaker to be honored by Tigers
The Tigers are retiring Lou Whitaker’s No. 1 this coming season. Whitaker will become the ninth Tiger to have his number retired by the team, and the first to be so honored without being inducted into the Hall of Fame. He was the American League Rookie of the Year in 1978, went to five straight All-Star games, won three Gold Gloves and compiled a .276 average with 244 home runs and 1,084 RBIs in a 19-year career spent entirely with Detroit.

Garcia signs with Milwaukee
Free-agent outfielder Avisaíl García has finalized a two-year, $20 million contract with the Brewers, a deal that includes a $10 million club option for 2022. García batted .282 with a career-high 20 home runs and 72 RBIs for the Rays last season.