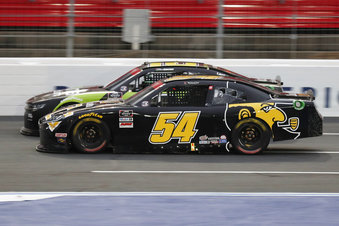 Kyle Busch passed Austin Cindric on the final lap in overtime to win his 97th career Xfinity Series race on Monday night at Charlotte Motor Speedway. After a crash involving several cars sent the race to overtime, Cindric passed Busch on a restart starting at the inside lane of the front row. But Busch pushed the pedal to the floor and passed Cindric on the last lap to earn his 18th overall win at Charlotte Motor Speedway, more than any other driver.

The NHL is hoping to move to Phase 2 of its return-to-play protocol early next month. That includes opening practice facilities and allowing small group workouts.
Six players will be allowed in team facilities at one time for the voluntary workouts. No on-ice coaching or instruction is permitted.
A 22-page memo detailing the plan stresses there’s no exact date for the start of Phase 2 or a timetable for how long it will last.

Turner Sports said that Sunday’s telecast of “The Match: Champions for Charity”, pitting Phil Mickelson and Tom Brady against Tiger Woods and Peyton manning, attracted an average of 5.8 million viewers across four of its networks. Turner says it was the most-watched golf telecast in cable TV history.
The PGA Tour is set to return in two weeks at Colonial in Fort Worth, Texas, for the Charles Schwab Challenge.

A group of Power Five coaches led by Michigan’s Erik Bakich is proposing a later start to the college baseball season. They say it would trim expenses in the post-coronavirus era, make the game more fan friendly and reduce the risk of injury to players. Under the proposal, the regular season would run from the third week of March to the third week of June and the College World Series would wrap up the last week of July.