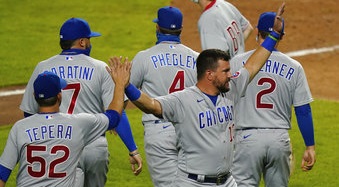 Maikel Franco hit two of Kansas City’s six home runs, and the Royals beat the Tigers 14-6, spoiling Detroit’s home opener. Whit Merrifield had three hits and three RBIs, finishing a triple shy of the cycle on a night when the Royals rallied from an early 5-1 deficit. Foster Griffin won in relief, but he also had to leave his major league debut with a left forearm strain. Detroit’s Michael Fulmer allowed three homers in his first start back from Tommy John surgery.
Tonight…Kansas City (tba) at Tigers (Dario Agrazal), 7:10 – live on 94.9 WSJM

Anthony Rizzo homered for the third time, and the Cubs held on for an 8-7 victory over a Cincinnati Reds team coping with coronavirus uncertainty. Jeremy Jeffress escaped a bases-loaded threat in the ninth for his first save with the Cubs. Wade Miley failed to make it through the second inning of his Reds debut. Rizzo scored three times as the Cubs won for the third time in four games. The Reds dropped to 1-3, a disappointing start after their $165 million offseason makeover.
Tonight…Cubs (Alec Mills) at Cincinnati (Tyler Mahle), 6:40

The series opener between the White Sox and Cleveland was postponed by rain. The teams will make up the game as part of a traditional doubleheader today starting at 3:40 p.m.
Today…
Game 1 – White Sox (Dylan Cease) at Cleveland (Aaron Civale), 3:40
Game 2 – White Sox (Carlos Rodon) at Cleveland (Adam Plutko), approx. 7:10

White Sox manager Rick Renteria was kept away from the team yesterday pending the results of medical tests. General manager Rick Hahn issued a statement saying Renteria woke up with a “slight cough and nasal congestion.” Renteria was taken to a Cleveland hospital for evaluation and tests. It was reported late last night that Renteria tested negative for the coronavirus. He should be with the team today.

More than a dozen Miami Marlins players and staff members tested positive for COVID-19 in an outbreak that stranded the team in Philadelphia, disrupting Major League Baseball’s schedule on the fifth day of the pandemic-delayed season. Miami’s home opener against Baltimore was postponed as was Tuesday’s finale of the two-game series at Marlins Park. Also postponed was the Yankees’ series opener Monday at Philadelphia, where New York would have been in the same clubhouse the Marlins used last weekend. Nine Marlins players on the 30-man roster, two taxi squad players and two staff members tested positive. The Yankees are staying in Philadelphia and have their own clubhouse staff with the team there. The Marlins postponed their flight home Sunday night after their series finale against the Phillies.
The Orioles are scheduled to host the Marlins in a two-game series starting Wednesday.

The National Hockey League reported zero players tested positive for the coronavirus last week. The league says it administered a total of 4,256 tests to more than 800 players from July 18-25. Two players tested positive during the first week of training camps July 13-17. Players and staff from the 24 teams participating in the expanded Stanley Cup playoffs traveled to the hub cities of Toronto and Edmonton, Alberta, on Sunday. They’re now in a quarantined bubble and will be tested daily after every other day testing during camp.

The Great Lakes Intercollegiate Athletic Conference Council of Presidents voted Friday to play a conference-only schedule during the fall 2020 sports season and will evaluate the feasibility of league competition on a sport-by-sport basis.
Playing a conference-only schedule affords GLIAC members additional time to get student-athletes back on campuses and through COVID-19 monitoring protocols, as well as the necessary time to conduct pre-season training in football, volleyball, soccer, cross country and women’s tennis. During the past month, GLIAC athletic directors, athletic trainers and the league’s COVID-19 task force developed safe competition protocols and updated scheduling modules for fall and winter sports. The task force is relying on NCAA and CDC (Centers for Disease Control) recommendations as the league endeavors to return safely to competition. GLIAC presidents plan to reconvene in early August to re-evaluate each school’s ability to meet the recommendations put forth by the task force.

Plans for the college football season — if it is played — should start coming into focus this week. They will trickle down from the top of major college football. The Power Five conferences are putting in place revised schedules they hope will make it easier to manage potential disruptions brought on by COVID-19. The Power Five commissioners talked a lot in the spring about the importance of collaboration and trying to launch the season together, with all of the Football Bowl Subdivision acting in unison. The way things are heading, that appears to be out the window.

Dr. Anthony Fauci says the Miami Marlins’ coronavirus outbreak could endanger the Major League Baseball season but he doesn’t believe games needs to stop now. More than a dozen Marlins players and staff members tested positive for COVID-19. The team has been stranded in Philadelphia and questions have been raised anew about MLB’s attempts to conduct a season. Fauci made his comments on ABC’s “Good Morning America.” He says Major League Baseball has put protocols in place that he felt would work to allow a season to be played. The Marlins’ outbreak has continued to disrupt the schedule. Their game against Baltimore has been postponed.