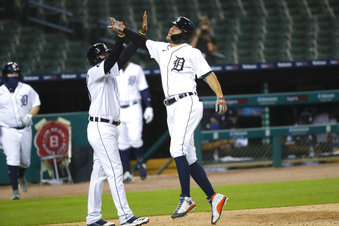 Baseball last night…
JaCoby Jones hit an inside-the-park home run in the seventh inning and the Tigers breezed to their fourth straight victory, 5-1 over the White Sox. Niko Goodrum homered and had four hits for the Tigers, who handed Chicago its fifth loss in six games. It wasn’t all good news for Detroit, though. First baseman C.J. Cron exited with a left knee injury in the fourth. White Sox slugger Jose Abreu came up limping after grounding out in the eighth and left the game as well. The Tigers improved to 9-5 on the year after losing 114 games in 2019.

Major League Baseball has announced that the Tigers’ scheduled Thursday doubleheader against St. Louis has been postponed as the Cardinals continue to have their schedule altered after eight players tested positive for the coronavirus. MLB and the Cards believe it is prudent to continue additional testing while players and staff are quarantined before the team returns to play.

In area high school sports, Lake Michigan Catholic has decided to cancel its fall sports season. Last week, Lansing Public Schools cancelled its fall sports season and extracurricular activities. The Michigan High School Athletic Association is planning on fall sports around the state to proceed as scheduled. They continue to monitor the COVID-19 situation and will have another announcement by next Thursday, Aug. 20.

Big Ten presidents and chancellors are scheduled to meet this morning to make an official decision on its football season. It was reported yesterday morning that the conference was cancelling the season, but it was discovered that no official vote had been taken. That vote is expected to happen today.

Old Dominion is canceling its fall sports season because of the coronavirus pandemic. President John Broderick said he knows student-athletes and fans will be disappointed, but playing “posed too great a risk.”

The Hockey Hall of Fame has postponed its 2020 induction because of the pandemic. The ceremony was to have taken place Nov. 16 in Toronto. The 2020 class was announced in June and featured forward Jarome Iginla, winger Marian Hossa, defensemen Kevin Lowe and Doug Wilson, Canadian women’s goaltender Kim St. Pierre and longtime general manager Ken Holland.

In tennis, 2004 U.S. Open champion Svetlana Kuznetsova is adding her name to the growing group of players withdrawing from the Grand Slam tennis tournament because of the coronavirus pandemic. Three of the top seven women in the rankings, including No. 1 Ash Barty, have pulled out of the U.S. Open. So has defending men’s champion Rafael Nadal.

The Indianapolis 500 was never going to be canceled. AP Auto Racing Writer Jenna Fryer writes that the race is too big and too important to land on the list of cancellations over the pandemic. The race will be held Aug. 23 for the 104th time. There will be no fans allowed inside the historic Indianapolis Motor Speedway. Closing the gates to spectators was the only way to pull off the race. The track opens Wednesday for teams to begin preparations. It will look and feel different from every other Indy 500 in history.