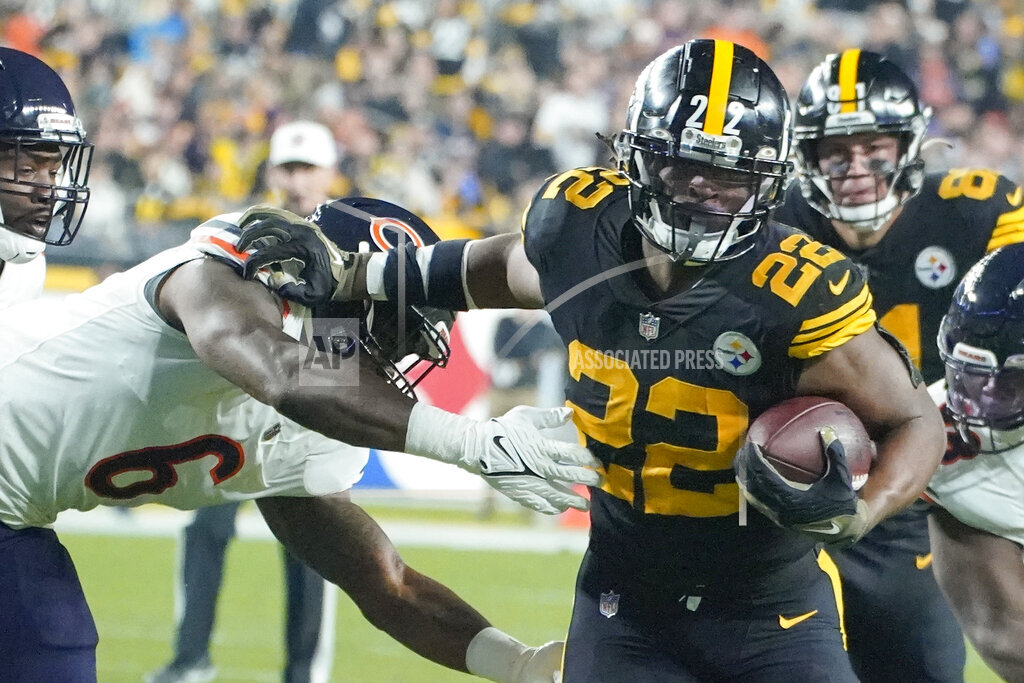 Steelers 29, Bears 27 – Boswell’s late field goal lifts Steelers past Bears 29-27
Chris Boswell’s 40-yard field goal with 26 seconds left lifted the Pittsburgh Steelers past the Chicago Bears 29-27. The Steelers needed the late rally after Chicago scored two fourth-quarter touchdowns to take the lead. Pittsburgh improved to 5-3. The Steelers have won 20 straight home games on “Monday Night Football.” Pittsburgh appeared to have the game well in hand before a fumbled punt return led to a Bears touchdown. Justin Fields then hit Darnell Mooney to put the Bears ahead with 1:46 to play. Ben Roethlisberger responded with the 50th game-winning drive of his 18-year career.

NFL – Odell Beckham Jr. waived by Browns, can be claimed
Odell Beckham Jr. is up for grabs. The challenging wide receiver was formally waived by the Cleveland Browns and can now be taken by any NFL team that wants him at a $7.25 million price tag for the rest of this season. Beckham essentially forced his exit last week from the Browns, who traded for him 2 ½ years ago but reached a point where they wanted out of the relationship as badly as he did. The 29-year-old Beckham can be claimed on waivers. The winless Detroit Lions get first crack at the three-time Pro Bowler.  Beckham has said he would only report to a team that is in contention of going to the playoffs.

Bulls 118, Nets 95 – Bulls pull away in 4th, win 118-95 to snap Nets’ 5-game run
DeMar DeRozan scored 28 points, Zach LaVine added 24 and the Chicago Bulls used a 42-point fourth quarter to pull away for a 118-95 victory over the Brooklyn Nets. Rookie Ayo Dosumnu had 15 points and played a key role in the late rally as Chicago snapped a two-game losing streak. Kevin Durant, who entered as the NBA’s leading scorer with a 28.6 average, had 38 points but Brooklyn had its five-game winning streak snapped. LaMarcus Aldridge added 19. The Nets had played Sunday in Toronto and appeared to run out of gas late.

NCAAFB – Big Ten – Frost agrees to salary cut in ’22; four assistants fired
Nebraska is bringing back coach Scott Frost in 2022 under a restructured contract that cuts his salary from $5 million to $4 million. The Cornhuskers are 15-27 in four years under Frost and his future has been the subject of speculation. The Huskers are 3-7 this season and last in the Big Ten West. Frost announced he has fired offensive coordinator Matt Lubick, offensive line coach Greg Austin, running backs coach Ryan Held and quarterbacks coach Mario Verduzco.

NCAAWBKB – Big Ten – Rutgers coach Stringer to miss season over COVID-19 concerns
Rutgers coach C. Vivian Stringer is going to miss the upcoming season because of COVID-19 concerns. The 73-year-old coach hasn’t been with the team since April, when the delta variant of the virus was becoming widespread in the United States. Stringer has a 40-year-old daughter who has required special care since contracting spinal meningitis at age 2. Stringer has 1,055 wins in her 50-year coaching career and is fourth all-time in Division I victories. She was going to start her 27th season at Rutgers. Associate head coach Tim Eatman has been filling in for Stringer since April.

NCAA – NCAA streamlines constitution, set to give power to schools
The NCAA has set the stage for a dramatic restructuring of college sports. Proposed changes include reshaping of Division I that will tackle revenue distribution, how rules are made and enforced and access to the most-high profile and lucrative NCAA events such as the men’s basketball tournament. There’s also the question of just how big the tent should be at the top of college sports. The rewritten constitution focuses more on the NCAA’s broad goals of athlete welfare and athletics as part of an academic experience instead of governing procedures and operations. Both matters have come under increasing criticism.

Olympics – Polish luge athlete injured in crash on Olympic track
Polish luge officials say a malfunction at the sliding track built for this winter’s Beijing Olympics caused one of its top athletes to crash and sustain a serious injury. The Polish team says Mateusz Sochowicz fractured a kneecap in the crash at the track in Yanqing, China. He also had cuts and bruises, and it’s not known if he can return this season. According to a release from the Polish Toboggan Sports Association, Sochowicz was on a training run and crashed into a barrier that should have been open when a sled is in the track.