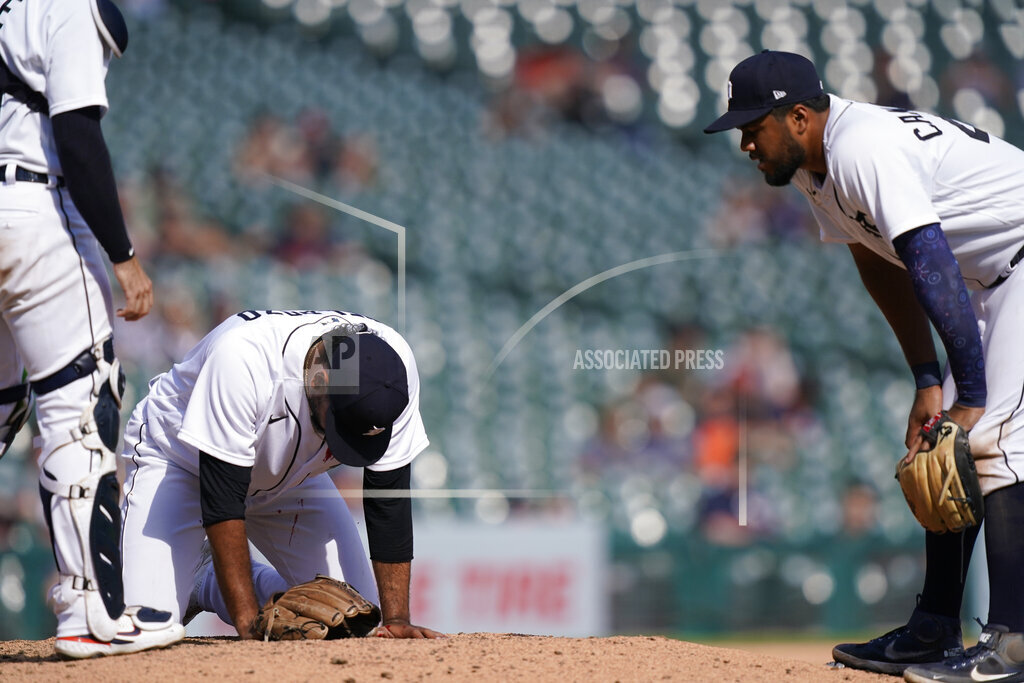 Twins 3, Tigers 2 – Donaldson, Ober lead Twins past slumping Tigers, 3-2
Bailey Ober pitched six solid innings and Josh Donaldson’s two-run homer helped the Minnesota Twins beat the Detroit Tigers 3-2. The game was a makeup from a July 16 rainout and was played in front of a minuscule crowd. The Twins have won three of four. Detroit has lost four of five, scoring only nine runs. Ober held the slumping Tigers’ offense to two runs on five hits in six innings. He struck out five without walking a batter. Alex Colome pitched the ninth for his 10th save. Detroit starter Casey Mize gave up three runs on five hits including Donaldson’s homer, his 21st of the season.

NFL – Lions backup QB Boyle needs surgery on broken right thumb
Detroit Lions backup quarterback Tim Boyle broke his right thumb in the team’s preseason finale and needs surgery. Lions coach Dan Campbell made the announcement Monday, adding the team is hopeful it was not a season-ending injury. Boyle was hurt Friday night in a loss to the Indianapolis Colts. Detroit acquired starting quarterback Jared Goff, a pair of first-round picks and a third-rounder from the Los Angeles Rams in a trade for Matthew Stafford. Third-year pro David Blough becomes Detroit’s No. 2 quarterback, heading into a Week 1 matchup at home against the San Francisco 49ers.

NFL – Dalton embraces chance with Bears, knowing Fields behind him
Andy Dalton is embracing his opportunity with the Chicago Bears. The Bears are sticking with their plan to open the season with him as their starting quarterback. They expect the three-time Pro Bowler to be the one staring down Aaron Donald when Chicago visits the Los Angeles Rams on Sept. 12, with prized rookie Justin Fields in a backup role. Dalton says he’s “focused on me" and how he can help the team. The Bears have said since they signed Dalton to a one-year deal that he is their No. 1 quarterback. It didn’t change after they traded up nine spots with the New York Giants to draft Fields with the No. 11 overall pick.

NFL – Saints working 500 miles from home after displaced by Ida
The New Orleans Saints are at the home of another NFL team after being displaced by Hurricane Ida. Saints players and staff, along with about 120 family members, relocated to North Texas in advance of the storm that made landfall south of New Orleans on Sunday as a powerful Category 4 hurricane with winds of 150 mph and left that entire area without power. Coach Sean Payton says the Saints will practice through Wednesday at AT&T Stadium, home of the Dallas Cowboys. That is before a previously planned break before the start of the regular season.

NCAAFB – No. 9 Irish opener at Florida State like 2019 at Louisville
When No. 9 Notre Dame opens its season Sunday night at Florida State, coach Brian Kelly wouldn’t mind a little deja vu. On Labor Day in 2019, the ninth-ranked Fighting Irish opened the season at Louisville. Leading the Cardinals 21-14 at halftime, the Irish dominated offensively and defensively for a 35-17 victory. Kelly expects a similar struggle against Mike Norvell’s Seminoles, who hope to rebound from a 3-6 campaign with an upset.

NCAAFB – Unranked Michigan enters season with chip on its shoulder
Jim Harbaugh and the Michigan Wolverines are looking forward to a fresh start. They need one. College football’s winningest program is coming off a rough season, even by pandemic standards. Michigan won just two games, lost four and had three canceled due to a COVID-19 breakout last year. In recent seasons, the team with the winged helmets and rich tradition has lost luster and relevance nationally as losses against better teams have piled up. The Wolverines will open the season unraked in The Associated Press college football poll on Saturday against Western Michigan at the Big House.

NCAAFB – Losing ways put Huskers’ record sellout streak in jeopardy
Nebraska coach Scott Frost is asking fans to hang in there with his team two days after a season-opening loss at Illinois. Frost’s comment came amid speculation Nebraska’s NCAA-record 375-game sellout streak will end this week when Fordham visits on Saturday. Frost is 12-21 in three-plus seasons. He said he hopes the fans remain excited and he thinks the Huskers are going to prove a lot to people this year. Nebraska did not disclose how many tickets remain. Tickets are available for as little as $12 on the secondary market.

NCAAFB – Heupel names Michigan transfer Joe Milton Vols’ starting QB
Tennessee coach Josh Heupel has named Joe Milton as the Volunteers’ starting quarterback four days before the season opener against Bowling Green. Milton arrived on campus this spring after three years at Michigan. He beat out Harrison Bailey and Hendon Hooker who transferred from Virginia Tech. Heupel says MIlton has a grasp of the Vols’ offense in a short amount of time. That combined with his physical abilities and decision-making to earn the job. Milton started five of Michigan’s six games last season. Heupel says Milton has run the No. 1 offense up to 10 days before game week.

NCAAFB – SEC won’t allow makeup games for short-handed teams
Southeastern Conference teams that don’t have enough available players will have to forfeit games this year. The league released its policy on dealing with COVID-19 issues during the 2021-22 season in all sports on Monday. Unlike last season, the short-handed team will have to forfeit and will take a loss in the SEC standings for regular season games. The scheduled opponent will be credited with a win. Commissioner Greg Sankey had indicated in July that teams would have to forfeit instead of getting windows to make up games like last season, emphasizing the need for teams to get vaccinated.

NCAA – Athletes, worker sue over vaccine rules at Michigan colleges
Four female soccer players at Western Michigan University are challenging the school’s COVID-19 vaccine requirement for athletes Monday, saying it violates their Christian beliefs. The lawsuit filed Monday comes days after a Michigan State University employee sued over its broader mandate that applies to all students, faculty and staff. The players say Western Michigan required them to get a shot by Tuesday or be removed from the team. They were denied religious exemptions. The Michigan State worker says she has natural immunity because she had COVID-19. Her complaint seeks class-action status for other school employees previously infected with the coronavirus.

Tennis – US Open – Osaka well received before winning at U.S. Open
Naomi Osaka is off to a good start as she tries to repeat as the U.S. Open women’s champion. Osaka struggled early before posting a 6-4, 6-1 victory over Marie Bouzkova. It was tied at 4-all in the first set until Osaka won the next seven games to take a 5-0 lead in the second set. Helped by a serve that reached 120 mph, Osaka saved all eight break points she faced and accumulated a 34-10 edge in total winners. Osaka didn’t play at Wimbledon after pulling out of the French Open following the first round for mental health reasons.

IIHF – Canada, US advance to women’s hockey final
Alex Carpenter and Abbey Murphy scored in the second period, and the United States beat Finland 3-0 to advance to the final of the women’s world hockey championship. The five-time defending champion United States will play in its 20th gold-medal game on Tuesday against Canada. Carpenter put the U.S. in front early in the second with her third goal of the tournament. Murphy scored on a breakaway to make it 2-0. In the second semifinal game, tournament scoring leader Melodie Daoust notched two goals to help Canada beat Switzerland 4-0.