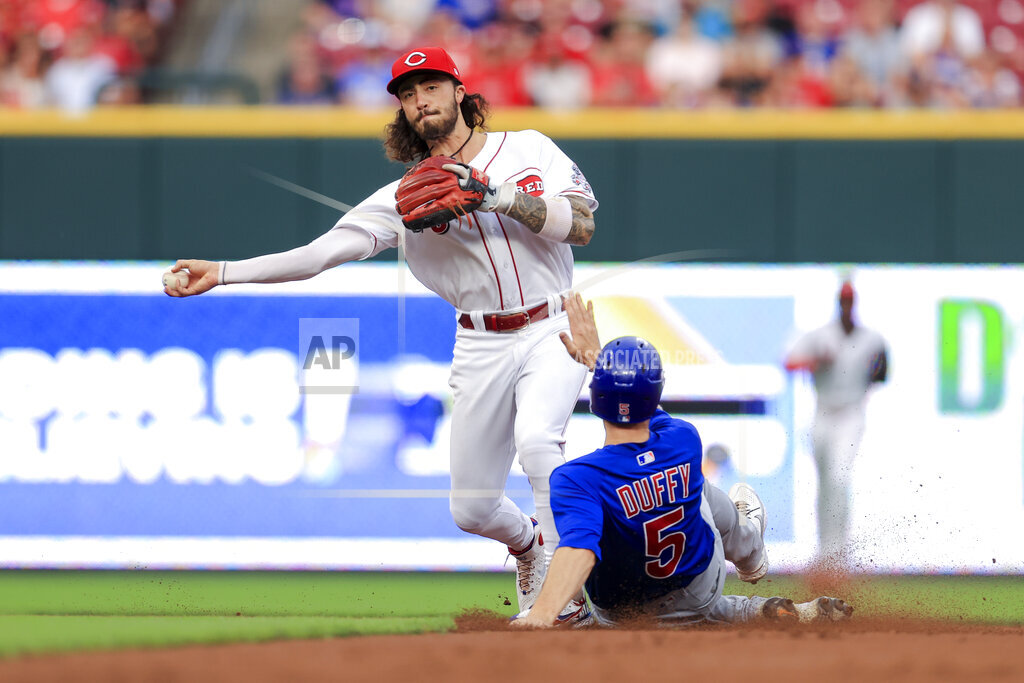 Reds 14, Cubs 5 – Votto gets 2,000th hit, Reds hand Cubs 12th straight loss
Jonathan India slammed a two-run homer and had five RBIs as the Cincinnati Reds beat the Chicago Cubs 14-5. The loss was the 12th straight for the free-falling Cubs. Cincinnati first baseman Joey Votto got the 2,000th hit of his career, a solid single in the seventh. He came up again later in the inning and drove in a run with another base hit during an eight-run Reds inning. Wade Miley allowed four hits and struck out seven over seven scoreless innings as the Reds won for the ninth time in 13 games to move within 7 1/2 games of first-place Milwaukee in the NL Central.

White Sox 5, Athletics 2 – Hendriks gets save as White Sox beat Athletics 5-2
Eloy Jiménez hit a tiebreaking RBI single and Liam Hendriks got the save against his former team, leading the Chicago White Sox to a 5-2 victory over the Oakland Athletics. Seby Zavala had two hits and two RBIs as Chicago improved to an AL-best 40-22 at home. Luis Robert homered, and Dallas Keuchel pitched five innings of two-run ball in his first win since July 9. Oakland dropped to 4-3 on a 10-game trip after it lost two of three at last-place Texas over the weekend.

MLB – Jake Arrieta catches on with Padres after release by Cubs
Jake Arrieta caught on with a playoff contender after getting released by the Chicago Cubs, signing a minor league deal with the San Diego Padres. The former NL Cy Young Award winner is expected to make his first start for San Diego on Wednesday against the Colorado Rockies. The Padres signed Arrieta to add depth to their injury-plagued rotation. Chris Paddack and Yu Darvish are on the 10-day injured list. The Cubs released Arrieta on Thursday, a day after he allowed eight runs in four innings against Milwaukee and mocked a reporter for wearing a mask during his postgame interview.

MLB – White Sox place OF Engel on IL with shoulder inflammation
The Chicago White Sox have placed outfielder Adam Engel on the 10-day injured list with left shoulder inflammation. The White Sox also promoted right-handers Ryan Burr and Mike Wright from Triple-A Charlotte. Reliever Matt Foster was sent down, and right-hander Zack Burdi was designated for assignment. The move for Engel was made retroactive to Friday. Engel also began the season on the IL with a hamstring injury.

MLB – Attorney: Astros settle case of girl hurt by foul ball
The attorney for a 2-year-old girl struck by a foul ball during a 2019 Houston Astros game at Minute Maid Park says the Astros have settled the family’s claim for damages. Attorney Richard Mithoff said Monday that the terms of the settlement are confidential. An Astros spokesman said the team would have no comment. The girl suffered a skull fracture and brain injury when she was hit by the ball. Mithoff says she has been on anti-seizure medication since. However, her doctors have been weaning her from the medication, and she hasn’t had a seizure in 22 months. Mithoff says her parents are hopeful about her future.

Pistons 79, Magic 78 – Garza impressive as Pistons hold off Magic 79-78
Luka Garza had 21 points and 15 rebounds, and the Detroit Pistons held on to beat the Orlando Magic 79-78 in the NBA Summer League. Top draft pick Cade Cunningham did not play for Detroit, and neither did Orlando’s Jalen Suggs, the No. 5 overall pick. Garza, the college player of the year from Iowa who was drafted near the end of the second round, had 15 points and 10 rebounds in the first half. The Pistons led by three at the end of the game. Tahjere McCall and Iggy Brazdeikis missed 3-pointers for the Magic, and Yante Maten’s tip-in was inconsequential.

NFL – Lions cut CB Alex Brown after he was involved in car crash
The Detroit Lions are aware of the car accident cornerback Alex Brown was involved in before his release. The 24-year-old South Carolina native has three games of NFL experience with the Kansas City Chiefs in 2019. Michigan State Police say the driver of the car that caused the crash was driving the wrong way on a highway in Detroit shortly after 2 a.m. on Sunday. Police say its investigation revealed that the 24-year-old male driver from South Carolina was impaired. Police say the passenger in the car going the wrong way as well as another driver were critically injured. The Lions say tight end Charlie Taumoepeau is receiving medical care following injuries sustained from the accident.

NFL – Giants waive QB Clayton Thorson, sign Brian Lewerke
The New York Giants have waived-injured third-string quarterback Clayton Thorson and signed former Michigan State star Brian Lewerke. The team announced the moves Monday, just two days after Thorson sustained a concussion while being sacked for a safety late in a 12-7 loss to the Jets. Thorson spent most of the 2020 season on the Giants’ practice squad. He played the final 2 1/2 quarters against the Jets and was hurt on New York’s final offensive play. Lewerke spent the spring and summer of last season with the New England Patriots.

NFL – Falcons first NFL team to have 100% of players vaccinated
The Atlanta Falcons have become the first NFL team to have all of its players complete COVID-19 vaccinations. The Falcons opened training camp with more than 90% of their players vaccinated, and they confirmed Monday they reached 100%. The NFL announced the Falcons were the first team to reach 100%. Atlanta becomes the first team able to have all its players not wear masks around the facility and eat and work out together.

NFL – Raiders to require vaccines for fans at home games
The Las Vegas Raiders will require all fans attending home games to show proof of vaccination for COVID-19. The team says the policy will take effect for the first regular season home game on Sept. 13 against Baltimore. The Raiders implemented the change in accord with new directives from Nevada Governor Steve Sisolak regarding large events. Vaccinated fans will not need to wear masks at the games.

Nevada governor: No masks at events that require vaccines
Large events like concerts and football games in one of the nation’s entertainment capitals will be able to exempt themselves from mask rules if they require guests to show proof of vaccination. Nevada Gov. Steve Sisolak announced Monday that large venues that hold ticketed events throughout the state won’t have to require people who have been inoculated against COVID-19 to wear masks. The announcement arrives amid a variant-fueled surge that has led to requirements elsewhere for businesses to mandate masks and verify patrons’ vaccination statuses. The Las Vegas Raiders announced hours later a plan to not require masks for fully vaccinated fans at games.

NCAAFB – Tucker has 20 transfers to help Michigan State’s turnaround
Mel Tucker is entering his second season at Michigan State. Even though Tucker is not a rookie with the Spartans, it seems as if he’s starting over. Tucker was hired away from Colorado 18 months ago and endured a pandemic-shortened season with a 2-5 record. The Spartans added 20 transfers, including former Temple quarterback Anthony Russo. Tucker has two options for a starting quarterback. He can go with Russo and redshirt sophomore Payton Thorne.

NASCAR – Race organizers looking for answers after Brickyard finish
The closing laps of this weekend’s Brickyard 200 looked like a demolition derby. One by one, cars veered off course — 16 in all. Many of those that remained on the track also suffered damage, much of it caused by a deteriorating curb in the midsection of the road course. Race organizers want to keep the Cup Series race on Indianapolis’ road course next year. But they say they also need to figure out what happened over the weekend to avoid a long series of wrecks.

Soccer – US forward Carli Lloyd retiring after decorated career
Carli Lloyd has announced her retirement from soccer. The 39-year-old forward for the U.S. national team had long hinted she would step away from the game following the Tokyo Olympics after a 16-year international career. Lloyd scored a pair of goals in the United States’ 4-3 victory over Australia to win the bronze medal in Japan. Lloyd was the first American to score in four different Olympics, and her 10 total goals in the event set a new record among U.S. players.

Paralympics – Paralympics follow lead of Olympics: No fans during pandemic
All fans will be barred from the Paralympics because of the coronavirus pandemic just as they were from the recently-completed Tokyo Olympics. The Paralympics open on Aug. 24 with about 4,400 athletes. That is a far smaller event than the Olympics with 11,000 athletes. But the Paralympics come as new infections accelerate in Tokyo that may expose a population that is more vulnerable to COVID-19. New infections in Tokyo tripled during the 17 days of the Olympics. Medical experts say the surge was not directly linked the Tokyo Games but they suggested an indirect effect.