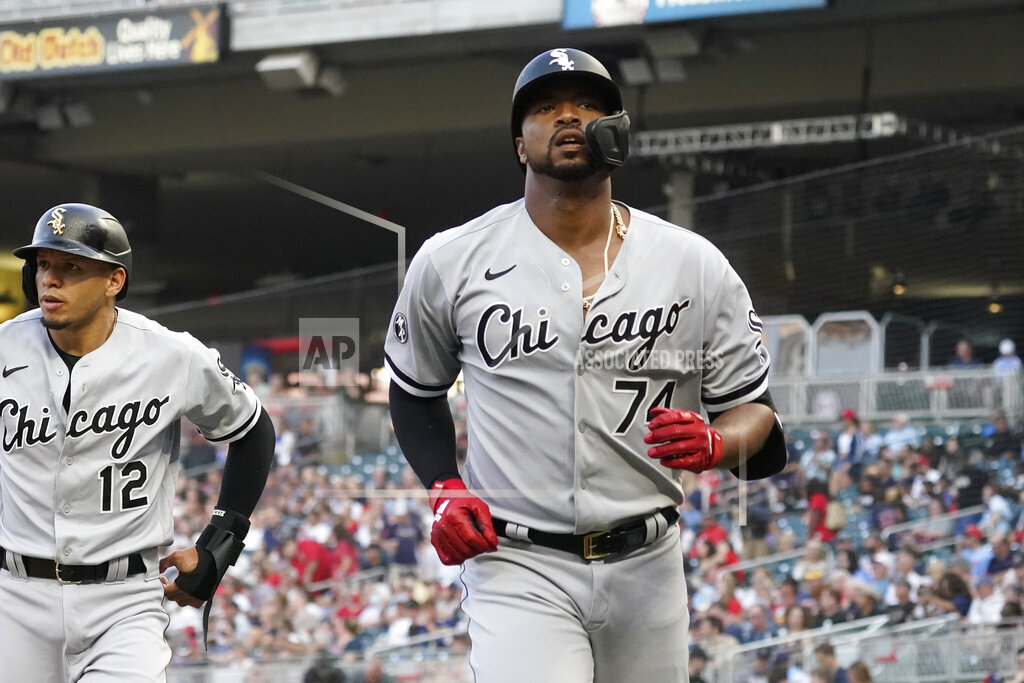 White Sox 11, Twins 1 – Jiménez again hits 2 home runs, White Sox rout Twins 11-1
Eloy Jiménez hit two homers with five RBIs for the second straight game, Tim Anderson led off with a home run for the second day in a row, and the Chicago White Sox cruised past the Minnesota Twins 11-1. Lucas Giolito pitched two-hit ball for eight innings as the White Sox won their fourth in a row. Luis Robert came off the 60-day injured list and delivered an RBI double and single. Jiménez became the first White Sox player with consecutive games of at least two homers and five RBIs, and the first in the majors since Bryce Harper for Washington in 2015. Jiménez has five homers and 14 RBIs in 10 games since his return from the injured list after rupturing a pectoral muscle in spring training.

Brewers at Cubs, PPD – Brewers-Cubs postponed due to rain; DH scheduled for Tuesday
The game between the Milwaukee Brewers and Chicago Cubs at Wrigley Field on Monday night was postponed because of rain. The game was called one hour, 38 minutes after the scheduled start. The contest has been rescheduled for today as part of a split doubleheader.

MLB – Former batboy sues Omar Vizquel alleging sexual harassment
A former minor league batboy has filed a lawsuit accusing longtime major league shortstop Omar Vizquel of sexual harassment during Vizquel’s tenure as manager of the Birmingham Barons, an affiliate of the Chicago White Sox. The 25-year-old man filed suit in U.S. District Court in Alabama accusing the 11-time Gold Glove winner of exposing himself multiple times and forcing the man to wash his back in the shower in 2019. The suit says the man is autistic and accuses the White Sox and Double-A Birmingham Barons of violating the Americans With Disabilities Act.

NHL/Winter Olympics – Lightning’s Cooper to coach Canada in Beijing if NHL plays
If NHL players are part of the Beijing Olympics in February, Canada will have a two-time Stanley Cup champion behind its bench. Hockey Canada says Tampa Bay Lightning coach Jon Cooper will be the head of its provisional Olympic coaching staff. Three NHL head coaches were named assistants — Boston’s Bruce Cassidy, Vegas’ Peter DeBoer and the New York Islanders’ Barry Trotz. Cooper led the Lightning to their second straight Stanley Cup title last month when they defeated the Montreal Canadiens in five games. NHL players were not part of the 2018 Pyeongchang Games after taking part in five straight Olympics. The schedule for the upcoming NHL season leaves room for an Olympic break, but the league says no decision has been made on whether players will compete. –

Olympics – Japan’s PM thanks people for safe Olympics during pandemic
Japan’s prime minister thanked people for helping the country safely hold the Olympics despite the difficulties of the coronavirus pandemic. He noted the Games were delayed by a year and held under tight restrictions, but “I believe we were able to fulfill our responsibility as the host nation,” Prime Minister Yoshihide Suga said, thanking the people for their understanding and cooperation. The 17-day Games were played mostly without spectators. Athletes stayed in an isolation bubble, quickly donned masks off their field of play and had to leave Japan soon after their competitions ended. But the games were a testament to perseverance and as Suga noted in praising Japanese athletes, "All their performances were moving.”

NCAAFB – Expanded playoffs means more games and … more injuries?
Few college football coaches know the mental and physical grind that comes with navigating an extended playoff better than Chris Klieman.The Kansas State coach was formerly at FCS juggernaut North Dakota State, where teams routinely play for national titles in a division where that means playing 15-plus games. Klieman says it’s a grind but you find a way to get through it when a title is on the line. The College Football Playoff is considering expanding from four to 12 teams to determine its champion, reserving six spots for the highest-ranked conference champions with the rest going to at-large selections.

NASCAR – Larson finally chases down Hamlin atop NASCAR standings
Denny Hamlin’s points lead in NASCAR’s Cup Series has finally vanished. With three races to go before the playoffs, he’s tied with Kyle Larson, giving the Cup series a dose of drama before the playoffs begin. Larson has a series-best five wins and Hamlin is still searching for his first after 23 races. The next race is Sunday on the road course at Indianapolis, where the series has never run. Then it’s on to Michigan and Daytona. Larson has won two road races this season and Hamlin is a three-time winner of the Daytona 500.