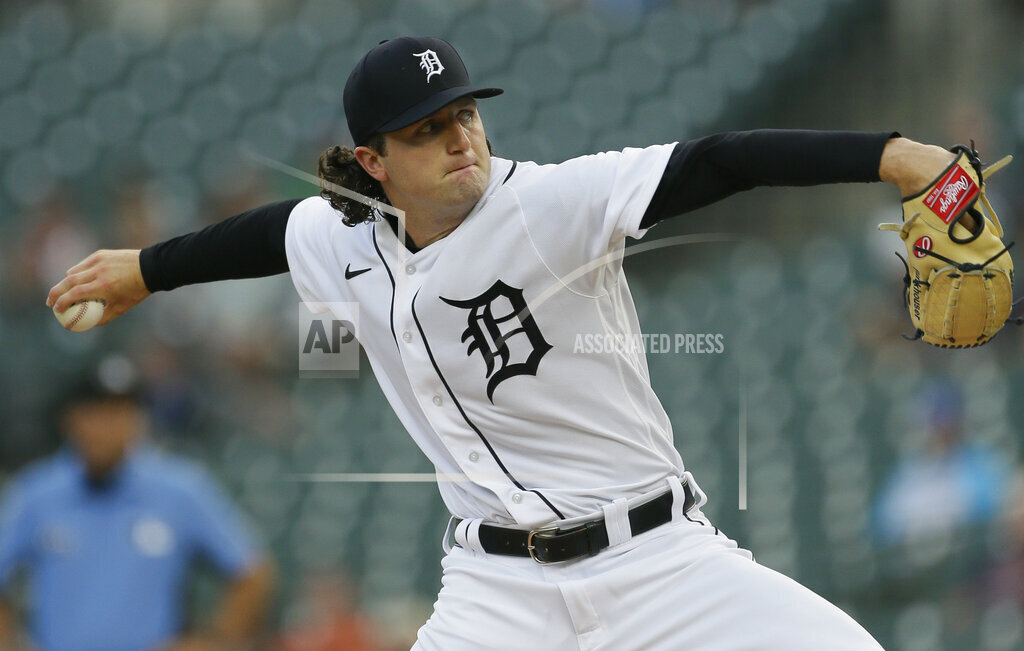 Tigers 14, Rangers 0 – Cabrera drives in 5 in Detroit’s 14-0 rout of Texas
Miguel Cabrera drove in five runs, including a bases-loaded double in a four-run fifth inning, and the Detroit Tigers went on to defeat the Texas Rangers 14-0. The Rangers have lost six straight, the last three by a combined score of 29-0. The last major league team to allow that many runs while being shut out in three straight games was the 1906 Brooklyn Superbas, who were outscored 31-0 between July 6-9. Akil Baddoo had four RBIs and scored three times.

Twins 3, White Sox 2/White Sox 5, Twins 3 – Sheets’ homer gives White Sox doubleheader split with Twins
Rookie Gavin Sheets hit a game-ending three run homer in the bottom of the seventh, giving the Chicago White Sox a 5-3 win over the Minnesota Twins in the second game of a doubleheader. Minnesota won the opener 3-2 in eight innings, but the White Sox avoided a sweep when Sheets turned on a 3-1 fastball from Twins ace José Berrios and drove it deep to right for his fifth home run. Berrios entered the seventh having allowed only two hits — solo shots by José Abreu and Yoán Moncada. Then Brian Goodwin led off with a single and Berrios hit Andrew Vaughn with a pitch. A wild pitch moved the runners up, and Sheets connected to win the game for Chicago.  In the first game Nelson Cruz homered and had an RBI sac fly giving the Twins a 3-2 win in the opening game of their doubleheader in 8 innings.

Cardinals 8, Cubs 3 – Carlson homers, drives in 4 runs as Cardinals beat Cubs 8-3
Dylan Carlson homered and drove in four runs, Jake Woodford pitched 5 2/3 strong innings in his first start of the season, and the St. Louis Cardinals beat the Chicago Cubs 8-3. Woodford, who was recalled from Triple-A Memphis prior to the game, struck out six and didn’t allow a walk. Carlson’s four RBIs tied a career high set earlier this season on April 7 against Miami. Only one of the five runs allowed by Cubs starter Alec Mills was earned.

NBA – History awaits: Bucks try to focus with championship chance
The Bucks are on the verge of making history as Milwaukee’s first NBA champion since 1971. But Giannis Antetokounmpo says the Bucks can’t think about what happens if they beat the Phoenix Suns on Tuesday night in Game 6. He says it’s hard but they can’t get ahead of themselves and have to stay in the moment. They have set up the potential party 50 years in the making by winning the last three games. The Suns are facing elimination for the first time in this postseason. But they are confident they can send the series back to Phoenix for Game 7 on Thursday.

NHL – Nashville prospect comes out as gay in NHL milestone
A Nashville Predators prospect has come out as gay. Luke Prokop posted on Twitter he is no longer scared to hide who he is. The 19-year-old Canadian was a third-round pick in the 2020 draft last fall. He is set to attend his first NHL camp after playing junior hockey last season in the Western Hockey League. Prokop says he hopes his example shows that gay people are welcome in the hockey community. No active NHL player has come out as gay. Las Vegas Raiders defensive end Carl Nassib in June became the first active NFL player to come out.

NFL – Coming off ACL tear, Barkley says little about Giants camp
Coming off an ACL injury that cost him most of last season, Saquon Barkley either doesn’t know or isn’t saying how much he will be able to do when the New York Giants report to training camp next week.  Speaking during a break at a youth football camp Monday, Barkley said he is continuing to rehabilitate his right knee and he is taking things day by day. The running back added he has not spoken with coach Joe Judge about how the team plans to use him in training camp. The Giants report to came July 27.

NFL – Raiders president Marc Badain resigns
Raiders team president Marc Badain has resigned just before the start of training camp after helping orchestrate the team’s move to Las Vegas.  Owner Mark Davis announced Monday that Badain is leaving the organization and that executive vice president and general counsel Dan Ventrelle will take over on an interim basis. Badain went from being a ball boy for the team to a 30-year career with the organization. He eventually became the chief financial officer for the team and was an assistant to former CEO Amy Trask.

NCAA – NIL – NIL era brings cautious optimism to college-town businesses
Small business owners in college towns across the country have new opportunities with athletes now allowed to profit from use of their name, image and likeness. Some businesses have already reached endorsement deals with athletes to promote their business. That includes a barbecue restaurant in Arkansas reaching deals with members of the Razorbacks offensive line from the football team. Other businesses are trying to get a better handle on the value of deals in a market that is less than a month old. Some are taking a wait-and-see approach and gathering details.

NCAA – NCAA hit hard by pandemic, spent $68 million on legal fees
The NCAA spent nearly $68 million on legal services during the fiscal year 2019-20, according to tax documents. NCAA revenue was down more than 50% over the previous year, from more than $1.1 billion to just over $520 million. That drop is blamed mostly on the cancellation of the men’s basketball tournament in 2020 due to the pandemic. Last month, the Supreme Court ruled against the NCAA in the association’s appeal of a federal court’s ruling in an antitrust case. Nearly $35 million of those legal expenses were spent on defense of the so-called Alston antitrust case.

Japanese PM Suga says world should see safe Olympics staged
Prime Minister Yoshihide Suga says the world needs to see that Japan can stage a safe Olympics. He spoke to Olympic officials in a closed-door meeting in Tokyo. Events start Wednesday and the formal opening  ceremony is scheduled for Friday. Tens of thousands of athletes, officials and workers are arriving in Japan amid a local state of emergency during the coronavirus pandemic. The postponed Olympics face opposition from many Japanese people. There will be no local or foreign fans at events. Suga says Japan "can bring success to the delivery of the Games” and this should be communicated to the world.

Women’s Basketball – Court of Arbitration for Sport rejects Ogwumike’s appeal
Nneka Ogwumike and Elizabeth Williams won’t be playing for Nigeria in the Olympics after the Court of Arbitration for Sport rejected their appeal. The WNBA players had asked the CAS to grant them a provisional allowance and add them to the roster until a hearing could occur. The pair had been notified last week by FIBA that their petition to play for the African nation had been denied because they played for the U.S. national program for too long.

Women’s 3 on 3 Basketball – Samuelson out after positive test
Katie Lou Samuelson is out of 3-on-3 basketball at the Olympics after contracting COVID-19 while training in Las Vegas. She’ll be replaced on the roster by Jackie Young, who played for the U.S. in a 3-on-3 training camp in 2020 and also competed in the event in the 2019 World Beach Games. Young joins Stefanie Dolson, Allisha Gray and her Las Vegas Aces teammate Kelsey Plum. Samuelson says in a statement that she’s fully vaccinated against the coronavirus and took every precaution.

Cycling – Tour de France riders head to Tokyo with Olympics in sight
Cycling is unusual among Olympic sports for holding its biggest, most prestigious event just before the Summer Games. The question facing some of the world’s best cyclists on the heels of the Tour de France is simple: Will they have incredible form following three tough weeks of racing or will all those miles leave their legs weary when they race again on Saturday in Tokyo? Some of the biggest stars of the Tour, including overall winner Tadej Pogecar of Slovenia and Belgian standout Wout van Aert, are due to line up at Musashinonomori Park this weekend.

Surfing – Female surfers overcome sexism’s toll to earn Olympic berth
Surfing and sexism have a long history. Women have been held back for centuries in the male-dominated sport that is now part of the Olympic roster for the upcoming Tokyo Games. Female surfers have faced mental, financial and logistical roadblocks. Today, they’re gaining parity in pay, equipment, surf conditions and event locations. But in terms of skill and experience, the damage caused by sexism has not yet been fully reversed.

Nobel Peace Prize winner says Olympics deserves the award
Nobel Peace Prize winner Muhammad Yunus says the Olympic movement deserves to win the award. The Bangladeshi banker says the games "has a very good case to establish itself as a candidate.” He cites North and South Korean athletes marching under one flag at the 2018 Winter Games to show the Olympics using sports to create peace. Yunus spoke ahead of receiving an Olympic award at the opening ceremony of thre Tokyo Games on Friday. China will host the 2022 Winter Olympics in Beijing. Activists have branded it the “Genocide Games” for its treatment of Muslim minority Uyghur people.