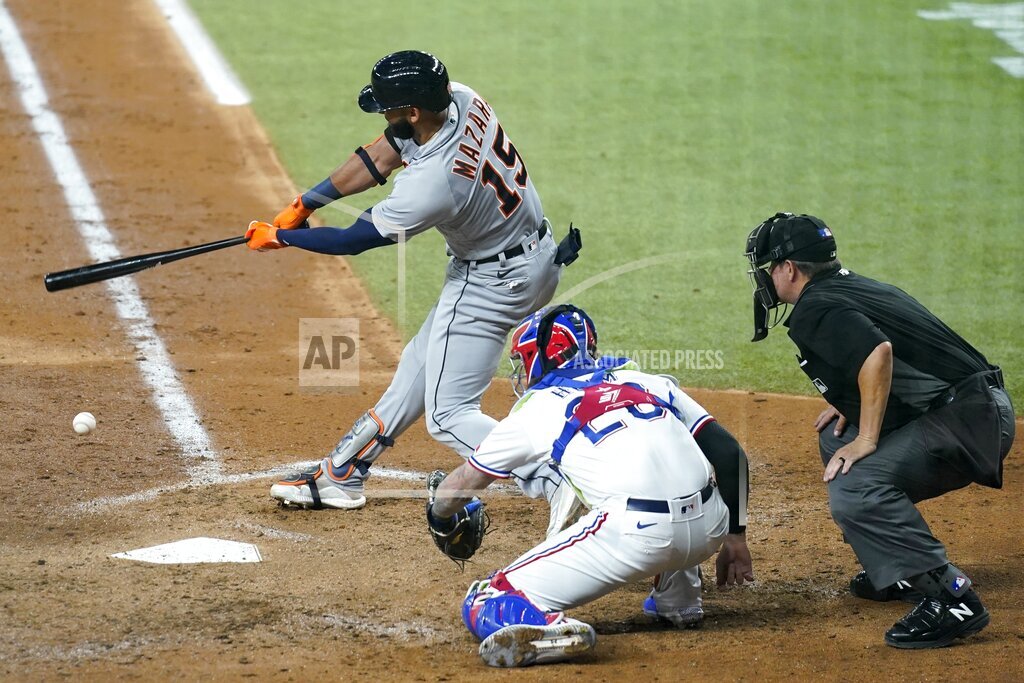 Tigers 7, Rangers 3 – Peralta 7 scoreless innings for Tigers in 7-3 win at Rangers
Wily Peralta had his longest big league outing since 2016 as the Detroit Tigers opened their series in Texas with a 7-3 win. Pertalta’s seven scoreless innings came in his fourth start for the Tigers. The 32-year-old right-hander went to spring training with them on a minor league deal. He hasn’t been a full-time starter in the majors since 2017. Rangers lefty Kolby Allard struck out a career-high nine in 5 1/3 innings. Two of the five runs against him were unearned. Zack Short hit a two-run homer and had a sacrifice fly for the Tigers.

Phillies 13, Cubs 3 – Phillies hand Cubs 10th straight loss with 13-3 romp
Odúbel Herrera hit a three-run homer, and the Philadelphia Phillies went deep five times while handing the Chicago Cubs their 10th straight loss with a 13-3 romp. Andrew Knapp, Didi Gregorius, Rhys Hoskins and Alec Brohm also connected. The Cubs remained winless since Zach Davies and three relievers combined to no-hit the Dodgers in Los Angeles on June 24. They also extended their worst losing streak since a 12-game slide in May 2012. Herrera’s drive against reliever Kohl Stewart capped a six-run eighth that broke open a 4-2 game. Knapp connected leading off the third and Gregorius added a solo shot against Davies in the fourth. Hoskins and Brohm went back to back in the ninth. Cubs manager David Ross was ejected in the 6th inning after arguing a walk by Cubs pitcher Rex Brothers.   It’s his 3rd ejection this season.

Canadiens 3, Lightning 2 – OT – Canadiens beat Lightning 3-2 in OT, avoid Stanley Cup sweep
Josh Anderson scored his second goal 3:57 into overtime, and the Montreal Canadiens avoided elimination by defeating the defending champion Tampa Bay Lightning 3-2 in Game 4 of the Stanley Cup Final. Pat Maroon and Barclay Goodrow scored for the Lightning who are attempting to become the NHL’s second team to win consecutive titles in the NHL’s salary-cap era. The series shifts to Tampa Bay for Game 5 on Wednesday night.

NHL – Jackets netminding prospect dies
Columbus Blue Jackets goaltender Matiss Kivlenieks died of chest trauma from an errant fireworks mortar blast in what authorities described as a tragic accident on the Fourth of July. Police in Novi, Michigan, say the firework tilted slightly and started to fire toward people nearby. The 24-year-old Kivlenieks was in a hot tub and tried to get clear with several other people. Authorities had earlier said the Latvian died of an apparent head injury during a fall. An autopsy clarified the cause of death. Blue Jackets president of hockey operations John Davidson called it a “devastating time” for the team.

NFL – QB Trevor Lawrence signs $36.8M rookie contract with Jags
Jacksonville Jaguars quarterback and No. 1 overall pick Trevor Lawrence signed his four-year rookie contract Monday. It clears the way for him to attend the start of training camp in three weeks. Lawrence’s deal was projected to be worth $36.8 million under the NFL’s rookie slotting system. It includes a $24.1 million signing bonus. He will count $6.7 million against the salary cap in 2021. With Lawrence under contract, Jacksonville has now signed six of its nine draft picks. Running back Travis Etienne, cornerback Tyson Campbell and offensive tackle Walker Little remain unsigned.

USA Soccer – US women defeat Mexico 4-0 in final tune-up before Olympics
Tobin Heath scored her second goal in as many games and the United States beat Mexico 4-0 in East Hartford, Connecticut, in the American women’s final match before the Olympics. The United States is undefeated in 44 straight matches, the second-longest unbeaten streak in team history. The Americans also extended their winning streak against Mexico to 15 games and improved to 39-1-1 overall. The lone U.S. loss in the series was in a 2010 World Cup qualifier. Next up for the United States are the Tokyo Olympics. The Americans play Sweden on July 21.

Tennis – Federer, Djokovic advance
Roger Federer and Novak Djokovic have combined to win 39 Grand Slam titles. The possibility of them meeting in the Wimbledon men’s final remains strong following fourth-round wins by both players.  Federer became the oldest man in the Open era to reach the Wimbledon quarterfinals by beating Lorenzo Sonego in straight sets, 7-5, 6-4, 6-2. The eight-time Wimbledon champ needed two attempts to serve out the first set but never looked threatened after that.  It is the 18th time Federer has gone this far at the All England Club, extending his own record as he seeks his 21st Grand Slam title.  Djokovic reached his 50th Grand Slam quarterfinal by outplaying Christian Garin of Chile 6-2, 6-4, 6-2. The top-ranked Serb and two-time defending champ lost just three points on his first serve in the match and saved the only two break points he faced. Djokovic is in line for his record-tying 20th Grand Slam title and sixth at Wimbledon.

Olympics – Tokyo Games still weigh limits on fans — if any fans at all
The Tokyo organizing committee has signaled that it will change its ticket policy this week for any local fans hoping to attend the Tokyo Olympics. Organizers and the International Olympic Committee are expected to meet this week to announce the move because of the fast-changing coronavirus situation. Fans from abroad were banned months ago. Two weeks ago organizers, the IOC, and others agreed to allow stadiums to be filled to 50% capacity with a ceiling of 10,000. Also, basketball player Rui Hachimura and wrestler Yui Susaki will be the flagbearers from Japan at the Tokyo Olympics that open in just under three weeks. This was announced by the Japanese Olympic Committee. Hachimura plays for the NBA’s Washington Wizards.

USA Basketball – US women’s hoops program director stepping down after Tokyo
USA Basketball women’s national team director Carol Callan will step down after the Tokyo Olympics to focus on her role as the president of FIBA Americas. Callan has been with the national team since 1995 and has worked behind the scenes to help the U.S. win six consecutive Olympic gold medals. She was the person who made the call to players to let them know if they made a USA Basketball team. She also was in charge of the logistics whenever a team would travel to a tournament or training camp.