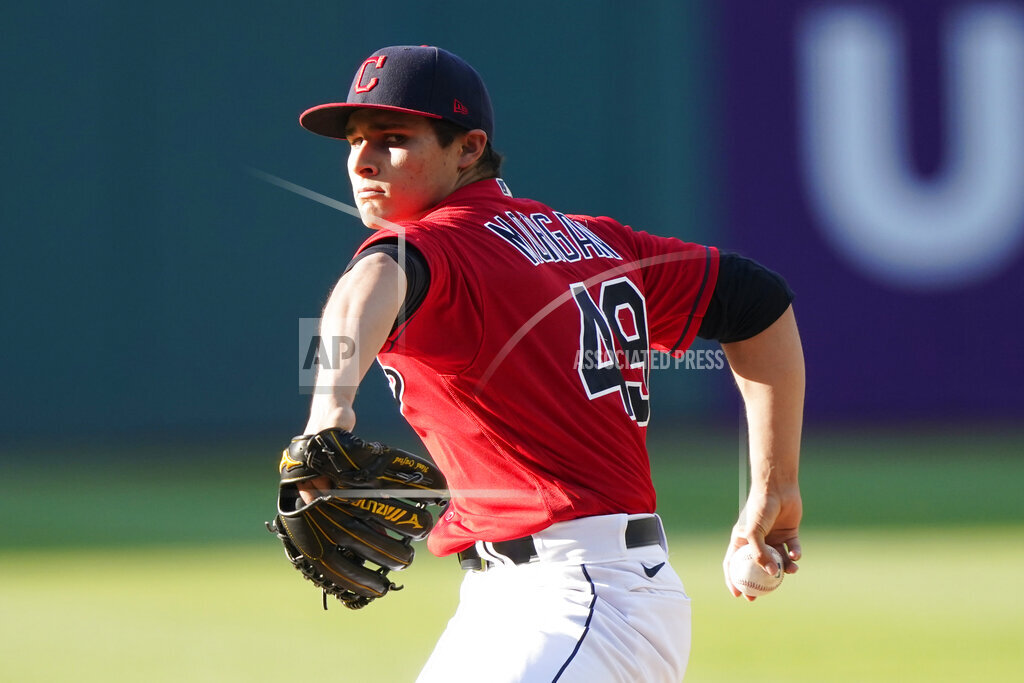 Indians 13, Tigers 5 – Ramírez’s 5 RBIs help Indians shake off injury, rout Tigers
José Ramírez homered and drove in five runs, Austin Hedges had a two-run shot and the Cleveland Indians bounced back from losing outfielder Josh Naylor to a grisly injury a day earlier by belting the Detroit Tigers 13-5. Ramírez connected in the fourth inning off rookie Matt Manning as the Indians set season highs in runs and hits. Hedges had three RBIs and Amed Rosario had three hits for Cleveland, which pulled within two games of AL Central-leading Chicago. Detroit’s Miguel Cabrera connected for his 493rd homer, tying him with Lou Gehrig and Fred McGriff for 28th on the career list.

Brewers 14, Cubs 4 – Brewers score 10 in 8th, beat Cubs 14-4 for 6th straight win
Willy Adames and Keston Hiura each hit a three-run homer during a 10-run outburst in the eighth inning that lifted the Milwaukee Brewers a 14-4 victory over the Chicago Cubs. The Brewers earned their sixth consecutive victory to extend their NL Central lead over the Cubs to four games. Avisaíl García homered and drove in three runs for the Brewers. Jace Peterson went 3 for 4 and scored three runs. Hiura had two hits and four RBIs. Ian Happ and Patrick Wisdom each hit a two-run homer for the Cubs.

Twins at White Sox – PPD – Twins-White Sox series opener postponed by rain
The opener of a scheduled four-game series between the Minnesota Twins and the Chicago White Sox was postponed because of rain. The teams will play a doubleheader on July 19. Barring future postponements, the doubleheader will be the seventh of the season for Chicago and fourth for Minnesota. The Twins had a game against Cleveland postponed on Saturday. Chicago right-hander Lucas Giolito and Minnesota right-hander Kenta Maeda had been scheduled to pitch Monday. They are now set for Tuesday.

Clippers 116, Suns 108 – Gritty Clippers stave off elimination, beat Suns 116-102
Paul George scored 41 points, Reggie Jackson added 23 and the resilient Los Angeles Clippers staved off elimination by beating the Phoenix Suns 116-102 in Game 5 of the Western Conference finals. The short-handed Clippers were playing without two-time Finals MVP Kawhi Leonard and center Ivica Zubac, who missed his first game of the season with an MCL sprain in his right knee. They’ve already fought through two grueling series wins in these playoffs, coming back from 2-0 deficits to beat both the Dallas Mavericks and Utah Jazz. Now they’re trying to claw back against the Suns. Game 6 is on Wednesday in Los Angeles.

NCAABSB – Big 1st inning sends Vandy past MSU 8-2 in CWS finals opener
Vanderbilt gave Jack Leiter a big early lead and went on to an 8-2 victory over Mississippi State in Game 1 of the College World Series finals to move within a win of a second straight national championship. The Commodores scored seven runs off Christian MacLeod and Chase Patrick in the first inning Monday night. McLeod struggled for a second straight CWS start and got only two outs in the bottom half. Leiter allowed two runs and three hits and struck out eight in six innings.

Lightning 5, Canadiens 1 – Kucherov leads Lightning over Canadiens 5-1 in Game 1
Playoff scoring leader Nikita Kucherov had two goals and an assist and Andrei Vasilevskiy finished with 18 saves to outplay Carey Price and lead the Tampa Bay Lightning to a 5-1 victory over the Montreal Canadiens in Game 1 of the Stanley Cup Final. Kucherov put the defending champs up 3-1 two minutes into the third period. He scored again at 11:25 of the third, then assisted on Steven Stamkos’ power-play goal that made it 5-1 with just over a minute to go. The Canadiens had not given up a power-play goal in an NHL playoff-record 13 consecutive games. Game 2 is Wednesday night in Tampa.

NHL – Bettman casts doubt on NHL players going to Beijing Olympcs
NHL Commissioner Gary Bettman says time is running out to reach a deal to send players to the 2022 Winter Olympics in Beijing. The league, players, International Olympic Committee and International Ice Hockey Federation continue to negotiate. Bettman and deputy commissioner Bill Daly cast doubt given the pandemic and potential disruption to next season. The league also announced it will hold All-Star Weekend in Las Vegas and outdoor games in Minneapolis and Nashville next season.

NHL – Blackhawks hire outside firm to investigate sex abuse claims
The Chicago Blackhawks have hired a former federal prosecutor to conduct an independent review of allegations that a former player was sexually assaulted by a then-assistant coach in 2010. CEO Danny Wirtz announced the move in an internal memo obtained by The Associated Press. Two recent lawsuits have been filed against the team. They include allegations that assistant coach Bradley Aldrich assaulted at least one player during the team’s run to the 2010 Stanley Cup title.

Martyl Reinsdorf, wife of Bulls, White Sox chairman, dies
Martyl Reinsdorf, the wife of Chicago Bulls and White Sox chairman Jerry Reinsdorf, has died. She was 85. The two teams announced she died Monday at her home in Paradise Valley, Arizona, following a lengthy illness. Martyl Reinsdorf designed five of the Bulls’ six NBA championship rings as well as the White Sox’s 2005 World Series ring. Known as “Grandma Martyl,” she also created and distributed more than one million coloring books, crayons, markers and toys to hospitals, orphanages and shelters around the world.

Tennis – Djokovic wins as Wimbledon ends hiatus
There was a return to normalcy at Wimbledon on Monday, 102 weeks since a meaningful match was last played there.  Fans were back in the stands at Old England Club following the cancellation of last year’s tournament due to the pandemic.  The first winner on Centre Court was top seed and defending champion Novak Djokovic, who fired 25 aces in a 4-6, 6-1, 6-2, 6-2 victory over 19-year-old wild-card entry Jack Draper.

US Olympic basketball roster is long on experience
USA Basketball has announced its men’s roster for the Tokyo Olympics, with five of the 12 players already in their 30s. Thirty-somethings Kevin Love, Kevin Durant, Jrue Holiday, Damian Lillard and Draymond Green make it the oldest roster in team history.  The U.S. also has gotten commitments from Bam Adebayo, Bradley Beal, Devin Booker, Jerami Grant, Zach LaVine, Khris Middleton and Jayson Tatum to play on the team.  Booker, Middleton and Holiday are the only players currently in the NBA’s conference finals.