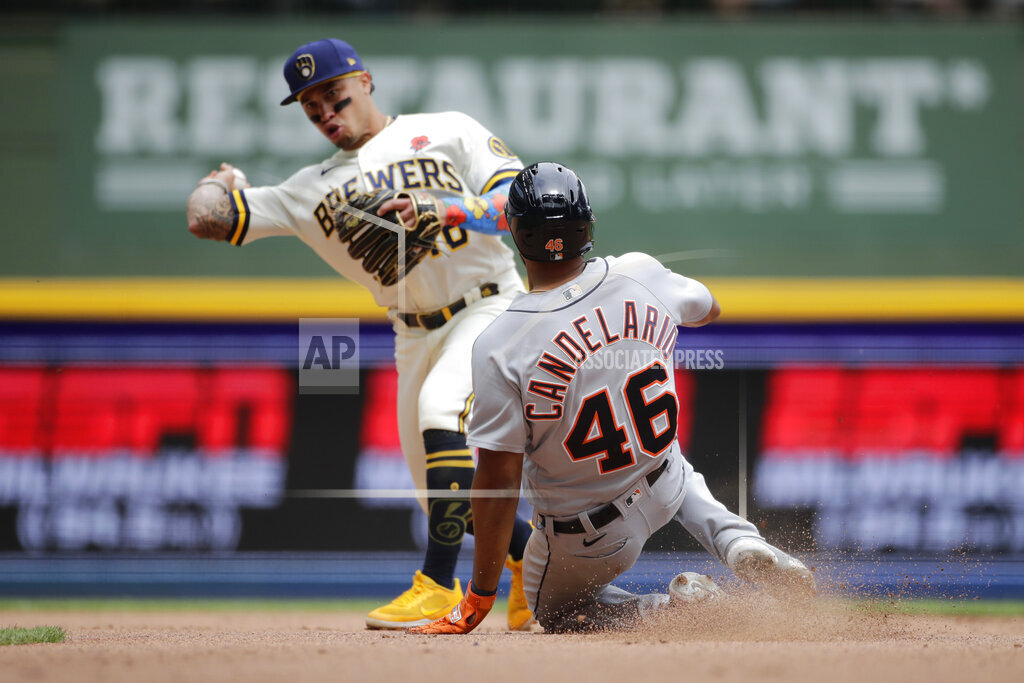 Brewers 3, Tigers 2 – F/10 – Brewers edge Tigers 3-2 in 10 innings for 5th straight win
Luis Urías hit a shot that bounced over the wall and brought home Omar Narváez with the winning run in the 10th inning as the Milwaukee Brewers edged the Detroit Tigers 3-2. The Brewers won their fifth straight and snapped the Tigers’ three-game winning streak. The Tigers were starting a six-game road trip after posting their first home sweep of the New York Yankees since 2000. Willy Adames hit a two-run homer for the Brewers. Akil Baddoo had tying solo homer for the Tigers in the seventh.

Cubs 7, Padres 2 – Báez goes deep twice as Stewart, Cubs beat Padres 7-2
Javier Báez and Patrick Wisdom each homered twice, helping Kohl Stewart and the Chicago Cubs beat the San Diego Padres 7-2. Pressed into action after Trevor Williams had an appendectomy Sunday morning, Stewart pitched five innings of one-run ball in his first major league win since July 21, 2019, for Minnesota. Kris Bryant also went deep as Chicago won for the seventh time in eight games. San Diego dropped to 4-4 on its 10-game road trip. Fernando Tatis Jr. hit his 16th homer and Wil Myers drove in a run, but that was it for the Padres.

MLB – Cubs place RHP Williams on IL, recall Stewart to start
The Chicago Cubs have placed right-hander Trevor Williams on the 10-day injured list, adding another name to their long list of injured players. Williams was scheduled to start Monday against San Diego, but he had an appendectomy Sunday. Kohl Stewart was recalled from Triple-A Iowa to take Williams’ turn against the Padres. Despite a rash of injuries, the Cubs won 12 of 16 heading into the series with San Diego. Williams, Jason Heyward, Jake Marisnick, Nico Hoerner, Matt Duffy, Alec Mills and Justin Steele have gone on the IL since May 10.

Olympics – US men miss qualifying for Olympic 3-on-3 basketball debut
The 3-on-3 street version of basketball makes its Olympic debut in Tokyo but the United States men’s team won’t be there. The U.S. has lost to the Netherlands in the quarterfinals of an Olympic qualifying tournament in Austria that offered three tickets to the eight-team lineup at the games. The Americans were world champions in 2019 and had former NBA players Dominique Jones and Robbie Hummel on a four-player roster for the qualifying event.  The Dutch were joined by Latvia and Poland in the men’s Olympic lineup. The U.S. women did advance to the Olympics with France and Japan.

Tennis – Federer wins in first major match in 16 months
Roger Federer has made a winning return to Grand Slam tennis after 16 months away. Federer’s first match at a major tournament since the 2020 Australian Open ended with a 6-2, 6-4, 6-3 victory over qualifier Denis Istomin at the French Open. Federer, who turns 40 in August, had two operations on his right knee last year. Also today, American Sofia Kenin broke a four-match losing streak on clay and won her opening match at the French Open by beating 2017 champion Jelena Ostapenko, 6-4, 4-6, 6-3.

Tennis – Osaka: Withdrawing from French Open would be best
Naomi Osaka says she thinks withdrawing from the French Open would be “the best thing for the tournament” and for her own well-being. The four-time Grand Slam champion and former No. 1-ranked player says on Twitter that by pulling out, “everyone can get back to focusing on the tennis going on in Paris.” Osaka’s tweet comes a day after she was fined $15,000 for skipping the postmatch news conference following her first-round victory. She was also warned that she could face stiffer penalties, including disqualification or even suspension, if she continues to avoid the media.

Tennis – Tennis stars, others lend support to Naomi Osaka
Naomi Osaka withdrew from the French Open on Monday and wrote on Twitter that she would be taking a break from competition, a dramatic turn of events for a four-time Grand Slam champion who said she experiences “huge waves of anxiety” before speaking to the media and revealed she has “suffered long bouts of depression.” Osaka’s agent, Stuart Duguid, confirmed in an email to The Associated Press that the world’s No. 2-ranked tennis player was pulling out before her second-round match at the clay-court tournament in Paris.

Division 3 at Centreville (1st round at local sites)
Constantine at Parchment, 5:00 p.m.