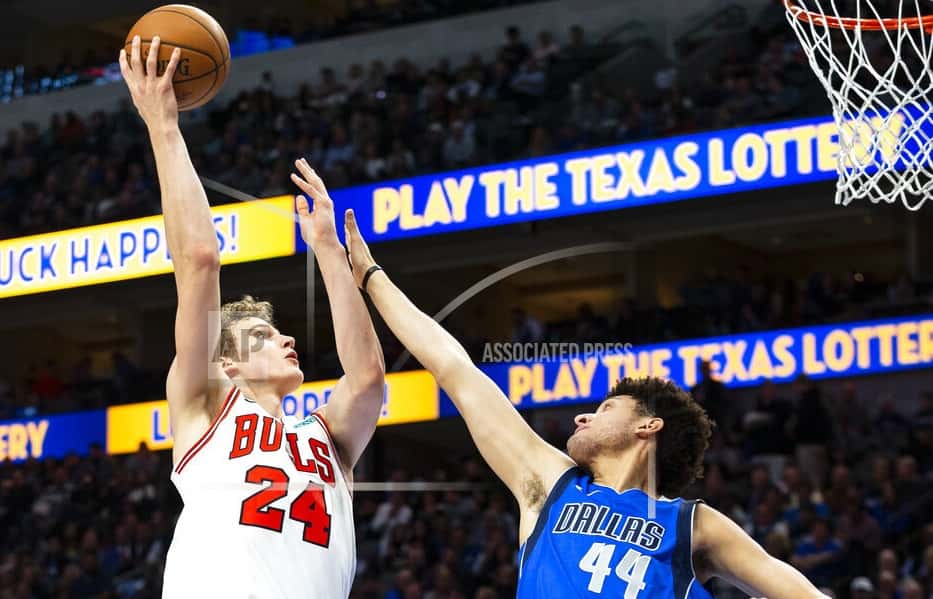 NBA
Dallas 118, Chicago 110
Luka Doncic scored 21 of his 38 points in the third quarter to lead the Dallas Mavericks past the Bulls 118-110. Doncic also finished with 11 rebounds and 10 assists for Dallas. It was his NBA-leading 11th triple-double of the season. Lauri Markkanen scored 26 points for the Bulls, who lost Wendell Carter Jr. to an apparent ankle injury. Doncic scored 17 of the Mavs’ 19 points in the final 5:35 of the third quarter to break open what had been a tie game. Chicago has lost four in a row and five of their last six.

Indiana 115, Charlotte 104
T.J. Warren scored 30 of his season-high 36 points in the second half, and the Indiana Pacers beat the Charlotte Hornets 115-104. The Pacers snapped a two-game skid and had lost four of their last five. Domantas Sabonis added 18 points, 12 rebounds and seven assists, and Miles Turner had 15 points and nine rebounds for the Pacers. Indiana is 15-4 at home and improved to 8-10 on the road. Terry Rozier had 28 points for the Hornets, whose two-game win streak ended.

NHL
The Red Wings and Blackhawks were off

Off the field…
Alabama quarterback Tua Tagovailoa says is entering the NFL draft. Tagovailoa was projected as a potential No. 1 overall pick before suffering a hip injury Nov. 16 against Mississippi State.

Wisconsin’s top receiver is joining its top running back and leaving for the NFL. Quintez Cephus is skipping his senior season to enter the NFL draft.

BASEBALL
The Tigers have avoided arbitration with Michael Fulmer, agreeing to a $2.8 million, one-year deal with the right-hander after he missed all of last season following Tommy John surgery. It’s the same amount Fulmer received last year when he lost his arbitration case with the Tigers. Fulmer won Rookie of the Year honors for Detroit in 2016 and won 10 games in 2017. But he struggled in 2018, and that season ended early for him because of a right knee injury. Then came last year’s elbow problems, which ended his season before it started. Fulmer turns 27 on March 15.

Left-hander Dallas Keuchel’s $20 million option for 2023 in his contract with the Chicago White Sox would become guaranteed if he pitches 320 regular-season innings in 2021-22 combined, including at least 160 in 2022. He also must pass a physical at the end of the 2022 season. Keuchel’s $55.5 million, three-year deal calls for salaries of $18 million in each of the next three seasons and a $20 million team option for 2023 with a $1.5 million buyout. Including the option, the contract would be worth $74 million over four years. He has a full no-trade provision through Oct. 31.