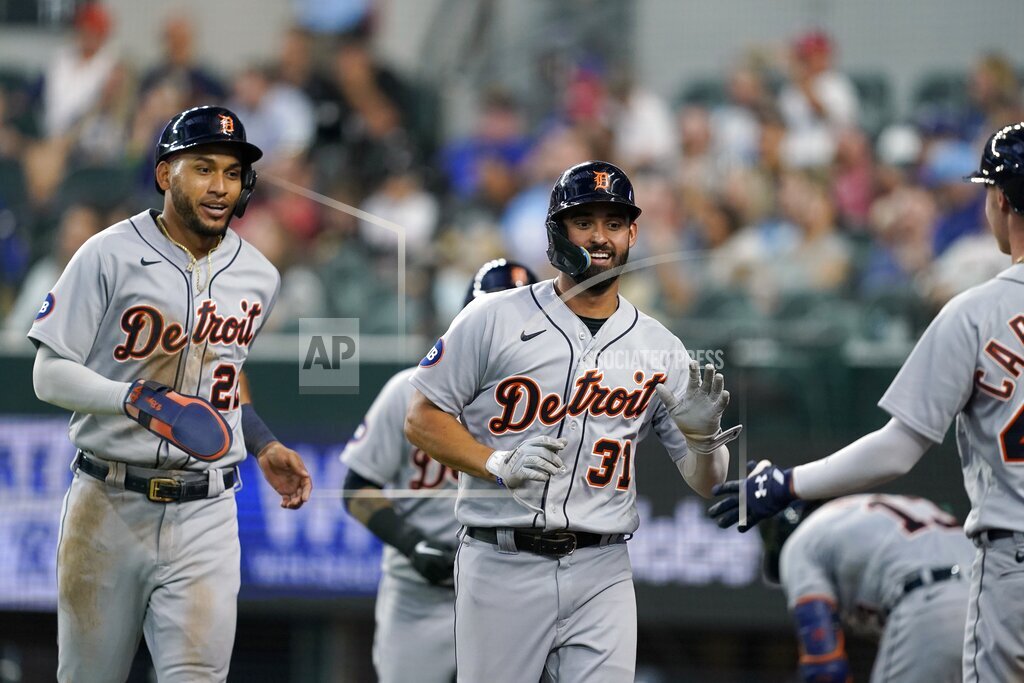 Tigers 9, Rangers 8 – Garcia’s hit streak ends at 23, Rangers fall to Tigers
Adolis Garcia struck out during a Texas rally that fell short in the ninth inning, ending his 23-game hitting streak as the Detroit Tigers held off the Rangers 9-8. Garcia’s streak was the longest in the American League this season. He went 0 for 3 with two walks and fell one game short of matching the longest hitting string ever by a Cuban-born big leaguer, set by Rafael Palmeiro in 1994 for Baltimore. Harold Castro drove in five runs as the Tigers built a 9-0 lead in the sixth. Corey Seager homered twice for Texas. Detroit took a 9-2 lead into eighth before Garcia had an RBI groundout and Kole Calhoun hit a two-run homer. After Texas closed to 9-8 in the ninth, Garcia fanned with a runner on second.

D’Backs 3, White Sox 2 – Diamondbacks down scuffling White Sox 3-2 to finish sweep
Jake McCarthy hit a tiebreaking double in the ninth inning and the Arizona Diamondbacks completed a three-game sweep of the struggling Chicago White Sox with a 3-2 victory. Diamondbacks rookie Stone Garrett launched his first major league home run and Sergio Alcántara also went deep for Arizona, which earned its first interleague sweep since 2019. Noé Ramirez pitched a scoreless eighth and Ian Kennedy got three outs for his ninth save. Kendall Graveman took the loss in relief of Dylan Cease, who allowed Arizona’s two solo homers while striking out eight in a career-high eight innings. Alcántara hit his fourth homer of the season in the eighth to tie it at 2.

Steelers 19, Lions 9 – Trubisky makes case for QB job as Steelers top Lions 19-9
Mitch Trubisky staked his claim to be the Pittsburgh Steelers starting quarterback, throwing for 160 yards and a touchdown in a 19-9 win over Detroit in the NFL’s preseason finale. Trubisky was at his best late in the first half, leading the Steelers on a 92-yard drive that ended with a 6-yard touchdown pass to Steven Sims. Rookie Kenny Pickett played well in the second half for Ptitsburgh but it appears Trubisky has the inside track to be the starter when the Steelers begin the regular season in Cincinnati on Sept. 11.

Sun 68, Sky 63 – Bonner scores 15 as Sun beat Sky in Game 1 of WNBA semis
DeWanna Bonner had 15 points and nine rebounds to lead the Connecticut to a 68-63 win over the Chicago Sky in Game 1 of their WNBA semifinals series. Jonquel Jones scored 12 points and also grabbed nine rebounds for the Sun, Alyssa Thomas had 12 points, 10 rebounds and seven assists, and Brionna Jones added 12 points. Candace Parker had 19 points and 18 rebounds for the Sky, and Kahleah Copper scored 13 points on 5-for-10 shooting.
LLWS – Hawaii wins Little League title, beating Curacao 13-3
Hawaii got back-to-back homers from Kekoa Payanal and Kama Angell in the first inning, sparking a 13-3 win in just four innings Sunday over Curacao in the championship of the Little League World Series. The LLWS title is Hawaii’s fourth. It won in 2018 and this same Honolulu team finished third last year, when COVID-19 travel restrictions prevented international teams from participating. Hawaii starter Jaron Lancaster was dominant once again as he threw all four innings, while only allowing three runs, three hits and striking out 10 Curacao hitters.

NASCAR – Dillon, Blaney nab last playoff spots at rain-soaked Daytona
Austin Dillon avoided a massive wreck in the rain to win at Daytona International Speedway and snag a playoff spot in the Cup Series’ regular-season finale. Dillon passed Austin Cindric for the lead with three laps to go after a 3 hour, 20 minute red flag for inclement weather. It was an aggressive move that capped a drama-filled race. Martin Truex Jr. was the biggest loser. Truex looked like he would secure the final postseason berth when the skies opened up, but he faded once the race restarted and allowed Ryan Blaney to make up ground in a wild points scramble.

Tennis – US Open – Williams sisters to face Czech pair in US Open doubles
Serena and Venus Williams were drawn to face the Czech pair of Lucie Hradecka and Linda Noskova in the first round of doubles at the U.S. Open.The U.S. Tennis Association announced the doubles brackets Sunday, a day before the tournament begins.Doubles competition will begin on Wednesday.It is the first doubles event for the Williams sisters together since the 2018 French Open. They have won 14 Grand Slam championships in in doubles as a team, most recently at Wimbledon inn 2016.Two of their doubles titles came at the U.S. Open, in 1999 and 2009.Hradecka is a 37-year-old who won two major doubles trophies with Andrea Hlavackova — at the 2013 U.S. Open and 2011 French Open. Noskova is a 17-year-old who never has won a Grand Slam match in singles or doubles.

NCAAFB – Free beer was right call at Dublin game says catering firm
In the postgame analysis, free beer at the Nebraska-Northwestern game in Ireland was the right call. The freebies flowed for two hours during Northwestern’s 31-28 victory on Saturday, and the catering company for Aviva Stadium hailed its workers for keeping the refreshments coming. Levy UK + Ireland said Sunday the problem was with its payment provider, SumUp, and not with the stadium’s internet connection. Levy, a sports and hospitality caterer whose other clients include English Premier League soccer clubs, did not give an estimate of lost revenue.

Golf – PGA – McIlroy storms from 6 back to win FedEx Cup and $18 million
Rory McIlroy is the FedEx Cup champion for the third time. He stormed from a record-tying six shots behind to win the Tour Championship and capture the $18 million prize. Scottie Scheffler never trailed all week until the 70th hole. He built the six-shot lead Sunday morning with four birdies in six holes to complete the third round. But he was never on his game and made only one birdie in a round of 73. McIlroy shot a 66. He says winning felt even more significant because of the tumultuous year caused by Saudi-funded LIV Golf.

Cycling – Kenyan cyclist dies in crash during gravel race in Vermont
Kenyan cyclist Sule Kangangi has died in a crash during a gravel race in Vermont. Kangangi was competing in the Vermont Overland race on Saturday when he died in a crash at high speed. The wife of president-elect William Ruto of Kenya posted on Twitter that she was shocked to learn the sad news that he had passed away after a tragic crash. Rachel Ruto wrote: “We will all miss him as an individual. Kenya has lost a champion. Rest in peace Sule.” The Vermont Overland is a 59-mile dirt road bicycle race that includes nearly 7,000 feet of climbing.