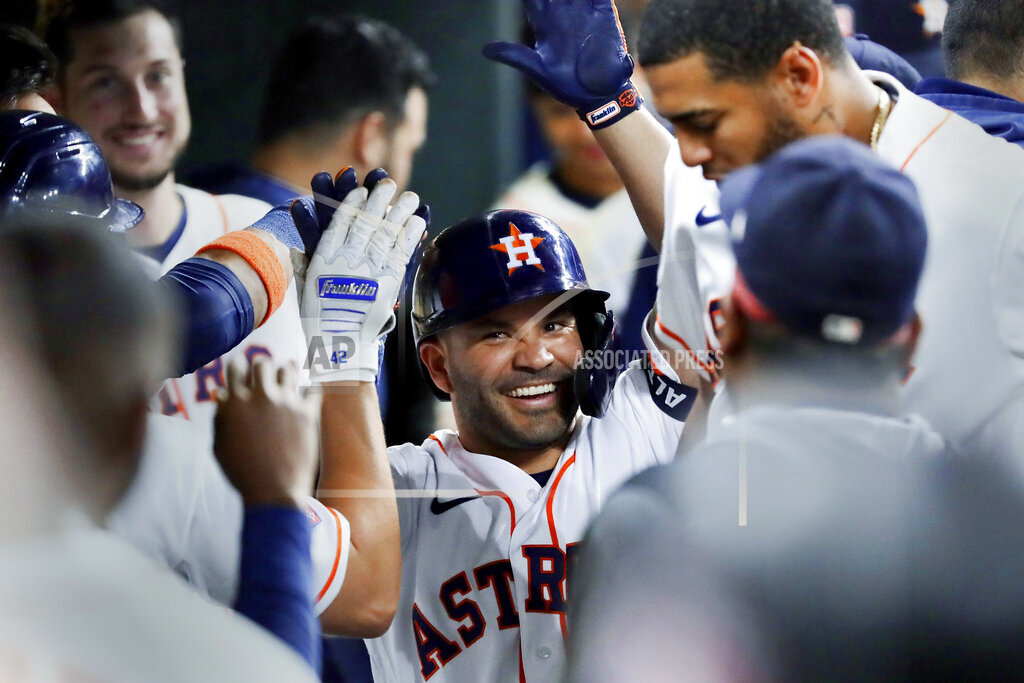 Astros 3, Tigers 2 – Tucker’s RBI in 9th lifts Astros to 3-2 win over Tigers
Jose Altuve and rookie Jeremy Peña hit solo homers and Kyle Tucker’s RBI single in the ninth inning lifted the Houston Astros to a 3-2 win over the Detroit Tigers. Yordan Alvarez singled off Gregory Soto with no outs in the ninth and was replaced by pinch-runner Chas McCormick. Yuli Gurriel walked before Tucker singled on a groundball to center field to score McCormick and give Houston its fourth straight victory. Tucker’s hit helped the Astros bounce back after closer Ryan Pressly blew the save in the top of the inning in his return from the injured list.

MLB – White Sox place Vaughn on 10-day IL with bruised right hand
The Chicago White Sox have placed outfielder Andrew Vaughn on the 10-day injured list because of a bruised right hand. Vaughn has not played since he was struck by a pitch from Los Angeles Angels right-hander Mike Mayers last week. He is batting .283 with four home runs and a team-leading 12 RBIs in 16 games. The White Sox also recalled infielder Danny Mendick from Triple-A Charlotte. The White Sox have won three straight. They open a three-game series at Boston on Friday.

NHL – Bettman says Quenneville hasn’t approached NHL about return
If three-time Stanley Cup winner Joel Quenneville is looking to return to coaching next season, he hasn’t told NHL Commissioner Gary Bettman of that plan. And Bettman would certainly be in the loop on that news. Quenneville resigned as Florida’s coach back in October when specifics of how the Chicago Blackhawks mishandled allegations that a player was sexually abused by an assistant coach there in 2010 during the team’s run to the Stanley Cup that season. Quenneville was Chicago’s head coach when the abuse occurred. Part of the NHL-imposed conditions surrounding any plan Quenneville has to return to the league will be approval from Bettman.

NBA – Ben Simmons has successful back surgery, Nets announce
Ben Simmons underwent what was determined to be a successful back surgery in Los Angeles. The Brooklyn Nets are hoping that he is fully recovered before the start of training camp this fall. Simmons will need about three weeks for an “initial recovery period,” the Nets say, before he can start his rehabilitation program. The procedure Simmons had was called a microdiscectomy, in which a small fragment of a herniated disc is removed to relieve pressure on the spinal column. Training camp will start in late September.

NFL – Cowboys’ Jerry Jones ‘home and fine’ after reported crash
Dallas Cowboys owner Jerry Jones is “home and fine” a day after a report that he was involved in a traffic accident and taken to a hospital as a precaution. The update comes from Stephen Jones, who is the owner’s son and an executive vice president for the Cowboys. Dallas TV station WFAA cites anonymous Dallas police sources in a report that Jerry Jones was involved in a crash Wednesday night near downtown Dallas. The station reports emergency crews were summoned, and the 79-year-old sustained minor injuries.

Golf – PGA – Day leads thru 18 at Avenel
Jason Day shot a 7-under 63 to take the first-round lead at the Wells Fargo Championship. Day has been tinkering with his swing in an effort to end a four-year victory drought on the PGA Tour. Joel Dahmen was a shot back on what could be the best day for scoring at TPC Potomac at Avenel Farm, with rain, wind and unseasonably cool temperatures in the forecast through Sunday. Matthew Wolff, local favorite Denny McCarthy and PGA Tour rookies Aaron Rai, Callum Tarren and Paul Barjon are two shots back.

WNBA – BH’s Gondrezick cut from Chicago Sky roster
Benton Harbor native Kysre Gondrezick was cut from the roster of the defending WNBA Champion Chicago Sky prior to the start of the 2022 WNBA season.   Gondrezick was the 4th overall pick by the Indiana Fever a year ago, but played sparingly before the Olympic break.  She did not return to the team after the games citing personal reasons.  Gondrezick was officially waived by Indiana in January, but signed a contract to attend Chicago’s training camp in February.   She was waived again on Wednesday.

NCAA – As leaders lobby, NCAA searches for ways to rein in boosters
College sports leaders visited Capitol Hill, asking lawmakers to consider rules to govern name, image and likeness money for college athletes. Greg Sankey of the SEC and George Kliavkoff of the Pac-12 were scheduled to meet with lawmakers on both sides of aisle. The NCAA is trying to clarify existing rules to prevent boosters from being involved in recruiting. College sports leaders are skeptical about the NCAA’s ability to crack down in so-called collectives founded by wealthy boosters.