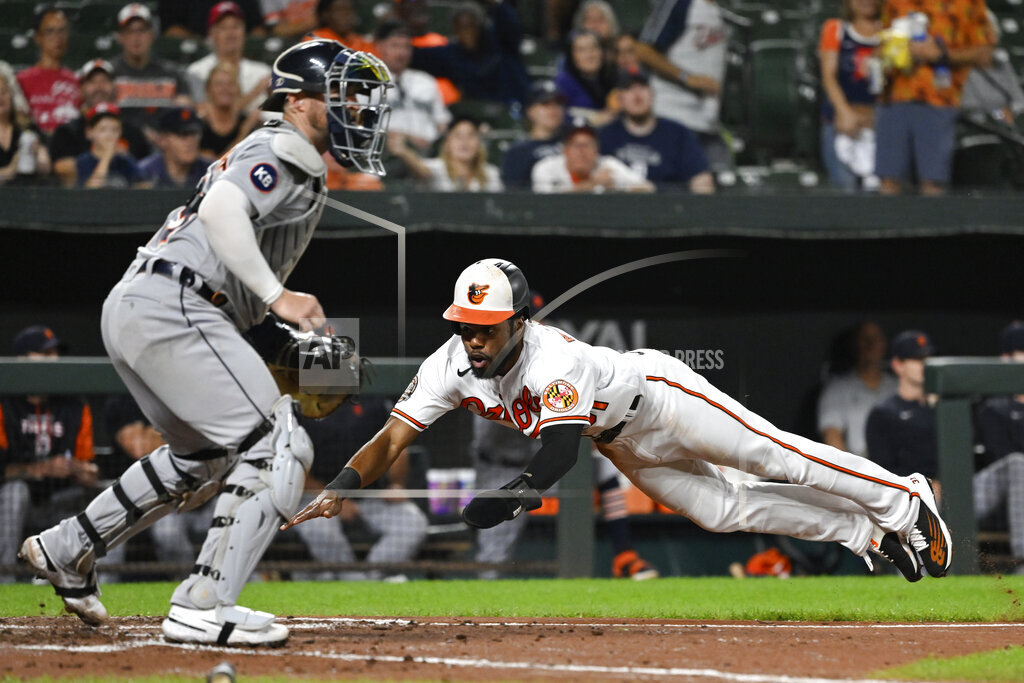 Orioles 8, Tigers 1 – Lyles throws complete game as Orioles beat Tigers 8-1
Jordan Lyles threw the second complete game of his career, Kyle Stowers homered and drove in three runs, and the Baltimore Orioles avoided their first-ever season sweep by the Detroit Tigers with an 8-1 victory. Rookie Gunnar Henderson and two hits and an RBI for the Orioles, who snapped a nine-game losing streak to Detroit dating to last season. Baltimore moved within four games of Seattle for the AL’s third and final wild card. Lyles allowed one run on three hits with six strikeouts and no walks, throwing 94 pitches. His previous complete game occurred on Sept. 30, 2012, for Houston against Milwaukee.

Guardians 8, White Sox 2 – Kwan, McKenzie pace Guardians to 8-2 victory over White Sox
Steven Kwan homered among his three hits and Triston McKenzie struck out 13 as the Cleveland Guardians beat the Chicago White Sox 8-2 to move closer to their first American League Central title since 2018. Kwan had hits in each of his first three at-bats, capped by his fifth homer of the season off Lance Lynn (7-6) on the first pitch of the fourth inning. The Guardians (82-67) have won seven of their last eight games while reducing their magic number for winning the division to seven. Cleveland is assured of winning the division in the event of finishing in a tie for first with Chicago. McKenzie (11-11) gave up two runs and six hits while matching his career high with eight innings.

Cubs 4, Marlins 2 – Happ’s sacrifice fly caps 3-run rally, Cubs beat Marlins 4-3
Ian Happ hit a go-ahead sacrifice fly in the eighth and the Chicago Cubs rallied to beat the Miami Marlins 4-3. Patrick Wisdom hit his 23rd homer for the Cubs. Down 3-1, the Cubs scored three in the eighth without a hit against Marlins relievers Steven Okert and Dylan Floro. Keegan Thompson (10-5) pitched three scoreless innings of relief. Activated from the injured list earlier Wednesday, Thompson allowed one hit and struck out six. For the second consecutive night, Marlins reliever Steven Okert got the loss after unable to hold a lead in the eighth. It was the Marlins’ 37th one-run loss, matching the club record set in 1993.

NFL – Fields clarifies remarks, says he didn’t mean to offend fans
Chicago quarterback Justin Fields took time to clarify comments he made following the loss to the Green Bay Packers. He says he did not mean to come off as dismissive of Bears fans. Fields drew some criticism on social media for saying after the game the loss “hurts more in the locker room” and that fans “aren’t putting in any work.” Fields said Wednesday he meant fans weren’t putting in the work “regarding the game on Sunday.” He also said he was “frustrated” and didn’t even want to conduct his mandatory postgame news conference.

NFL – Colts scrambling to find quick fix for stagnant offense
The Indianapolis Colts’ offense is built around Matt Ryan and Jonathan Taylor. Ryan was the league’s MVP in 2016. Taylor is the defending rushing champ. And yet two weeks into the season, the Colts have the league’s lowest-scoring offense at 10 points per game. Even worse: Patrick Mahomes and the high-octane Kansas City Chiefs are coming to town Sunday. Ryan, Taylor and coach Frank Reich are scrambling to find solutions so they can avoid remaining winless.

NCAAFB – Irish looking for offense to take advantage of Tar Heels ‘D’
Notre Dame’s choppy offense finally found smoother sailing last weekend. First-year coach Marcus Freeman wants to see the unit go full steam ahead at North Carolina. The Fighting Irish struggled under starting quarterback Tyler Buchner before he went down with a season-ending injury after Week 2. And Drew Pyne, Buchner’s replacement, finished strong in Notre Dame’s first win. But while the Irish offense ranks among the worst in the FBS, the same is true of the North Carolina defense. The Tar Heels tried to fix their problems during the bye week, but Freeman knows Notre Dame needs the offense to pull its weight Saturday.

NBA – Bulls’ Lonzo Ball to have knee surgery, miss start of season
Chicago Bulls guard Lonzo Ball is scheduled to have surgery on his left knee next week for the second time in less than a year and figures to miss the start of the season. The Bulls said Ball will undergo an arthroscopic debridement Wednesday in Los Angeles. He will be re-evaluated in four to six weeks. Ball played a major role in Chicago’s resurgence last year after being acquired from New Orleans in a sign-and-trade deal. He was limited to 35 games and did not play after Jan. 14. Ball had surgery for a torn meniscus two weeks later.

NBA/WNBA – Suspended Sarver says he’s decided to sell Suns, Mercury
Robert Sarver says he has started the process of selling the Phoenix Suns and Phoenix Mercury, a move that comes only eight days after he was suspended by the NBA over workplace misconduct including racist speech and hostile behavior toward employees. Sarver made the announcement Wednesday, saying selling “is the best course of action.” He has owned the teams since 2004, when he purchased it for about $400 million. He is not the lone owner, but the primary one. Forbes recently estimated the value of the Suns at $1.8 billion.

WNBA – Griner’s absence from World Cup weighing on US teammates
Brittney Griner’s absence is weighing on the minds of her USA Basketball teammates, who are trying to fill the void created by her absence as they prepare for the FIBA World Cup that begins Thursday in Australia. The Americans are expected to win without the 6-foot-8 Griner, but replacing her spirit and impact on and off the court is a challenging task. The team is keeping her in their thoughts by having no one wear her No. 15. For years, the Americans wore jersey numbers 4-15. In the World Cup they will use 4-14 and No. 16. Brionna Jones will be wearing No. 16.

NHL – Training camps open around NHL after another short offseason
Training camps open around the NHL this week less than 90 days since Colorado won the Stanley Cup. Players are used to the short summers by now after the pandemic squeezed the past two offseasons. But this is the return to the normal calendar of meaningful hockey from October through mid-June. A full camp for teams with new coaches and those who took over last season also has its benefits.

Nassar – Ex-coach’s Nassar-related conviction will not be reinstated
The Michigan Supreme Court won’t reinstate the conviction of a former Michigan State University gymnastics coach who was accused of lying to investigators about campus sports doctor Larry Nassar. The state’s highest court declined to take an appeal from the attorney general’s office. Prosecutors had widened their investigation beyond Nassar, who pleaded guilty to sexually abusing athletes, mostly female gymnasts. But prosecutors now have lost two high-profile cases. Kathie Klages was sentenced to 90 days in jail for lying to police about what she knew about Nassar back in 1997. But the Michigan Court of Appeals in December threw out her conviction and said her statements in a 2018 interview with were not crucial.