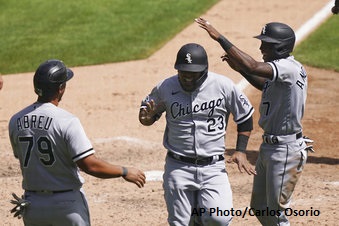 Baseball yesterday…
White Sox 7,  Tigers 5
Tim Anderson had four hits and finished a double shy of the cycle, and Luis Robert hit a bases-clearing double to lift the White Sox to a 7-5 victory over the Tigers. Anderson and Eloy Jimenez led off the game with consecutive home runs, and Anderson added a triple by the end of the third inning. Jonathan Schoop and Willi Castro homered for the Tigers, who scored four unearned runs in the fourth to take the lead before Matthew Boyd gave the lead right back the following inning.

Cubs 7,  Cleveland 2
Kyle Hendricks pitched six strong innings and Anthony Rizzo homered, leading the Cubs to a 7-2 win over Cleveland. At 12-3, the Cubs are off to their best start after 15 games since 1970. Hendricks didn’t have much trouble with the slumping Indians, who came in batting a major league-worst .192. Kris Bryant also homered for the Cubs.

Baseball tonight…
Milwaukee (Brett Anderson) at Cubs (Yu Darvish),  7:15
The Tigers and White Sox are off

Notre Dame says 117 football players were tested for COVID-19 on Monday and two tested positive. The university says of the two positive tests, one player was mildly symptomatic and the other was asymptomatic. Both are in isolation. Also, through contact tracing seven football players are in quarantine, all of them asymptomatic. Additionally, 43 staff members were tested and all came back negative. Overall, the university has administered 619 COVID-19 tests to members of the football program and athletic department staff with four positive tests and two student-athletes have since recovered.

The Great Lakes Intercollegiate Athletic Conference announced that they have suspended all sports competition until Jan. 1. GLIAC member schools include Grand Valley State, Ferris State, Davenport, Saginaw Valley, and Wayne State. The conference will continue to gather information and monitor developments in order to try and restart sports schedules in the second semester. The winter and spring sports competition calendar will be announced at a later date.

The Big 12 Conference is moving ahead with plans to play college football and other fall sports. They will join the Atlantic Coast and Southeastern conferences in taking the field amid the coronavirus pandemic. The Big 12 board of directors approved a plan to begin fall sports after Sept. 1 after the Big Ten and Pac-12 announced they would not play this fall. The Big 12 football schedule allows each team to play one non-conference game before league play begins Sept. 26.

The Big South Conference has decided to delay its fall sports seasons with hopes of playing in the spring. But it will allow football-playing members to schedule up to four non-conference games in the fall at their own discretion. Commissioner Kyle Kallander says the decision was made to protect student-athletes during the coronavirus pandemic.

Indiana Pacers coach Nate McMillan has agreed to a contract extension. Terms of the deal were not immediately available. McMillan has led the Pacers to the playoffs in all four of his season since taking the job before the 2016-17 season. He is 181-136 with Indiana and needs one more win to break a tie with Rick Carlisle for third in career victories in the Pacers’ NBA history.

Milwaukee Bucks forward Giannis Antetokounmpo has been suspended for Milwaukee’s final game of the regular season. The NBA’s reigning MVP was punished for headbutting Washington’s Moe Wagner. It’s unknown if Antetokounmpo would have played in Thursday’s game against Memphis anyway, given that the Bucks have already secured the No. 1 overall seed in the NBA playoffs. Antetokounmpo will be eligible for Game 1 of the Bucks’ first-round series against Orlando.

Lawyers representing dozens of Black former University of Michigan student-athletes who say they were abused by a sports doctor who worked there for decades are asking the university to treat them fairly as it settles hundreds of lawsuits expected. They’re demanding that victims of Dr. Robert Anderson receive fair compensation “based on their trauma rather than based on their color.” Attorney Parker Stinar says most personal injury cases are settled out of court with amounts often based on data that projects lower lifetime earnings for Blacks, Latinos and women than white men. Stinar says nearly half of the 750 men claiming to have been sexually abused by Anderson are Black.