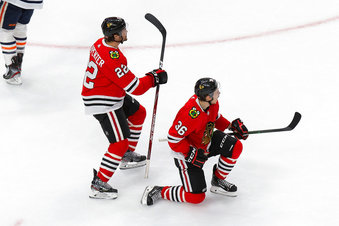 Adrian Houser dominated over seven innings as Milwaukee beat the White Sox 1-0 to snap Chicago’s six-game win streak. The Brewers held struggling star Christian Yelich out of the lineup, with the 2018 NL MVP and two-time defending NL batting champion mired in a season-opening 3-for-34 slump. The Brewers ended Chicago’s best streak since a six-game run in April 2017. Houser simply dazzled on a night when Dallas Keuchel was about as good for Chicago. The 27-year-old right-hander gave up five hits and struck out five. Eric Sogard drove in Mark Mathias with a single in the third, and that was all Milwaukee needed.

The Tigers were off again. They return to action Friday.

NHL Playoffs last night…
Matthew Highmore tied the score with 5:47 left in the third period, and Jonathan Toews got his second of the game 4 1/2 minutes later to give the Chicago Blackhawks a 4-3 win over the Edmonton Oilers in Game 3 of their qualifying round series. On the winner, Oilers defenseman Ethan Bear errantly tipped a Chicago point shot off Toews and past goalie Mikko Koskinen. It was Toews’ fourth goal of the series. Olli Maatta also scored for the Blackhawks, and Corey Crawford finished with 25 saves. Leon Draisaitl scored twice for Edmonton, and Connor McDavid got his fifth of the series. Koskinen had 21 saves.

White Sox second baseman Nick Madrigal is headed to the 10-day injured list because of a separated left shoulder. General manager Rick Hahn was optimistic the rookie will return by the end of the month, though he also said Wednesday offseason surgery might be needed. Madrigal was hurt sliding into third trying to advance from first on a single to center at Milwaukee on Tuesday. Hahn also said slugger Edwin Encarnación is day to day after leaving Tuesday’s game because of inflammation near his left shoulder, in the joint between his collarbone and sternum.

Major League Baseball is cracking down on coronavirus safety protocols, mandating that players and staff wear face coverings at all times, including in the dugouts and bullpens, except for players on the field of play. The league sent a memo to teams Wednesday outlining changes to its 2020 operations manual after outbreaks on the Miami Marlins and St. Louis Cardinals led to 21 postponements in the first two weeks of a shortened 60-game season. The memo, obtained by The Associated Press on Wednesday night, says that repeated or flagrant violators of the protocols could be banned from participating in the 2020 season and postseason.

NCAA President Mark Emmert tells The Associated Press that whether college sports — and more specifically major college football — can play through the coronavirus pandemic is likely to be determined not by the association or even conferences but on school-by-school basis. Another hectic day in college sports news started with UConn canceling its football season before the Big Ten released its revised schedule for the coming season. Games are just a month away. The NCAA Board of Governors handed off any decision on whether to hold championships for fall sports such as soccer and lower-level football to each division. Divisions II and III quickly pulled the plug. As for Division I, plans for a season are methodically falling into place but with tempered optimism.